NANNY OF THE MAROONS 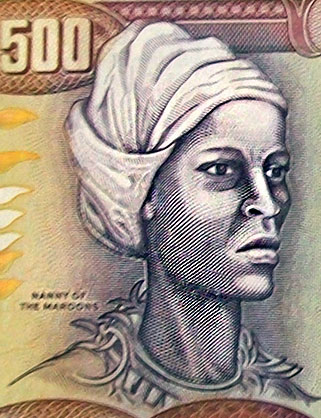 Nanny was a leader of the Maroons at the beginning of the 18th century. She was known by both the Maroons and the British settlers as an outstanding military leader who became, in her lifetime and after, a symbol of unity and strength for her people during times of crisis.

She was particularly important to them in the fierce fight with the British, during the First Maroon War from 1720 to 1739. Although she has been immortalised in songs and legends, certain facts about Nanny (or “Granny Nanny”, as she was affectionately known) have also been documented.

Both legends and documents refer to her as having exceptional leadership qualities. She was a small, wiry woman with piercing eyes. Her influence over the Maroons was so strong, that it seemed to be supernatural and was said to be connected to her powers of obeah. She was particularly skilled in organising the guerilla warfare carried out by the Eastern Maroons to keep away the British troops who attempted to penetrate the mountains to overpower them.

Her cleverness in planning guerilla warfare confused the British and their accounts of the fights reflect the surprise and fear which the Maroon traps caused among them.

Besides inspiring her people to ward off the troops, Nanny was also a type of chieftainess or wise woman of the village, who passed down legends and encouraged the continuation of customs, music and songs, that had come with the people from Africa, and which instilled in them confidence and pride.

Her spirit of freedom was so great that in 1739, when Quao signed the second Treaty (the first was signed bv Cudjoe for the Leeward Maroons a few months earlier) with the British, it is reported that Nanny was very angry and in disagreement with the principle of peace with the British, which she knew meant another form of subjugation.

There are many legends about Nanny among the Maroons. Some even claim that there were several women who were leaders of the Maroons during this period of history. But all the legends and documents refer to Nanny of the First Maroon War, as the most outstanding of them all, leading her people with courage and inspiring them to struggle to maintain that spirit of freedom, and life of independence, which was their rightful inheritance.

On March 31, 1982 the Right Excellent Nanny of the Maroons was conferred the Order of the National Hero as per Government Notice 23 Jamaica Gazette along with Sam Sharpe.