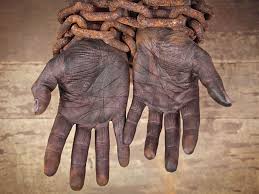 It is a sad and tragic fact that those of us from the diaspora who were born in the Caribbean and/or whose parents/grandparents were born there, are descended from enslaved Africans. Our history consists of so much more than this particular aspect however it is an aspect of our history and therefore this Encyclopaedia will cover it.

We have nothing to be ashamed of regarding this but rather, those who were the slave-holders who should hold the shame for this aspect of what is also their history. We are part of their history because they made us a part of it. What appears below demonstrates how the English Parliament felt about people of African origin. This is important because it informs how a system of belief that people who are not white are not equal citizens or human beings can still prevail and manifest in the systems and treatment of people of African ancestry, today.

In the House of Commons, (the lower chamber of the Houses of Parliament; the upper chamber being the House of Lords), in London, England on 15 May 1823, a debate took place regarding the abolition of slavery.

For context, below is part of the address of MP Fowell Buxton, who believes that the motion that only adult enslaved people and not their children should be freed, should not be carried. Buxton wants both the children and the adults to be freed. Please note the language that is used by someone who wants to free our enslaved ancestors.

It is a crime to go to Africa, and steal a man, and make him a slave. For two centuries this was no crime at all. It was most just and innocent commerce. My hon. friend (Mr. Wilberforce) instituted an inquiry into this innocent traffic, and it turned out to be a most intolerable enormity. It is a crime, then, by the laws of England, to make the full-grown African a slave. And how is it less a crime, to make a new-born Creole a slave? I say, it is as great, it is even a greater crime. The African has at least passed a considerable portion of his life in freedom: for twenty or thirty years, he has tasted the innumerable enjoyments which liberty confers. But, the child who is made a slave from his birth, knows nothing but servitude and misery. Then, as to guilt. Formerly we divided it with another party. The black factor made the man a slave; that was his share of the guilt. We kept him as a slave; that was our share. But, in the case of the child whom we enslave, the whole abomination is our own. We make him a slave, in the first place: we use him as a slave, in the second. It is a crime to murder a man: it is no less a crime to murder a child. It is a crime to rob a man: it is no less a crime to rob a child. It is a crime to enslave a man: and; is it no crime to enslave a child?

Now, Sir, let the House observe the moderation with which we proceed. We say, “Make no more slaves—desist from that iniquity—stop—abstain from an act, in itself as full of guilt, entailing in its consequences as much of misery, as any felony you can mention.” We do not say, “Retrace your steps;” but “Stop.” We do not say, “Make reparation for the wrong you have done;” but, “Do no more wrong; go no further.” Slave-trading and slavery (for they are but two parts of the same act), are the greatest crime that any nation ever committed: and when that day comes, which shall disclose all secrets, and unveil all guilt, the broadest and blackest of all will be that, the first part of which is Slave-trading, and the last part slavery; and no nation under heaven has ever been so deeply tainted with both the one and the other as we have been. To a nation thus steeped in this species of iniquity, can less be said than this: “We do not ask that you should suffer punishment; we do not ask that you should undergo deep humiliation; we do not ask that you shall make reparation to those you have wronged; we do not even say, cease to enjoy those acts of criminality which you-have begun; but, take the full benefit and fruition of past and present injustice; complete what you have commenced; screw from your slave all that his bones and his muscles will yield you: only stop there; and, when every slave now living shall have found repose in the grave, then let it be said, that the country is satiated with slavery, and has done with it for ever.”

But, alas, Sir! the slave is not ripe for liberty. The bitterest reproach that can be uttered against the system of slavery’, that it debases the man, that it enfeebles his powers, that it changes his character, that it expels all which is naturally good; this, its bitterest reproach, must be its protection. We are foiled by the very wickedness of the system. We are obliged to argue in a most vicious circle. We make the man worthless; and, because he is worthless, we retain him as a slave. We make him a brute, and then allege his brutality, the valid reason for withholding his rights.

The very root of your claim is robbery, violence, inconceivable wickedness. If any thing on earth was ever proved by evidence, it was proved, before the slave-trade committee, that the method of obtaining slaves in Africa was robbery, man-stealing, and murder. Your pure title rests on these sacred foundations! If your slave came direct from Africa, your right to his person is absolutely nothing. But, your claim to the child born in Jamaica is (if I may use the expression) less still. The new-born infant has done—can have done—nothing to forfeit his right to freedom. And, to talk about rights, justice, equity, and law, as connected with slavery, is to talk downright nonsense. If we had no interest in the case, and were only speaking of the conduct of another nation, we should all use the same language; and we should speak of slavery, as we now speak of slave-trading: that is, we should call it rank, naked, flagrant, undisguised injustice.

For all the blood spilt in African wars fomented by English capital—for civil war which we contrived to render interminable—for all the villages set in flames by the contending parties—for all the horrors and the terrors of these poor creatures, roused from their rest by the yells of the man-hunter whom we sent—for civilization excluded—for the gentle arts which embellish life excluded—for honest and harmless commerce excluded—for Christianity, and all that it comprehends, expelled for two centuries from Africa—for the tens and tens of thousands of men murdered in these midnight marauds—for the tens and tens of thousands suffocated in the holds of our slave-ships—for the tens and tens of thousands of emaciated beings, cast ashore in the West Indies, emaciated beings, “refuse men” (for such was the mercantile phrase) lingering to a speedy death—for the tens and tens of thousands still more unhappy who, surviving, lived on to perpetual slavery, to the whip of the taskmaster, to ignorance, to crime, to heathen darkness—for all these, we owe large and liberal atonement. And I do thank God, we still have it in our power to make some compensation. We have it in our power to sweeten a little the bitterness of captivity—to give the slaves of the West Indies something to render life more endurable—to give them something like justice and protection—to interpose a jury between the negro and the brutality of his master’s servant—to declare that the slave shall not be torn from the cottage he has built, from the children he has reared, from the female whom he loves—above all, for that is effectual compensation, we may give him the truths of the Christian religion, which, as yet, we have withheld.

For his children, there is a wider range of recompence. We may strip them of every vestige of servitude; and, by taking upon ourselves, for a season, the whole burthen of their maintenance, education, and religious instruction, we may raise them into a happy, contented, enlightened, free peasantry. I conclude, as I concluded my letter to lord Bathurst—God grant, that his majesty’s ministers may be disposed to accomplish these objects, or to permit others to accomplish them!—I move.