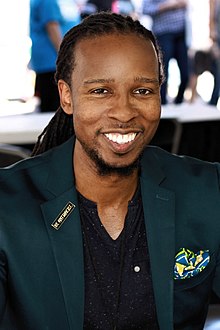 Kendi was born Henry Rogers on 13 August, 1982 in Jamaica, Queens, New York to parents who came of age during the Black power movement in New York City, USA. They were student activists and Christians inspired by Black liberation theology. While Kendi was in high school, his family moved from Jamaica, Queens, to Manassas, Virginia. He traveled further south and attended Florida A&M University, where he majored in journalism. He initially aspired for a career in sports journalism, freelancing for several Florida newspapers, and interning at USA Today Sports Weekly, as well as in the sports sections of the Mobile Register and Atlanta Journal-Constitution. By the end of his tenure at FAMU, he had become alienated from sports journalism and increasingly interested in engaging in racial justice work. He picked up a second major in African American Studies and graduated in 2004.

After working for a time as a journalist at The Virginian Pilot, Kendi pursued his graduate studies. At 27 years old, he earned his doctoral degree in African American Studies from Temple University in 2010. Kendi has taught at SUNY Oneonta, SUNY Albany, the University of Florida, and American University. In 2017, he became a full professor, the highest professorial rank, at 34 years old.

Kendi has been visiting professor at Brown University, a 2013 National Academy of Education/Spencer Postdoctoral Fellow, and postdoctoral fellow at the Rutgers Center for Historical Analysis. He has also resided at The John W. Kluge Center at the Library of Congress as the American Historical Association’s 2010-2011 J. Franklin Jameson Fellow in American History. In the summer of 2011, he lived in Chicago as a short-term fellow in African American Studies through the Black Metropolis Research Consortium. He has received research fellowships, grants, and visiting appointments from a variety of other universities, foundations, professional associations, and libraries, including the Lyndon B. Johnson Library & Museum, University of Chicago, Wayne State University, Emory University, Duke University, Princeton University, UCLA, Washington University, Wake Forest University, and the historical societies of Kentucky and Southern California. In 2019, The Root 100 listed him as the 15th most influential African American between the ages of 25 and 45 and the most influential college professor. Kendi was awarded the prestigious Guggenheim Fellowship in 2019.

Kendi strives to be a hardcore antiracist and softcore vegan. He enjoys joking it up with friends and family, partaking in African American culture, weight-lifting, reading provocative books, discussing the issues of the day with open-minded people, and hoping and pressing for the day the New York Knicks will win an NBA championship and for the day this nation and world will be ruled by the best of humanity.

In 2013, he changed his middle name from Henry to Xolani (meaning “Peace” in Zulu) and surname from Rogers to Kendi when he wed Sadiqa Kendi, a pediatric emergency physician from Albany, Georgia. They chose their new name together and unveiled “Kendi,” meaning “loved one” in Meru, to their family and friends at their wedding. Their wedding photos, including Sadiqa’s beautiful gold dress, were featured in Essence Magazine.

He is one of America’s foremost historians and leading antiracist voices. He is a National Book Award-winning and #1 New York Times bestselling author. Kendi is the Andrew W. Mellon Professor in the Humanities and the Founding Director of the Boston University Center for Antiracist Research. Kendi is a contributor writer at The Atlantic and a CBS News correspondent. He will become the 2020-2021 Frances B. Cashin Fellow at the Radcliffe Institute for the Advanced Study at Harvard University.

Kendi is the author of THE BLACK CAMPUS MOVEMENT, which won the W.E.B. Du Bois Book Prize, and STAMPED FROM THE BEGINNING: THE DEFINITIVE HISTORY OF RACIST IDEAS IN AMERICA, which won the National Book Award for Nonfiction in 2016. At 34 years old, Kendi was the youngest ever winner of the NBA for Nonfiction. He grew up dreaming about playing in the NBA (National Basketball Association), and ironically he ended up joining the other NBA.

Kendi has published fourteen academic essays in books and academic journals, including The Journal of African American History, Journal of Social History, Journal of Black Studies, Journal of African American Studies, and The Sixties: A Journal of History, Politics and Culture. He has published op-eds in numerous periodicals, including The New York Times, The Guardian, Washington Post, London Review, Time, Salon, Diverse: Issues in Higher Education, Paris Review, Black Perspectives, and The Chronicle of Higher Education. He commented on a series of international, national, and local media outlets, such as CNN, MSNBC, NPR, Al Jazeerah, PBS, BBC, Democracy Now, OWN, and Sirius XM. A sought after public speaker, Kendi has delivered hundreds of addresses over the years at colleges and universities, bookstores, festivals, conferences, libraries, churches, and other institutions in the United States and abroad.