Black British history: the row over the school curriculum in England 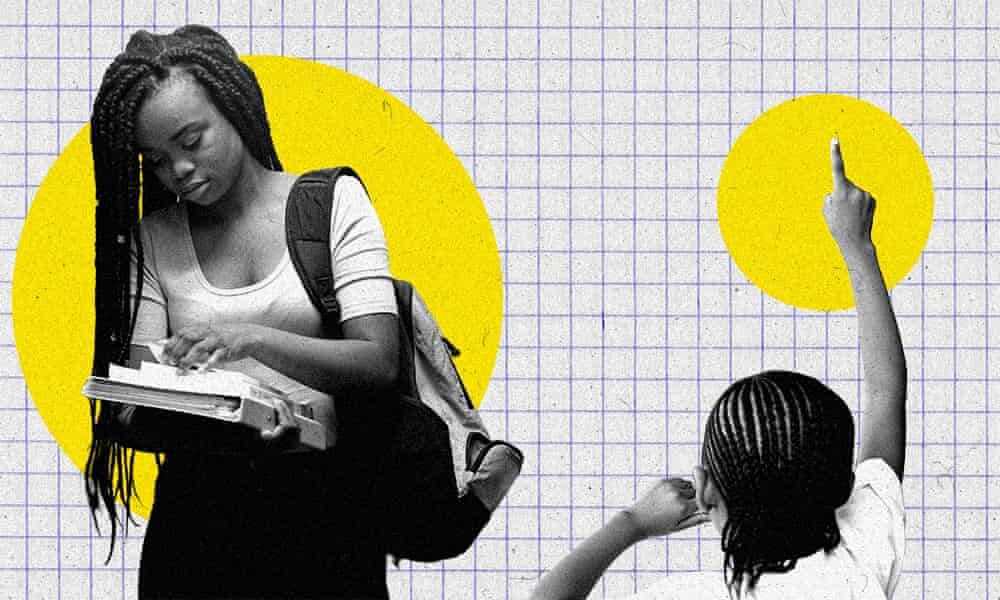 From the omission of the black Tudors to the absence of empire, data reveals how GCSE history is taught.

In Britain, one focus of the Black Lives Matter movement has been how we tell the history of the country. Beyond the protests about statues, young people have been campaigning against changes to the national curriculum in England made in 2014.

When the then education secretary, Michael Gove, announced he wanted to refocus the teaching of history in schools to “celebrate the distinguished role of these islands in the history of the world”, he removed the curriculum’s explicit focus on racial and ethnic diversity, particularly within Britain.

Though some of his more extreme ideas were dropped after opposition from teachers and academics, his changes meant the teaching of black history became optional.

This has led to black people being almost entirely written out of the version of British history taught in schools, says Lavinya Stennett, the founder of the Black Curriculum, an education social enterprise that delivers black British history in schools.

GCSE exam data collated by the Guardian shows that although schools are permitted to teach black history, as well as the history of people outside Europe and the US, few of them do.

Up to 11% of GCSE students are studying modules that refer to black people’s contribution to Britain. And less than one in 10 are studying a module with a focus on empire, despite this being a significant feature of the last 400 years of British history.

This finding is backed by a survey of 50,000 people that explores the history participants learned at school.

Of the 59 GCSE history modules available from the three biggest exam boards, Edexcel, AQA and OCR, 12 explicitly mention black history. Only five mention the history of black people in Britain, the rest are about black people in the US, other countries or the transatlantic slave trade.

Of the five that cover black history in Britain, three include migration, one deals with empire in the 17th and 18th century, and one mentions race relations in postwar Britain in a thematic study of power over an 850-year period.

This means up to 11% (approx 28,412) of GCSE students in 2019 were studying modules that made any reference to the contribution of black people in British history.

No modules in the GCSE syllabus for the most popular exam board, Edexcel, mention black people in Britain.

Yet there have been black people in Britain since at least the Romans arrived as well as black communities of sorts since the 1500s, as David Olusoga chronicles in his book Black and British. They include a trumpeter in Henry VIII’s court who wrote to the king asking for a pay rise, seamen at the battle of Trafalgar and soldiers fighting for Britain in both world wars.

And of course white British people have been in Africa: running the transatlantic slave trade to the Caribbean and the US and occupying the likes of modern-day Nigeria and Kenya to Egypt and South Africa.

A spokesperson for Edexcel’s parent company Pearson said they are planning to introduce a module about migration in Britain that will cover black British history, and that work on this will be accelerated in light of recent events. They said that diversity and inclusiveness “is an absolute priority for us and we’ve worked hard to ensure that our history GCSE qualification covers a range of cultures and countries … We always encourage feedback and take action on it where possible”.

What are the effects of this missing history?

The consequences of this missing history, in Stennett’s words, is that many people do not know why Britain is the way it is today. “People are not aware of the contributions that were made [by black people] to Britain. Also, they don’t understand their classmates or the people around them,” she says.

This omission harms black Britons, Stennett says. “The whole basis of the Windrush scandal was that ‘these people don’t belong here’, that their citizenship could be revoked. It makes me feel like we don’t belong, like we’ve never made any contribution,” she says. “That is not the truth.”

Everyday life for black Britons is permeated by this history, according to Esmie Jikiemi-Pearson, the 19-year-old co-creator of the Impact of Omission, including how microaggressions play out.

“When black people say, ‘Please can you not touch my hair,’ people think it’s about invading personal space. And it is to an extent, but you also have this history in this country about how black people were put into zoos and petted like animals,” she says. Human zoos including Somali people among others continued in Britain until the 20th century.

“People think you are overreacting when you’re like, ‘Can you please not do that.’ People think it’s PC culture. But when you do something like that it recalls a deeply painful and traumatic history that black people have to reckon with every single day.

“You can walk through the world, touching people’s hair because you think it looks fluffy but it’s a completely dehumanising thing that has its roots in human zoos. That’s the impact of omission, that people can walk around not thinking about the history of their actions.”

Nell Bevan, an 18-year-old who co-created the Impact of Omission with Jikiemi-Pearson, says: “I remember hearing adults say that you learn history so you can learn the mistakes that we used to make. But how can you avoid mistakes that you are not taught about?”

How do we get beyond the ‘slave’ and ‘victim’ narratives?

When black people feature in GCSE history lessons it is often in the context of the slave trade. Without the inclusion of other aspects of black history and a broader understanding of empire, the focus on slavery, though crucial, can reinforce narratives of black people as victims.

So it is also important, according to Clare Broomfield, the head of history at Villiers high school in Southall, Middlesex, for pupils to learn about different cultures before colonisation. “Studying the Mughal empire or the Benin kingdom moves away from the narrative that people of colour and black people are seen only as slaves or victims,” she says.

The data shows that a third of GCSE students studied the modules centred on non-European or American cultures. Of that third, 95% were studying one of two modules on China under Mao. Three other modules focus on non-European/American culture outside the context of an invasion: the Mughal Empire 1526-1707; South Africa 1960-94: the People and the State; and Conflict in the Middle East 1945-95. Less than 2% (4,228) of all students studied these topics at GCSE. For the purposes of this comparison we have classified Russian history as European history.

What happened to the empire?

It’s not just black history that is missing. Despite the Conservative party’s enthusiasm for “imperial heroes”, there is very little coverage of the empire in GCSE history lessons.

Although British historymakes up the vast majority of what pupils study at GCSE history, modules focusing on empire make up a small proportion of that.

Allowing that students study four modules, we calculated that only 9% (about 23,676 pupils) have studied modules that make significant reference to the British empire over the course of their two-year GCSE.

That is fewer than one in 10 learning about one of the most significant periods in British history over the past four centuries.

Of the eight modules that cover the British empire: only one tackles the subject directly, OCR’s the Impact of Empire on Britain 1688-c.1730. Three reference empire in relation to migration in Britain; one covers it in a general 1,200-year overview of warfare; and two reference empire in short period studies of the UK: Britain in Peace and War 1900-18, and Restoration England 1660-85.

In the syllabus for the most popular exam board, Edexcel, only one module, British America 1713–83: Empire and Revolution, makes a significant reference to the British empire. However, it is entirely focused on British colonisation of the US. A passing reference is made to Sir Walter Raleigh’s failed colonisation of Virginia in the module Early Elizabethan England 1558-88.

In contrast, there are 21 modules on British history that make little to no reference to the empire.

Can ‘Hitler and the Henrys’ be taught differently?

Peter Mandler, a leading historian based at Cambridge University, characterised the traditional focus of British history as “Hitler and Henrys”, making reference to the focus on the Nazis and the Tudors.

Yet even within these “traditional” topics, Broomfield says a wide range of perspectives can be drawn out. “The Tudors and 1066 can be taught in a way that includes the non-white or immigrant people who participated in them, eg the black Tudors, the Jewish immigrants who came with William the Conqueror Indian Lascar sailors,” she says, citing a few examples from the OCR migration course that she teaches.

However, schools face two significant obstacles to reform: a shortage of money and a lack of time among teachers.

Broomfield says it is difficult to buy textbooks on a small departmental budget: “Textbooks are expensive. My budget is not huge – even for the OCR GCSE migration course you need four textbooks at £12-£13 each. And if you are teaching more than 100 pupils, that soon adds up.”

Another problem is teachers’ lack of knowledge, she says. “It’s maybe something that you have never studied before yourself, so, particularly if you’ve taught about life in Nazi Germany for the last 25 years, you’re not going to want to change that.”

But Broomfield urges teachers to instead see it as a way for pupils to connect history to the world around them, and to learn about new topics themselves.

“From a teacher perspective, I have found it endlessly fascinating to discover all these new and exciting stories,” she says. “If we don’t teach this history, we lose that knowledge and understanding of how rich and culturally diverse our society has been since the Romans.”

Additionally, a series of changes to the education system means the national curriculum is taught fully only in local authority-run state schools – but not in academies, free schools or private institutions.

Stennett says when history is taught well, it has a positive influence on BAME pupils. “People feel seen where they were not seen before,” she adds. “It gives them a sense of identity and belonging in the classroom.”

According to Olusoga, the erasure of black history in Britain is an intentional feature of racism that he traces to Enoch Powell, whose search for a pre-colonial white England discards 400 years of British history and skips back to before the Elizabethans.

Whatever the intention – the combination of curriculum setting by politicians, modules offered by exam boards and schools’ take-up of those modules means that for today’s students the erasure of black people’s centuries-long contribution to Britain remains.

When asked whether the Department for Education was concerned about the low numbers studying either black history or the British empire, a spokesperson said: “The curriculum in our schools is already incredibly diverse and offers pupils access to different black history topics across all key stages, teaching children about significant figures from black and ethnic minority backgrounds to help them learn about our shared history with countries from across the world.”

A letter to Stennett from Nick Gibb, the minister for school standards, seen by the Guardian, reiterates areas where it is possible to study black history in the current history curriculum but rejects a request by the Black Curriculum to make it mandatory.

Notes on the data

Specific data about what history students learn at key stage 3 (aged 11-14) or in primary schools is not available. Within the curriculum laid out here for England’s key stage 3, schools are allowed to teach what they want. Fewer than half of students doing GCSEs in England, 45%, take history. But it is only at this stage that we can get information on the topics studied. Scottish and Northern Irish exam boards were unable to provide details about the modules taken at GCSE/national 5 level.