Black People On Display: The Forgotten History of Human Zoos

The other day I was searching for pictures of Somalia in the digitised French and British (Bristol) archives where historical items, like postcards, pictures and censuses, are stored. The furthest back I could go was during Somali’s colonisation by Italy, France and England. It wasn’t long until I came across postcards of my people in zoo enclosures titled ‘Somalis of the Grand Exhibition’. My ancestors had large beautiful ‘fros and wore long white robes. Held daggers in their hands. Their hair took any form it wanted to. In short, they were beautiful.

But it was hard to look at them, knowing what happened to them. It was hard to know that the person behind the lens would have been someone from colonial administration systematically documenting my people. Occasionally, something would be marked ‘South Somali’, and that would be it, the only indication of what I was looking at. That is all I had to piece together to form an understanding of my people’s past. While the colonisers were given names, biographies and obituaries, my ancestors, caught in these photographs, were unnamed and died without their stories.

Human zoos were exhibits of black and indigenous peoples caged and displayed in a ‘makeshift natural habitat.’ They were popularised during the 1870s, and continued to be popular into the 20th century.  Warsaw, Milan, London, New York, Antwerp, Hamburg, Norway, Belgium and Paris are only a few of the places that had human zoo exhibits – Channel 4’s programme ‘Race: Science’s Last Taboo’ noted that ‘hundreds of thousands of people visited these exhibitions.’ Although humans have been exhibited before – for example the notorious exhibition of Saarjtie Baartman in South Africa, known as ‘the Hottentot Venus’, human zoos were the first exhibitions of humans on a grand scale. They drew crowds of ‘tens of millions.’

World fairs were places where European countries would show off their technological achievements and spoils taken from their empires – including people. In 1878 and 1889, the Parisian World Fair drew crowds of 28 million people to their constructed “Negro villages”. Decades later in 1931, the ‘human zoo’ exhibition in Paris attracted 34 million visitors  in six months. During these exhibits, humans were displayed nude or semi-nude (Channel 4, Race: Science’s Last Taboo, 2009).

The Bradford World Fair of May 1904 had an exhibit of 100 Somalis which drew a paying crowd in their tens of thousands, and by the end of the exhibit in October 1904, 2.5 million people had visited. The Somalis had been toured through Europe and were forced to perform wrestling and spear-throwing. One child was born during their captivity, and one woman, Halimo Abdi Batel, died from tuberculosis. (“073,” n.d.)

Humans, specifically black and indigenous people, have been displayed over centuries and ‘studied’ in the name of ethnography. Ethnography is the study of different people and cultures, and was seen in the 19th and 20th centuries as a ‘fashionable science’ that studied and categorised ‘savage’ races to subjugate them. It has long been used to justify slavery, the genocide of indigenous peoples and colonialism. By deciding that indigenous people in the colonised lands were sub-human, it meant that white colonialists could in ‘good conscience’ rape, kill and pillage resources as they saw fit – because they were not dealing with humans, they were dealing with “savages”. Academics today still make arguments for eugenics and ethnography. Eugenics is the idea that your race determines your behaviour and mental intelligence.

Popularisation of Human Zoos in Europe

There were two men that popularised human zoos in Europe: Isidore G. Saint-Hilaire and Carl Hagenbeck. In these zoos humans were held in enclosures, and were made to perform ‘tribal’ dances, race animals, and live in their enclosures to entertain the paying public.

The Somali people, as well as with other indigenous people, were held in these zoos and zoos like it across the world. Part of the human zoo exhibit was to make the visitors feel like they were experiencing the zoo exhibits in their ‘natural’ dress and doing their ‘natural’ activities. Many of them froze to death in the cold, still wearing what was determined their ‘native dress,’ or died from diseases that did not exist in their native countries. For the Somalis for example, this was the enforced wearing of ‘white tunic like cloth’ and ‘sandals’ (Le Chenil, 1890).

Carl Hagenbeck and the Tierpark

Carl Hagenbeck was a German merchant of animals and humans, who supplied European zoos, as well as P.T. Barnum (of The Greatest Showman fame). He came up with the idea of exhibiting humans and animals in the same enclosure. In 1876, he took the Nubian people, along with animals from Egypt (now modern-day Sudan) and toured a ‘Nubian exhibit’ around Paris, Berlin and London. It proved incredibly popular. Hagenbeck also popularized human zoos in Europe with his exhibition of the Sami and Samoan people derogatorily known as ‘Laplanders’, in 1874 in his Hamburg Tierpark (Channel 4 Race: Science’s Last Taboo, 2009). 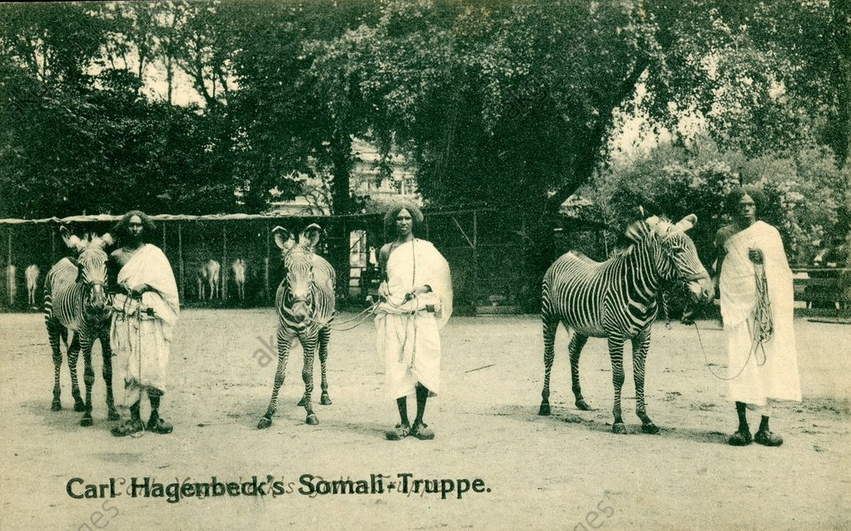 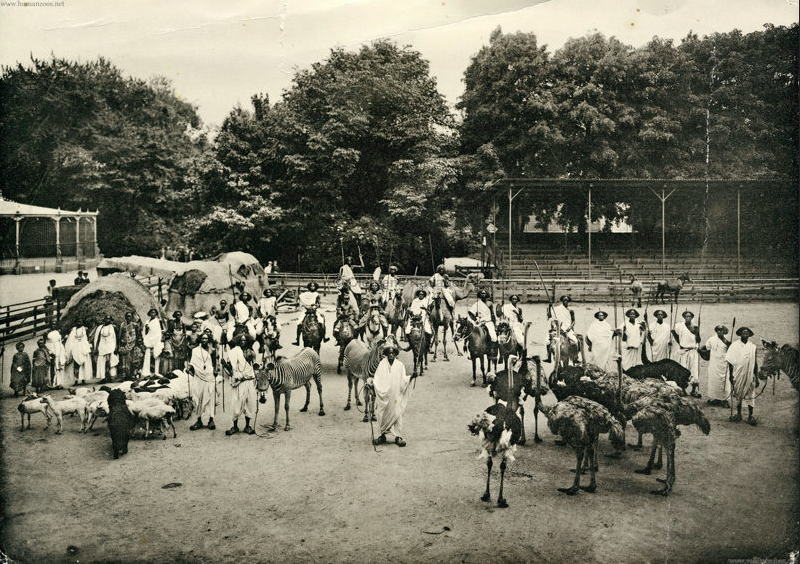 Isidore G. Saint Hilaire was the zoo director of Jardin D’acclimation. The Jardin d’acclimation was a zoo in Paris that included human exhibits during the late 19th century. In the ruins of these exhibits there is now an amusement park.

In 1877, Saint-Hilaire decided to organise exhibits displaying the Nubian and Inuit peoples. This doubled the zoo’s audience to 1 million that year. (Channel 4. Race: Science’s Last Taboo, 2009) Many of these exhibits were permanent ‘villages’ where kidnapped indigenous peoples lived, had children in and died in. One of these that are still standing, is the Dahomey Pavillion, which held the people of Dahomey, current day Benin, Africa. 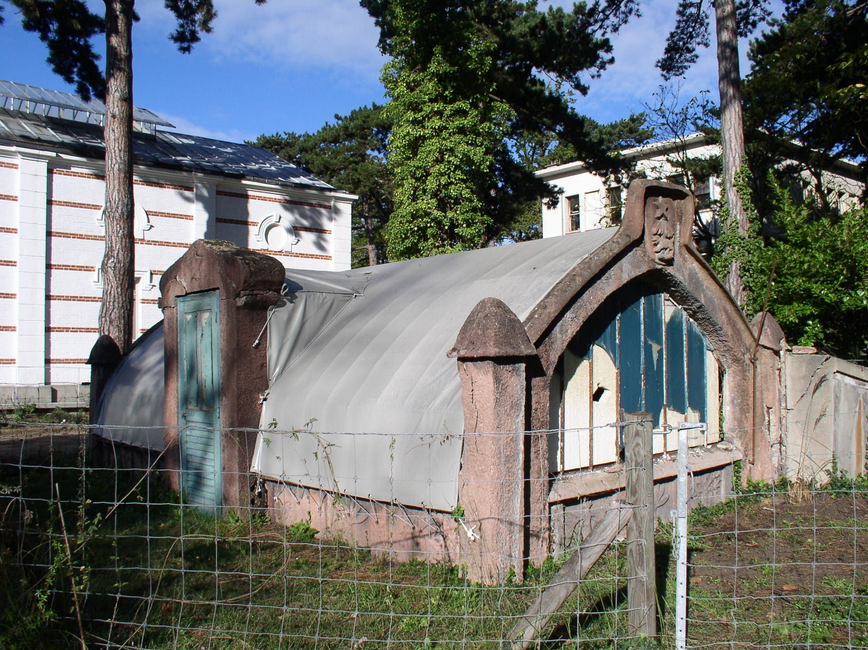 The Dahomey Pavilion Bois de Boulogne, Paris the former exhibit of the people of Benin. 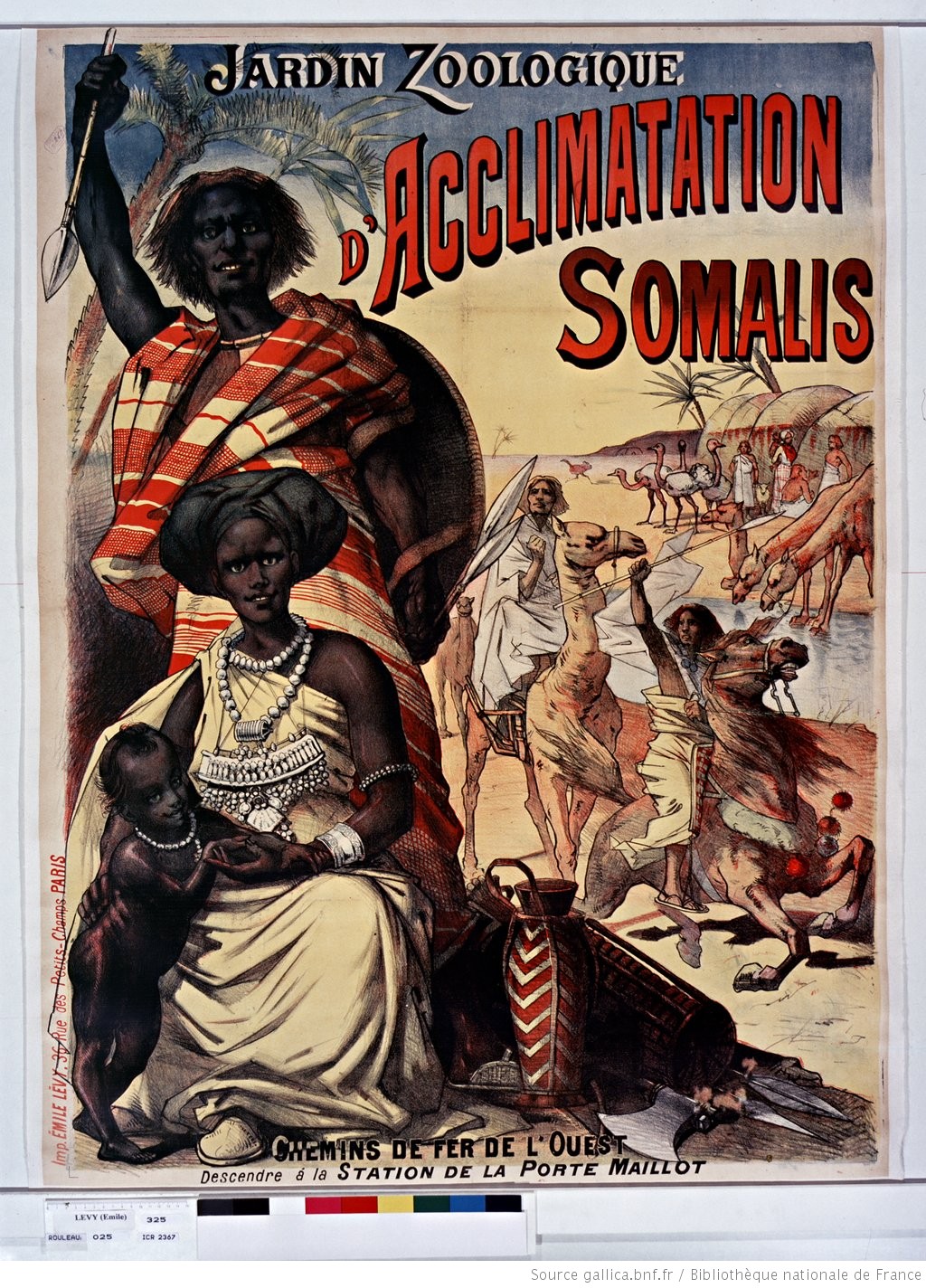 A reviewer at the zoo in 1890, describes a caravan of Somalis, including their camels and horses were brought to Jardin d’Acclimation, who ‘with a terrible authority,  use arrows, swords, clubs, sabres and daggers, scorning firearms (guns)’(Le Chenil, 1890)

In another review of the Jardin D’Acclimation, the Somalis are described as being part of a ‘grand parade, racing their animals at speeds yet unseen in this country.’

At the Jardin D’acclimation, part of the spectacle, apart from the caged exhibits, were the large parades of people from the exhibits on its’ lawn. One reviewer writes, ‘After the ‘Nubians’ we watched a parade on the lawn of “Eskimos” of the Pole, the “Savages” from the lands of Fire,  the “Guachos” of the Grassland, the ‘Arancas’ of West America, The ‘Gabilis’ of Guyana… the “red skins” of the praries of Missouri…the Ashantis of Equatorial Africa, the “Hottentots” of southern Africa… the “Laplanders” of the extreme north of Norway’. (Le Chenil, 1890) 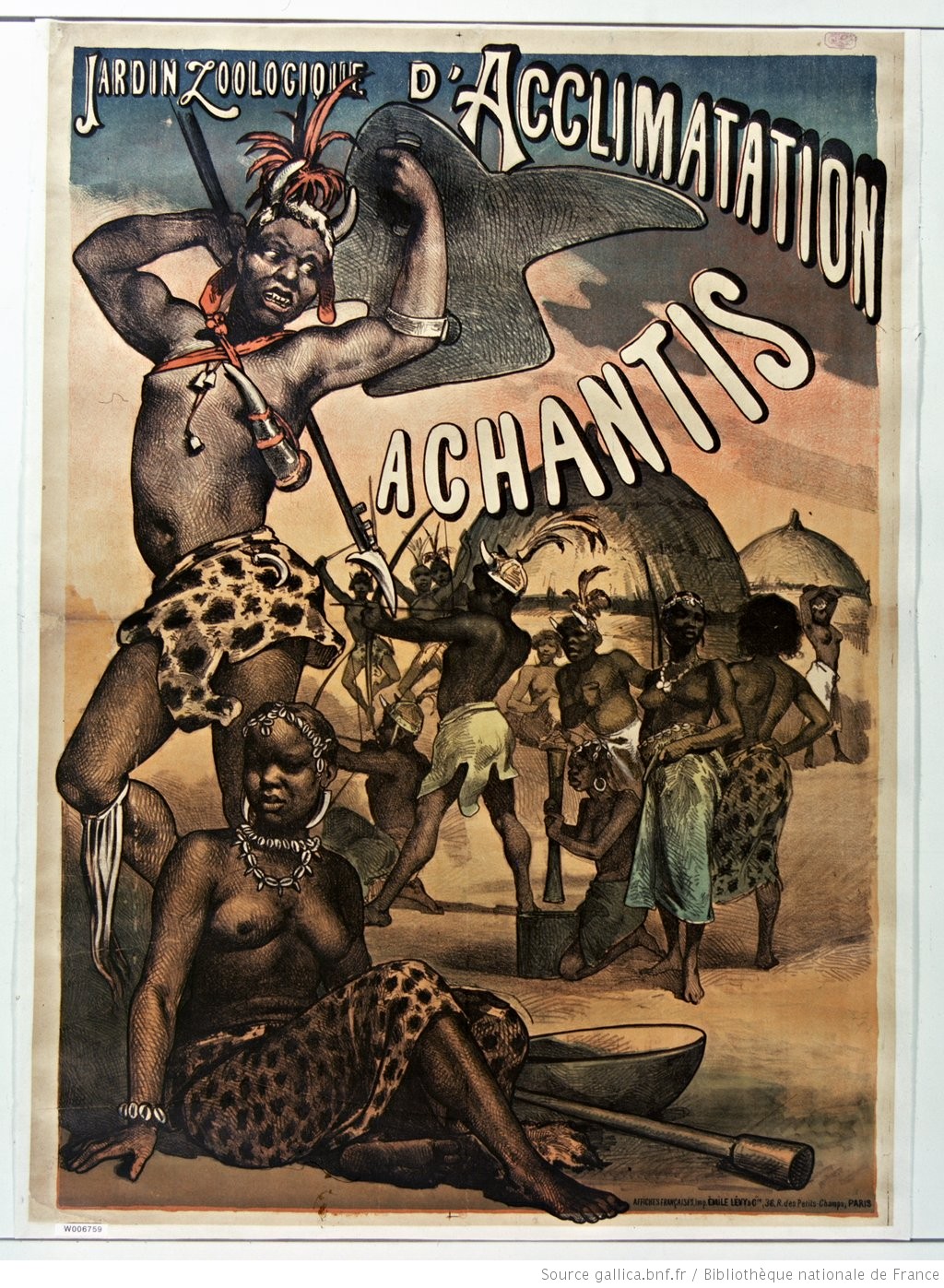 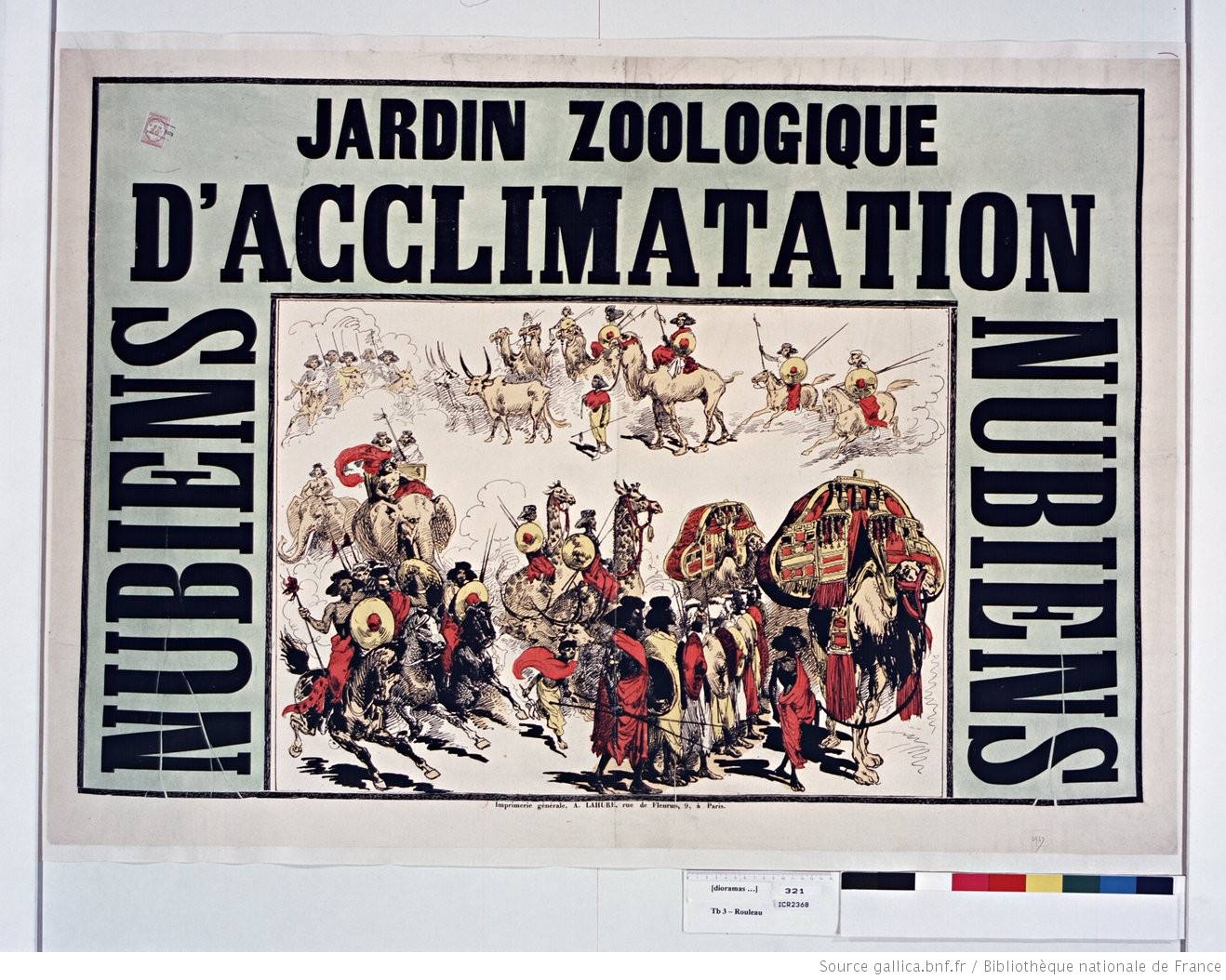 Along with the zoo exhibits, visitors could purchase an information guide for 1 franc, describing the humans in the exhibits in animalistic terms, e.g. their heights, bodies, colourings. The writer of pamphlet describes the Somali people in animalistic terms, describing their bodies, and their ‘colorings’ from ‘red brown to dark black,’ as well as writing ‘their kind is beautiful. Their ‘bodies are elegant, faces are “well made”’. It also describes them as a ‘race’ that is continuously fighting, stealing, looting, murdering with no remorse. They are also referred to as a ‘primitive’ people, who are resistant to progress, living as ‘hunter gatherers.’

Amongst the other indigenous peoples, the Africans, are described as ‘savage’, ‘polygamous’ and thus, sexually promiscuous. They’re also described as ‘being well made.’ The reviewer details the Ashanti’s heights, build, and colouring. The reviewer describes them as blood-thirsty, writing, ‘they have a blood fetish, they kill and sacrifice humans and this is why they cannot be considered civillised.’

The writer adds that getting the caravan to the zoo (with the Somalis and their camels and horses) was a hard-won battle because of how savage, brutish and religiously fanatical the Somalis were. He adds, ‘they have killed a long list of explorers who have tried to travel through their lands.’ In a paternalistic stance, the writer admires ‘their love of independence’ despite having colonised, kidnapped and caged them. (Guide du promeneur au Jardin zoologique d’Acclimatation du Bois de Boulogne, 1877)

This is commonplace of all texts during the colonial era. Black and indigenous people are described as “savages” placing them half-way between humanity and animals. Particularly in texts describing Africans it is suggested they are the left-behind uncivilised races. This paternalism, and idea that Africa is centuries behind the West, is one the West still cannot shake. 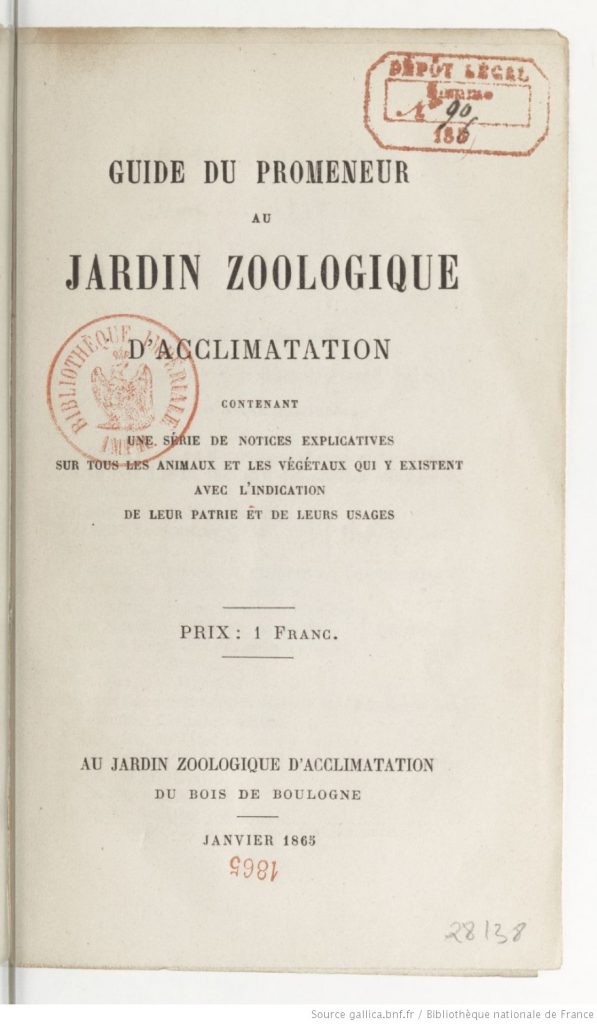 The humans who were kept in these zoos, died unknown and unremembered. They died away from their lands. Their countries continued to be colonised for decades afterwards.

Nothing has changed in the language used to describe BIPOC or black, indigenous people of colour, especially if they also happen to be Muslim. The headlines describing, ‘migrants’ as ‘illegal’ and ‘swarms’, from ‘shithole countries’as Trump stated, the Muslim ban,the detention centres for undocumented migrants in America, the ongoing Windrush scandals, and violent deportation of black people these infamous examples go on and on. BIPOC are still targeted by right-wing groups across Europe, for not integrating with society, for being distinctly other. The Somalis, my people, amongst others, are still seen as ‘fanatically religious’ ‘suspicious’ and ‘hostile.’ Even in sports reporting, black athletes are broken down into a series of muscles and joints. They are described as ‘powerful’ and their talents are always inked up to their genetics.There always seems to be an unsaid othering, objectifying, animalizing of them in the press. Young black men are commonly described as ‘thugs’ Tony Blair, only as recently as last week, blamed immigrants for the rise of the far right, saying they should have done a better job integrating.

We may not be in physical cages any more, but the othering, the racism, the rise of the far-right across Europe certainly makes me feel like a specimen, to be observed, tamed, controlled and expelled.

Jamaica Past (images)
Selected images from 1800 - 1923
Previous post Black British history: the row over the school curriculum in England
Next post SEKOU TOURE: ON CULTURE