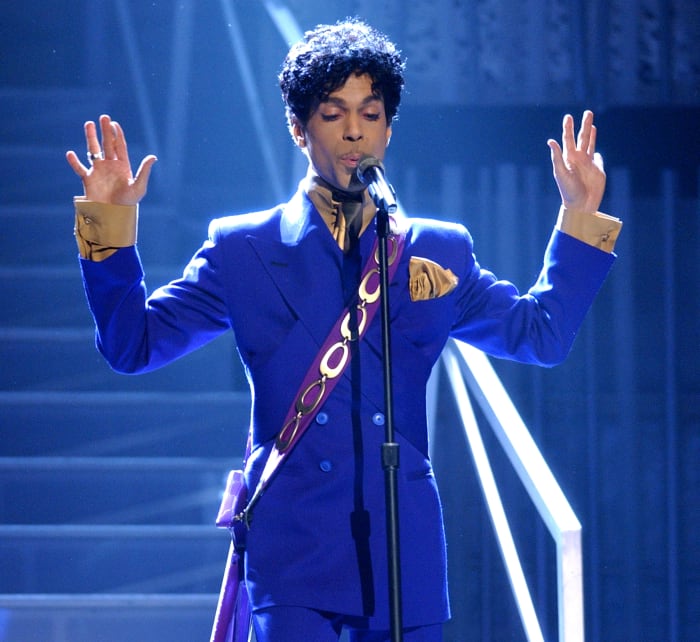 Born Prince Rogers Nelson on June 7, 1958, in Minneapolis, Minnesota, Prince would go on to become a singer, songwriter and musical icon. His parents were John Nelson, a musician whose stage name was Prince Rogers, and Mattie Shaw, a jazz singer who performed with the Prince Rogers Band.

Prince became interested in music at a young age and taught himself how to play the piano, guitar and drums. His parents broke up when he was about 10, and he and his sister split their time between their parents’ homes. In high school, Prince formed the band Grand Central (later known as Champagne) with André Anderson (who later changed his name to André Cymone) and Morris Day.

In 1978, Prince was signed to Warner Bros. Records. In a 2009 interview with Tavis Smiley, Prince revealed that when he was a child, he suffered from epileptic seizures and that he was teased in school. He told Smiley, “Early in my career I tried to compensate by being as flashy and as noisy as I could.”

With his band the Revolution, Prince went on to create the classic album Purple Rain (1984), which also served as the soundtrack to the film of the same nam. Co-starring Apollonia Kotero and Morris Day, the movie won an Academy Award for Best Original Song Score. “I Would Die 4 U”, “Take Me With You’, “Purple Rain”, “When Doves Cry and “Let’s Go Crazy” off the album were all hits, with the last two going to No. 1 in the charts. “Darling Nikki” from Purple Rain incited controversy due to its explicit visuals.

In 1985 he released Around the World in a Day, which had the Top 10 tracks “Raspberry Beret,” and “Pop Life.” The record continued to feature Prince’s penchant for playing a range of instruments and desire to impart messages of self-love, as seen with “Paisley Park,” a track inspired by the name of his Minneapolis studios.

1986 saw the release of Parade, which included his No. 1 pop/R&B single “Kiss.” Parade served as the soundtrack for the artist’s second film, Under the Cherry Moon, which he directed and starred in.

In 1978, Prince dropped his debut album, For You, which was followed by Prince (1979). He played practically all of the instruments on the albums, and the release contained “I Wanna Be Your Lover.” The critically acclaimed Dirty Mind dropped in 1980, consisting of material that was graphic in its exploration of sexuality and fantasy.

Controversy (1981) continued playing with the themes of its predecessor, as seen with the dance-oriented title track, which reached No. 3 on the R&B charts, as well as songs like “Sexuality” and “Do Me Baby.”

Prince found international success with the release of his 1982 album, 1999, which included the Top 20 title track, an exquisite synth-funk ode about nuclear doomsday, as well as the Top 10 hits “Little Red Corvette” and “Delirious.”

After the disbanding of the Revolution, Prince gave the world the double album Sign ‘O’ the Times (1987), with the title track reaching No. 3 on the pop charts and No. 1 in R&B. The album was known for its stark commentary on social issues yet also contained fun jams like “U Got the Look,” a duet with Scottish singer Sheena Easton that reached No. 2 on the pop charts. Sign was easily among Prince’s most critically acclaimed albums, yet its sales lagged in the U.S., finding more of an audience in Europe, where the artist launched a successful tour.

Without slowing down in any way, Prince released Lovesexy in 1988, known for its album cover featuring a photo of the artist in the nude as well as the Top 5 uptempo R&B hit “Alphabet St.” He followed up with his 11th studio album, the soundtrack to Batman, in 1989, by which time Prince had become one of America’s most commercially successful pop artists.

The early 1990s marked the launch of the New Power Generation (NPG), Prince’s latest band that featured the vocals of Rosie Gaines. Prince and the NPG’s first album release was the soundtrack to Graffiti Bridge, a 1990 sequel to Purple Rain that didn’t fare well at the box office yet still yielded the Top 10 track “Thieves in the Temple.”

NPG’s and Prince found success with his album Diamonds and Pearls (1991), which rose to No. 3 on the Billboard 200 album chart. Diamonds yielded chart success for its beautiful title track, the incomparable “Gett Off,” “Insatiable” and the No. 1 single “Cream.”

In the fall of 1992 Prince had signed a record $100 million dollar deal with Warner Bros., which was considered “the largest recording and music publishing contract in history” at the time and allowed him the freedom to pursue TV, film, book and merchandising deals separately.

In the mid-’80s, Chaka Khan released a highly successful cover of his 1979 tune “I Feel For You,” while Sinead O’Connor’s biggest hit was Prince’s “Nothing Compares 2 U.” The Art of Noise and Tom Jones reached the U.K. Top 5 in 1988 with a remake of “Kiss,” and Alicia Keys covered “How Come U Don’t Call Me Anymore” on her own 2001 debut.

Prince also worked on specific album tracks for performers like Khan, Madonna, Tevin Campbell, Kate Bush, the Time, Martika, Patti Labelle and Janelle Monae. He was behind the girl group Vanity 6, led by singer/actress Vanity, and their No. 1 dance hit “Nasty Girl.” And he provided all-woman band the Bangles with a No. 2 hit with “Manic Monday.”

In 1992 Prince and the NPG released Love Symbol Album. Though embraced by some critics, sales did not fare as well as Diamonds. Love only managed to have one Top 10 hit, the transcendent single “7,” though “My Name Is Prince” and “Sexy MF” did well on the underground scene. The following year Prince released the compilation box set The Hits/The B-Sides, which had an array of popular songs as well as the newly released “Pink Cashmere”.

After Love Symbol Album there was tension between Prince and his record label Warner Bros. Turned off by feeling controlled by his label, Prince changed his name to the unpronounceable glyph O(+> in 1993, a fusion of female and male astrological symbols which he used until 2000.

During that time, he was often referred to as “the artist formerly known as Prince”. He also started making appearances with the word “SLAVE” drawn on the side of his face to convey the disdain he had for his label. Prince did release the 1995 album The Gold Experience during this time of duress, and scored another Top 5 song with “The Most Beautiful Girl in the World.”

Once he was released from all contractual obligations to Warner Bros., Prince released the triple album  Emancipation (1996), which went on to become certified platinum and featured the soul remake “Betcha by Golly, Wow.” Several other albums affiliated with his own NPG label soon followed, including Crystal Ball (1998) and Rave Un2 the Joy Fantastic (1999).

In 2004, Prince performed at the Grammy Awards with Beyoncé Knowles, the same year he was inducted into the Rock and Roll Hall of Fame. That spring, he released Musicology with a tour that became the top concert draw in the United States. The album won two Grammys and added another hit to his sizeable list of hits, “Call My Name”.

His next album, 3121, was released in 2006. That year, he wrote and performed “Song of the Heart” for the animated film Happy Feet, and won a Golden Globe (Best Original Song) for the composition. In 2007 he performed during the Super Bowl XLI halftime show on a massive stage shaped as his famous symbol amid pouring rain, watched by 140 million fans.

In 2010, Billboard.com voted him as the greatest Super Bowl performer ever, he was also featured in TIME magazine’s “100 Most Influential People in the World” and earned a Lifetime Achievement Award from the BET Awards, ending the year with an induction into the Grammy Hall of Fame.

Prince was against the trend of having songs shared at will on the web. He did not support providing his songs to online music platforms without proper upfront compensation and profit-sharing, with his tracks eventually only found on the Jay-Z backed streaming service Tidal. One of the few pop artists to have full ownership of his masters, he was diligent via Web Sheriff in erasing examples of his music, including videos and live performances, from the internet. He was also behind the Lenz v. Universal Musical Group case, which unsuccessfully pushed for the YouTube removal of a baby dancing to “Let’s Go Crazy.”

On May 2, 2015, Prince staged a Dance Rally 4 Peace at Paisley Park to pay tribute to Freddie Gray, who died in police custody after his arrest in Baltimore, and to show support for the activists protesting his death. With his backup band 3RDEYEGIRL, Prince performed a 41-minute concert including his protest song “Baltimore,” which was inspired by Gray’s death.

On April 21, 2016, Prince was found dead at his Paisley Park compound in Minnesota. The week prior, his plane made an emergency landing and the singer was hospitalized for what was reported as a severe case of the flu, though reports later stated that the musician was actually given a life-saving “safe shot” for a Percocet overdose. The Carver County sheriff’s department and Midwest Medical Examiner’s office launched an investigation into the cause of death. After the autopsy was performed, his remains were cremated and his close family and friends gathered for a small, private funeral on April 23.

Almost two weeks after the musician’s death, a lawyer revealed that Dr. Howard Kornfeld, a California-based physician who specializes in treatment for those dependent upon and addicted to pain medication, had been called upon by Prince’s team to aid the musician. (The performer had undergone hip surgery some years earlier, and was believed to have endured recurring discomfort while giving concerts.) Kornfeld’s son had reportedly flown to Prince’s compound to initiate the recovery process and was among those who found him dead. While Prince’s state of health at the time of his death is unknown, attorney William Mauzy said the artist “was dealing with a grave medical emergency” when Kornfeld was called, as reported by The Minneapolis Star Tribune.

On June 2, 2016, the Midwest Medical Examiner’s office released the results of its investigation, which determined that Prince died from an accidental overdose of “self-administered” fentanyl, which is a synthetic opiate.

His Minnesota home/studio, Paisley Park, officially opened its doors as a museum in October 2016. The following month, his first posthumous song, “Moonbeam Levels,” was released. Additionally, production began on a documentary about the singer’s early years, entitled Prince: R U Listening?

On April 19, 2018, Carver County concluded its two-year investigation with the announcement that no criminal charges would be filed in Prince’s death. Attorney Mark Metz said that it was unknown who supplied the musician with the fentanyl-laced pills that killed him, and that there was no evidence that any associates knew he was ingesting such a dangerous substance.