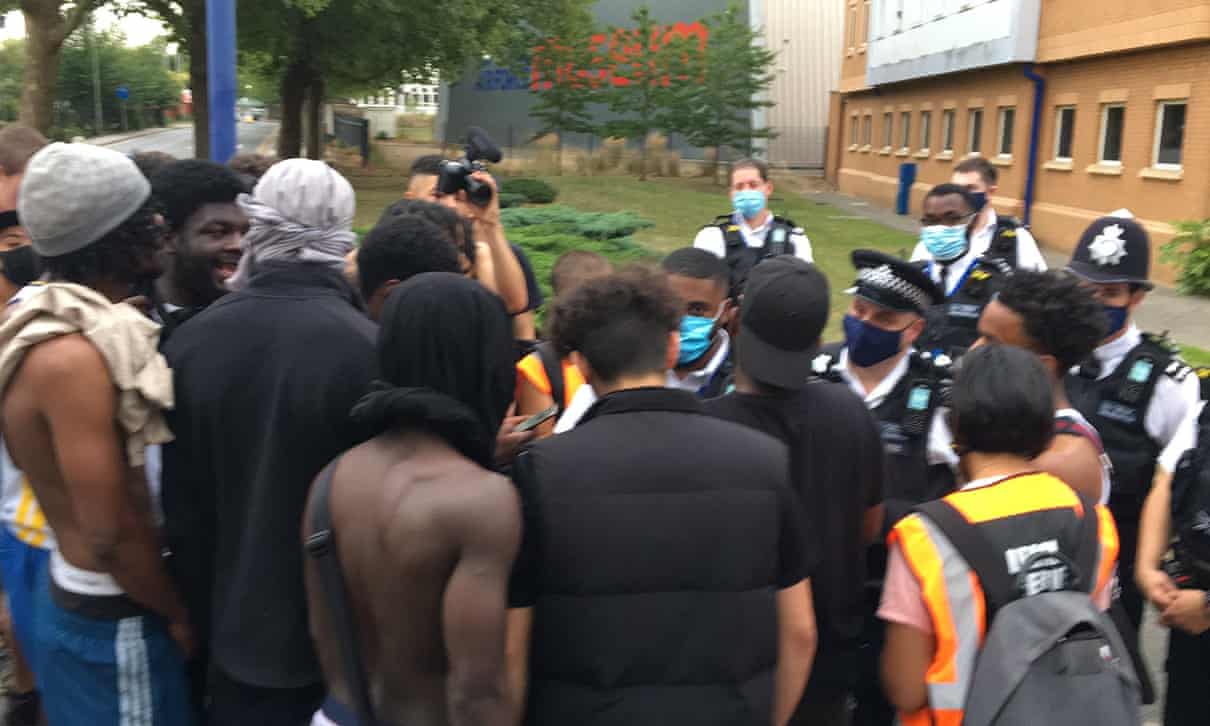 Young people have blockaded a police station in north-west London, accusing police of assaulting and arresting youth workers who had gone to investigate the arrest of a 14-year-old.

Several dozen people had gathered to block the car park entrance on Friday evening, while police in riot gear stood behind the gate. They were demanding the release of two youth workers, the 14-year-old, and another teenager.

Barnet police said they had made a section 35 dispersal order. Arrests under the order were not being made while the Guardian was present.

Temi Mwale, director of the 4Front Project, which works with young people on the Grahame Park estate, used a PA sound system to berate officers inside the station. “We tried to de-escalate the situation, I actually think it was going well,” she said. “But at some point, someone … decided it would be appropriate to send four, five huge vans full of hundreds of you, to start dragging community workers across the floor.”

Mwale told the Guardian that the incident had begun when young people from the estate had come to the 4Front Project’s offices to tell her colleagues that a 14-year-old was being arrested.

She and colleagues had challenged officers, who told them they had smelled cannabis on the boy and found drugs nearby. Onlookers were not satisfied with the their responses given and sat down in the road to block their vehicle from leaving the area.

“Here we have enormous issues with strip searches,” Mwale said. “We have had young people with their trousers down on the main road … this is why we said we don’t really trust what you are doing today.” She alleged that the boy who had been arrested had previously been the victim of an illegal search, in which police officers had put their hands in his underpants.

Mwale said she tried to de-escalate the situation, but many more officers arrived. “They started grabbing people, dragging them across the floor. One person had 10 or 15 officers around him, they were pinning him down with their knee on his neck.”

4Front Project workers were among those attacked by police, Mwale said. “The young people have got trust in these workers, they have been with them in the police station as appropriate adults,” she said. “From that point the young people were saying: no, you are not taking them.”

The Guardian saw videos of police violently restraining at least one individual. The arrival of police in such large numbers was seen as a provocation on an estate where the community say they are the victim of excessive policing, which has intensified during the coronavirus lockdown. The incident came the day before a demonstration in nearby Tottenham against “the over-policing of black communities”.

Members of the community followed officers back to Colindale police station. They remained there late on Friday evening. A late tweet from police in Barnet said that the 14-year-old had been released.

Earlier Jack, 17, a volunteer with 4Front who preferred not to give his surname, had said that protesters would remain outside the police station until those arrested were released. “They took two pillars of the community,” he said. “They are very important members of the community … I’ve got no family so if I’m arrested that’s who comes to the police station to help me.”

The Metropolitan police confirmed that officers had carried out a section 23 stop and search at 2.40pm on Friday under the Misuse of Drugs Act.

A spokesperson said: “A 14-year-old male was arrested on suspicion of possession of cannabis.

“As officers carried out the arrest a group began to gather around officers and obstructed the police vehicle from leaving the scene. Further police units attended. A further two people, a 23-year-old man and a 25-year-old man were arrested on suspicion of obstruction of a constable.

“The police vehicle left the scene and the group followed on foot to Colindale police station and approximately group of approximately 30-40 people remained outside the station.

“A cordon is in place around the police station and a section 35 dispersal order was authorised and further officers are supporting to dispersal of the group. A 19-year-old-man was arrested on suspicion of assaulting [a] police officer.

“A number of officers received minor injuries but did not require treatment. All of those arrested remain in police custody. We have not received any reports that members of the public or those under arrest sustained any injuries.”