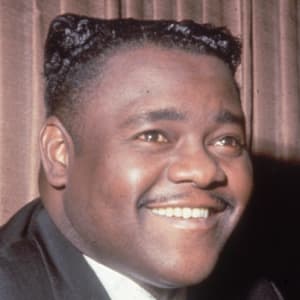 Legendary musician Antoine “Fats” Domino Jr. was born on February 26, 1928, in New Orleans, Louisiana. The youngest of eight children in a musical family, he spoke Creole French before learning English. When Domino was 7, his brother-in-law Harrison Verret taught him to play the piano and introduced him to the vibrant New Orleans music scene; by age 10, the talented boy was already performing as a singer and pianist.

At 14, Domino dropped out of high school to pursue his musical dreams, taking on odd jobs like factory work and hauling ice to make ends meet. He was inspired by the likes of boogie-woogie piano players like Meade Lux Lewis and singers like Louis Jordan. In 1946, Domino started playing piano for the well-known New Orleans bass player and band leader Billy Diamond, who gave Domino the nickname “Fats.” Domino’s rare musical talents quickly made him a sensation, and by 1949 he was drawing substantial crowds on his own.

“I knew Fats from hanging out at a grocery store. He reminded me of Fats Waller and Fats Pichon. Those guys were big names and Antoine—that’s what everybody called him then—had just got married and gained weight. I started calling him ‘Fats’ and it stuck.” – Billy Diamond

In 1949, Fats Domino met collaborator Dave Bartholomew and signed to Imperial Records, where he would stay until 1963. Domino’s first release was “The Fat Man” (1949), based on his nickname, a song co-written with Bartholomew. It became the first rock ‘n’ roll record to sell 1 million copies, peaking at No. 2 on the R&B charts. The two continued to churn out R&B hits and Top 100 records for years, with Domino’s distinctive style of piano playing, accompanied by simple saxophone riffs, drum afterbeats and his mellow baritone voice, making him stand out in the sea of 1950s R&B singers.

Fats Domino found mainstream success in 1955 with his song “Ain’t It a Shame,” covered by Pat Boone as “Ain’t That a Shame”; Boone’s version hit No. 1 on the pop charts, while Domino’s original reached No. 10. The hit record increased Domino’s visibility and record sales, and he soon re-recorded it under the revised name, which remains the popular title/version today.

In 1956, Domino had five Top 40 hits, including “My Blue Heaven” and his cover of Glenn Miller’s “Blueberry Hill,” which hit No. 2 on the pop charts, Domino’s top charting record ever. He cemented this popularity with appearances in two 1956 films, Shake, Rattle & Rockand The Girl Can’t Help It, and his hit “The Big Beat” was featured on Dick Clark’s television show American Bandstand in 1957.

When touring the country in the 1950s, Domino and his band were often denied lodging and had to utilize segregated facilities, at times driving miles away from the venue. Still, Domino continued to ride high on his success through the end of the decade, churning out more rocking hits like “Whole Lotta Loving” (1958), “I’m Ready” (1959) and “I Want to Walk You Home” (1959).

“There wouldn’t have been a Beatles without Fats Domino.” – John Lennon

Domino continued to tour for the next two decades, but after a health scare experienced during tour dates in Europe in 1995, he rarely left New Orleans. A quiet and private man, he occasionally performed at local concerts and at the famed New Orleans Jazz and Heritage Festival from time to time, but generally shunned publicity of all kinds.

Domino was inducted into the Rock and Roll Hall of Fame in 1986, but refused to attend the ceremony; likewise, he turned down an invitation to perform at the White House, though he accepted the National Medal of Arts from President Bill Clinton in 1998.

Four songs of Domino’s have been named to the Grammy Hall of Fame for their significance in music history: “Blueberry Hill” in 1987, “Ain’t It A Shame” in 2002, “Walking to New Orleans” in 2011 and “The Fat Man” in 2016. Domino was also presented with a Grammy Lifetime Achievement Award in 1987.

Despite being urged to leave New Orleans prior to Hurricane Katrina striking the city in 2005, Domino preferred to stay home with his wife, Rosemary, who was in poor health at the time. When the hurricane hit, Domino’s Lower Ninth Ward home was badly flooded and the legendary musician lost virtually all of his possessions. Many feared that he was dead, but the Coast Guard rescued Domino and his family on September 1. Domino quickly put the rumors of his demise to rest, releasing the album Alive and Kickin’ in 2006. A portion of the record sales went to New Orleans’ Tipitina’s Foundation, which helps local musicians in need.

After Katrina, Fats Domino made a few public appearances around his home city of New Orleans. Footage from a 2007 concert was captured for a documentary, Fats Domino: Walkin’ Back to New Orleans, which aired the following year. A greatest hits album was also released around that time, allowing a whole new generation to fall for Fats Domino all over again.

In later years, Domino largely stayed out of the spotlight. His beloved wife died in 2008. A documentary about his life, Fats Domino and the Birth of Rock ‘n’ Roll, premiered on PBS in 2016.

The rock ‘n’ roll legend died of natural causes on October 24, 2017, at the age of 89, according to the Associated Press. He will be remembered as one of rock’s earliest and most enduring stars, who helped break down color barriers in the music industry.