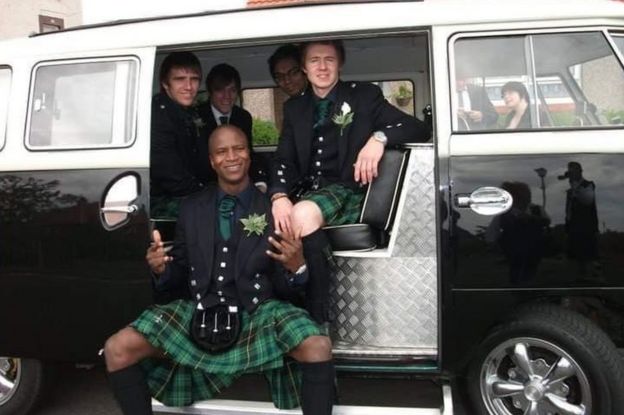 The town of Kirkcaldy in Fife lies on Scotland’s east coast. It has a population of some 60,000, and like much of Scotland’s industrial heartlands has suffered economic decline in recent decades. One in five families there live in poverty.

It is far from ethnically diverse. The 2011 census showed more than 97% of the town’s residents were white and just 1% black.

Just 1% of Police Scotland’s officers and staff identify as being from an ethnic minority background, compared with 4% of Scotland’s population as a whole.

Sheku Bayoh, who was aged 31 when he died, was a trainee gas engineer. Born in Sierra Leone, he came to live in the UK as a teenager and became a father to two children. His sister, Kadi Johnson, describes him as a “much-loved father and family man, and a well-liked member of his community”.

On the 3 May 2015, Sheku went to watch an MMA fight at a friend’s house, where he took MDMA and flakka, a synthetic stimulant. According to his family, the drugs made him act erratically.

Later that day, Sheku’s neighbours saw him walking around his home in Kirkcaldy, Scotland with a knife, and called the police. By the time the police arrived, he was unarmed but Sheku was arrested by police in any event. Nine officers attended the call and to arrest Sheku. They used CS gas, batons and force sufficient to cause the 23 serious injuries that the coroner would later record, on his broken body.

Within an hour-and-a-half, of the police arrest, Sheku was dead. The police said they used aggressive restraining techniques because he was acting “like a zombie”, but CCTV footage showed many of their claims of how events occurred did not ring true. According to the official version, Sheku was only pinned to the ground for 30 seconds, but an eyewitness said nine officers laid across him for minutes. “I heard him screaming. It sent chills through me. I heard the man shout to get the police off him. They never moved,” the bystander said.

Kadi, Sheku’s sister, recalls that she was at home when the police knocked at the door to inform her of her brother’s passing.

“I had just seen him the night before at a family party for my daughter’s birthday. He was well, he was fine. I was shocked. But the officers wouldn’t tell me anything about what happened.

“At first they told me he’d been found on the ground. Then they said they were looking for two men. Eventually, after talking to their boss, they told me there had been a forceful arrest, and he’d died on the way to hospital. We just couldn’t get a straight answer out of them.”

Within hours, the Scottish Police Federation, the organisation which represents rank and file police officers of Scotland’s national police force, was also talking to the media.

The federation’s lawyer told them that “…a petite female police officer was … subjected to a violent and unprovoked attack by a very large man who punched, kicked and stamped on her [and that she] believed she was about to be murdered.”

Reports followed in the press describing Sheku as a “dangerous man, armed with a large knife, crazed on drugs”, leaving officers fearing for their lives.

The reports stressed his supposed size, while the small stature of the female officer was also emphasised.

In 2018, Scottish prosecutors decided not to charge any of the officers involved, following an investigation.

Following the decision not to prosecute any of the officers involved in the death of Sheku Bayoh, BBC Scotland’s Disclosure programme started investigating. They obtained documents and video evidence at the heart of the case.

The BBC then asked a leading authority on police restraint and use of force, Eric Baskind, of Liverpool John Moores University, to analyse the material.

In the 2018 film,  Sheku Bayoh: Dead in police custody, Mr Baskind said: “What strikes me from the evidence of the officers is that they approach the scene with the intention of using force.

“He [Sheku] is not running away, he’s not, at that moment in time, creating a danger to anyone. They get there, they screech to a halt, they get out of the cars with irritant sprays and batons.

“Those actions were very escalatory. And once you ramp things up to a certain degree it is very difficult, if not impossible, to backtrack.”

Mr Baskind said this could have been prevented, if the officers had approached the situation differently, in line with their training.

“What we can’t rule out is that Mr Bayoh is going through a mental health crisis, and from his perspective, he might have seen the discharge of the irritant sprays, the baton attacks, as him being attacked.

“Had they approached Mr Bayoh in a different way, in a calming way, to try and find out what was wrong, then in my view, that attack may have been prevented.”

Using the police officers’ own testimony, as well as eyewitness accounts and CCTV, they were able to piece together the events of that morning.

The revelations in the film, broadcast in December 2018, cast new light on the accounts given by the officers.

Some had said they were in fear of their life from Sheku. The officers’ own statements revealed Sheku no longer had the knife, although some said they feared he may have concealed it. The knife was found later, in a nearby garden.

The documents also revealed that within 30 seconds of encountering Sheku, three officers discharged their irritant spray into his face, and batons were used, even though Sheku had not been violent towards them.

Following a high profile campaign led by Kadi, the Scottish government launched a public inquiry into the case in January of 2020, over five years after Sheku’s death. The results will come out in the next few months. “Sheku Bayoh was under the influence of drugs but he did not deserve to die,” explained the family’s lawyer, Aamer Anwar.