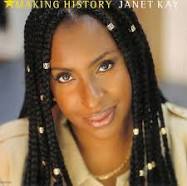 Janet Kay, was born Janet Kay Bogle (the first of 6 children) in London to Jamaican parents. Janet is a descendant of the Jamaican National Hero the Rt Excellent Deacon Paul Bogle.

As a sixties child, Janet was exposed to the singing greats, especially those from the Tamla Motown stable and as a result of the exposure and inspiration, Janet’s love for singing was born.

In 1977, whilst in Secretarial College, Janet was invited by her school friend Sonia Ferguson (who recorded a cover version of Smokey Robinson’s ‘Oh Baby Baby’ in the late 70’s) to a band rehearsal. Destiny saw to it that band member Tony Gad heard Janet singing in the rehearsal room. He was so impressed with the sweetness of Janet’s voice that he introduced her to the reggae legend, the Late Great Alton Ellis.

That meeting resulted in Janet recording a cover version of Minnie Ripperton’s ‘Loving You’ (produced by Alton Ellis), which became a reggae smash hit spending many weeks at No. 1 in the reggae charts.

The following year, 1978, saw Janet record 2 more cover versions, ‘I Do Love You’ and ‘That’s What Friends Are For’, again, both spending weeks at No. 1 in the reggae charts.

In 1979, Janet made history by becoming the ‘First British born Black Female Reggae Artist to have a No. 1 in the British Pop Charts’ – Music Guinness Book of Records. The song ‘Silly Games’, (produced by Dennis Bovell) was a hit not only in the UK but also in Europe.

Janet’s songwriting prowess became evident on the release of her first album ‘Capricorn Woman’. The album was, and still is a best seller. All the songs except 2 were penned by Janet Kay.

By now, Janet had become known as the ‘Queen of Lover’s Rock’. In that same year Janet was presented with the awards for Best 7″ Vinyl Single, Best 12″ Vinyl Single and Best Female Vocalist 1979 by Black Echoes Music Newspaper.

Janet’s voice was not exclusive to only reggae music and in the early 80’s she also penned and sung the soulful ‘Eternally Grateful’ which became an underground hit.

The early 80’s also saw the collaboration between Janet and reggae legend the Late Jackie Mitto with the Randy Crawford classic, ‘You Bring The Sun Out’.

In 1980, after a chance meeting with actor/singer Victor Romero Evans, Janet was introduced to the theatre company ‘Black Theatre Co-operative’. A successful audition saw the birth of Janet’s theatrical career, in the play ‘Mama Dragon’ by Faroukh Dhondy’s which toured England and Europe.

Janet has since appeared in several films and has also made numerous TV appearances, theatre plays, (touring the UK and Europe) and radio plays.

In 1981, Janet also starred in the ‘Black Theatre Co-operative’s’ TV sitcom ‘No Problem’ (LWT/Channel 4), the first black TV show which was created and conceived by a black theatre company. The show became a cult classic.

In 1990 Janet collaborated with Beats International (Norman Cook aka Fat Boy Slim) on their track Burundi Blues. Following this collaboration, Janet was invited to feature on Lindy Layton’s version of Silly Games.

In the early 90’s Janet, along with fellow actresses Judith Jacob, Suzanne Packer, Suzette Llewellyn, Beverley Michaels, Josephine Melville and the Late Joanne Campbell formed the highly successful female theatre company the Bibi Crew. All the shows were written produced and directed by the Crew.

In 1991, the album ‘Sweet Surrender’ was renamed ‘Lovin’ You, Best of Janet Kay’, (which included a newly recorded version of ‘Lovin’ You’), and was released in Japan. The track ‘Lovin’ You’ propelled Janet to stardom in Japan. Janet subsequently signed to Sony Music (Japan) from 1993 – 2003.

Janet has visited Japan at least once a year every year since 1990.

In recent years Janet has visited Japan, performing at the exclusive Blue Note Night Club for 2 to 3 weeks at a time in Fukuoka, Osaka, Yokohama, Nagoya and Tokyo.

In 2006/7 Janet returned to theatre, where she appeared as the Fairy Godmother in Hackney Empire’s Pantomime, ‘Cinderella’, which the Evening Standard rated the best ‘Panto of the season’.

Janet works from time to time as a vocal coach for WAC a Performing Arts & Media College provides training in the arts for children and young people up to the age of twenty-five.

Janet’s creativity is not exclusive to singing and drama, but extends to the dexterous world of Arts and Crafts where she is an accomplished Machine Knitter/Hand Knitter/Designer and Lacemaker and her works have been published in craft editorials. Janet has also embraced the digital revolution, becoming highly skilled in web and graphic design (enabling her to build her own website as well as others), music technology (enabling her to record her own vocals on her last album), as well as 3D logo animation and video editing. Janet has co-edited a short feature film by Clive Gandison (‘Evergreen Man’), starring Victor Romero Evans, which was nominated for an award by the BFM.

Janet has been voted one of Britain’s Top 100 Black Britains by the Evening Standard and she has also been presented with many awards over the years including, Silver Disc for Silly Games, Best Female Singer, Best 7″ Vinyl Single and Best 12″ Vinyl Single (1979), Memorial Disc in Commemoration of 1 Platinum and 2 Gold albums in Japan, presented by Sony Music Japan (1994), Women of Merit by Darker than Blue in Association with Barclays(2002), Contribution to British Black Music Industry (2001) and Outstanding Contribution to British Reggae(2009) to name but a few…

Janet performs along side Carroll Thompson and Victor Romero Evans in their self promoted show, the ‘Lovers Rock Monologues‘ (written by Victor Romero Evans) which they have been touring the UK successfully for 4 years and also Janet promotes, presents and performs with Carroll & Victor in their annual Valentines Live Concert at the Clapham Grand.

Janet performs live at venues throughout the UK and World including annual performances at the World famous Jazz Cafe, Under The Bridge, 02 Indigo and Billboard Live in Japan, to name but a few.

This year, 2019, Janet is celebrating the 40th Anniversary of the release of ‘Silly Games’ her iconic hit track. Janet continues to perform at Live Shows and Festivals throughout the World.

Janet’s sweet, heart warming vocals has and continues to win her many friends and fans around the world. Her songs, ‘Silly Games’ and ‘Lovin’ You’, reaching anthemic heights, on this side and the other side of the globe.

Memorial Disc in Commemoration of 1 Platinum and 2 Gold albums in Japan, presented by Sony Music Japan(1994)

Men & Women of Merit, in association with Barclays, Award for Outstanding Contribution to Black Music (2002)

In recognition of 4 decades of hard work and service to the British Black Music sector, in particular for popularising Lovers Rock globally and putting Brent on the musical map. Presented by BritishBlackMusic.com/Black Music Congress (2017)