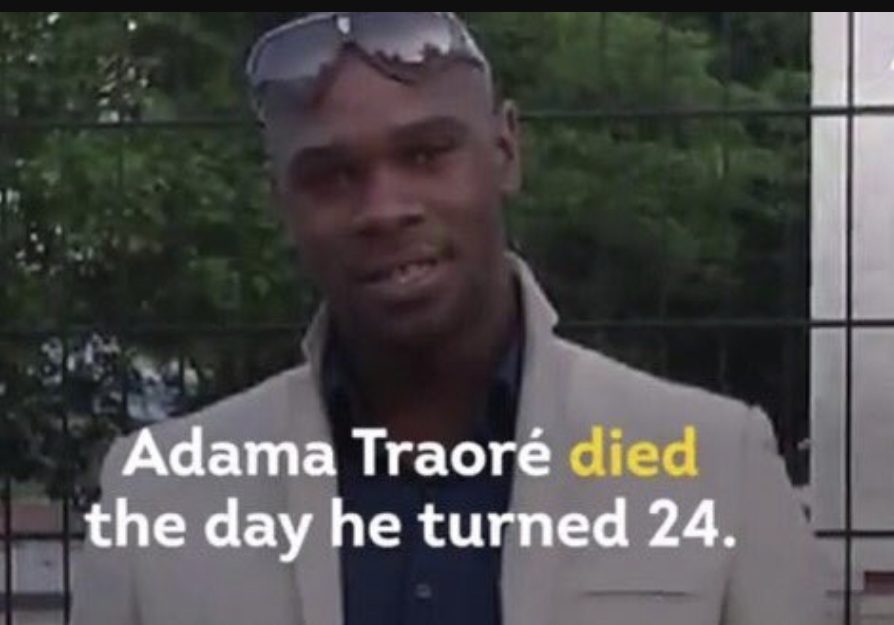 In Beaumont-sur-Oise, a small town just north of Paris, France it was 19 July 2016 and Adama Traoré’s 24th birthday. As he and his brother Bagui, walked together planning where they would go that evening to celebrate, they were stopped by police. The police were looking for Bagui as a suspect in an extortion case.

Adama began to run, knowing that he didn’t have any ID on him. Caught by the police, he managed again to escape and fled to a friend’s house. There were no witnesses present when the three police officers apprehended him for the last time.

According to the police, Adama had trouble breathing and felt faint while being taken to the station. He later died at the precinct. When the paramedics arrived, he was handcuffed and lying face down on the floor without a pulse. When his mum came looking for him at the station, she was lied to and told he was at the hospital, when in fact he’d already passed away.

On arrival at the police station, his mother, Mrs Traore and Adama’s younger brother Yacouba, had been given conflicting stories. One officer told her that he was in hospital, another said that he was fine and promised to give him the sandwiches that she had prepared for him. Eventually she was told that visiting hours were over and that she had to return the next day.The family was only informed of his death hours later, in an exceptionally insensitive way.

Adama’s mother had stood outside the police station with Yacouba, crying in the dark, after being told that visiting hours were over.

It was 10pm and no one had heard from Adama in over five hours.

They watched the flashing lights of police cars drive past them in and out of the station until Yacouba had had enough and put his foot out to hold open the gate.

Yacouba lashed out and had to be restrained. He and his mother were teargassed by the police. Mrs Traoré was told that her son had died of a heart attack and a serious blood infection. They said that he had been drinking and smoking cannabis. “The doctor came and sat next to me and said: ‘Madame, you can’t see your son. He has bled from his nose and mouth, it’s not something you need to see.’”

The next day, as the media started relaying the official version of the story – that a young man had died of a heart attack in police custody – Traoré’s family and friends staged a peaceful protest outside the police station where he had been taken. They didn’t believe that he had died of a heart attack and were looking for answers. Police used teargas to disperse them.

The family’s suspicions grew when the authorities told them: “As you’re Muslim, and we know you like to bury your bodies quickly, we’ve taken the liberty of phoning Roissy [airport] and Air France and the body can be repatriated to Mali tomorrow.” They even offered to arrange passports for any family members who didn’t have them, relatives said. But they weren’t leaving: Adama was not known to have been ill and they wanted a second autopsy.

The authorities again insisted on trying to deliver the body to the family, but the family knew if they accepted it, they wouldn’t be allowed another autopsy.

“When the body arrived, in a gesture that felt really violent for us, we refused it,” Traoré’s older sister, Assa, told the Guardian.

The second autopsy revealed Traoré had died of asphyxiation. Toxicology reports for cannabis and alcohol came back negative. The family insisted that someone, somewhere, had lied about what happened that night.

A senior firefighter later told the gendarmerie inquiry that when he arrived to resuscitate Traoré, he found he had not been placed in the recovery position but was lying face-down on the ground in handcuffs, with no one helping him – a statement that contradicted the gendarmes’ accounts. One of the gendarmes said Traoré had told the police he couldn’t breathe, but officers told the firefighter they thought he was faking it. The gendarmes at first refused to un-cuff him saying that he was violent.

In the past four years, three police autopsies and three counter-autopsies commissioned by Adama’s family were performed, each finding Adama suffocated. The police version blames his suffocation on a pre-existing heart condition combined with his weed consumption. The latest family counter-autopsy blames his death on the police use of a “prone restraint”, a technique – where someone is pinned to the ground – that can cause suffocation. The officers were exonerated in 2018, before the investigation was reopened in 2019 and a judge absolved them again in March of this year. On the 5th of June, the case was reopened to hear from two new witnesses – a woman who saw Adama’s first arrest and the friend he took shelter with before being caught the second time.

The fight for justice for Adama continues and you can help by getting in touch with La Vérité pour Adama and contribute to the campaign.