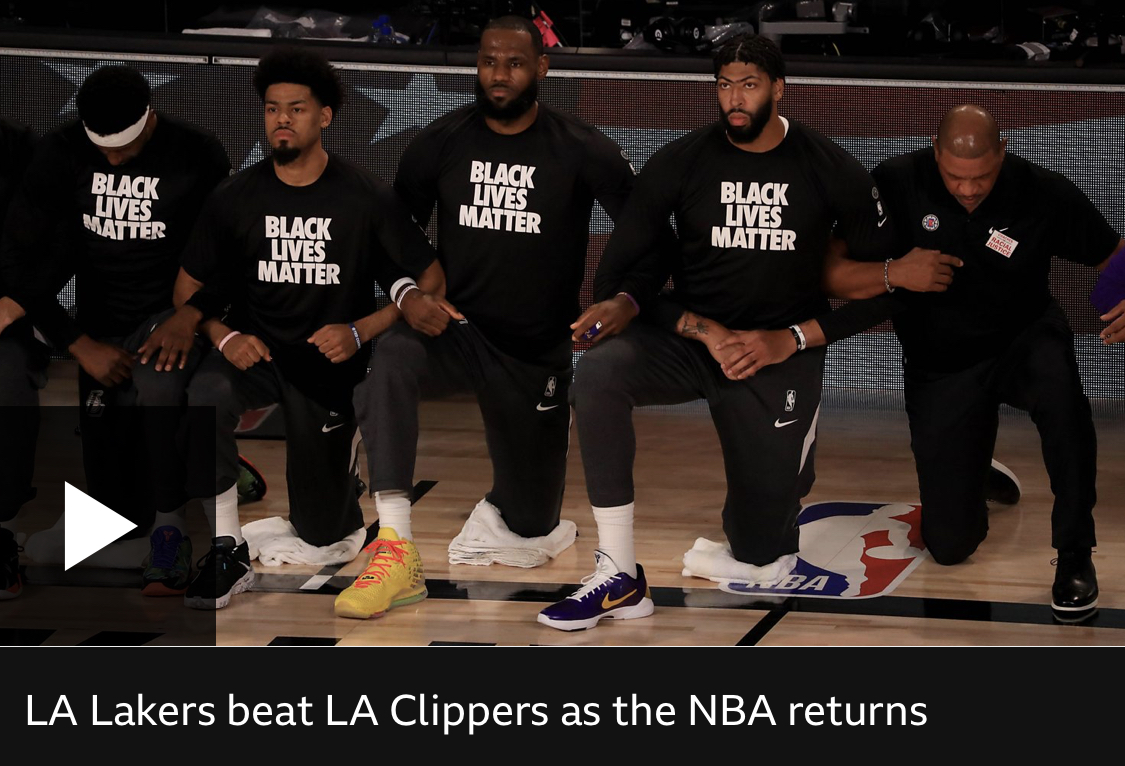 Los Angeles Lakers star LeBron James called for players to “keep our foot on the gas” in the push for racial justice as the NBA season resumed in Orlando.

The staff of the Lakers, the Los Angeles Clippers, the Utah Jazz and the New Orleans Pelicans – the four teams in action on Thursday night – all knelt during the pre-match anthem.

“In the past when we’ve seen progress, we’ve let our foot of the gas a little bit. We can’t do that,” said James.

“We want to keep our foot on the gas.”

Before the anthems, television coverage of the matches broadcast an introductory segment – narrated by rapper Meek Mill – that promoted social justice initiatives and the campaign for societal change sparked by viral video of the death of George Floyd while in police custody in Minneapolis in May.

Instead of displaying their names on the back of their jerseys, several players wore a slogan from a list approved by the league organisers, including “Black Lives Matter,” “Say Their Names” and “I Can’t Breathe.”

James, 35, who kept his own name on his jersey as none of the slogans “seriously resonated” with his goals, said that basketball has the power to make a change globally.

“The game of basketball has always been bigger than just the ball and the rim and 10 guys on the floor,” he told TNT.

“It’s an opportunity to use this platform to be able to spread a lot of positive, a lot of love, throughout the whole world.”

New Orleans Pelicans’ meeting with the Utah Jazz was the first NBA match in more than four months after the league had been suspended because of the coronavirus pandemic.

The 22 teams with a chance of making the post-season play-offs have assembled in a bio-secure ‘bubble’ at Walt Disney World, Orlando to play out the remainder of the season at the resort’s elite-level basketball facilities.

All matches are taking place without fans and even the opening-night anthems, performed by jazz star Jon Batiste and Compton Kidz Club respectively, were performed virtually and displayed via video link.

The headline match-up of the evening, which pitted James against Clippers stars Kawhi Leonard and Paul George, lived up to billing with the Lakers shading a see-saw contest 103-101.

Earlier the Jazz, who are fourth in the Western Conference, came on strong in the final quarter to defeat the New Orleans Pelicans 106-104.