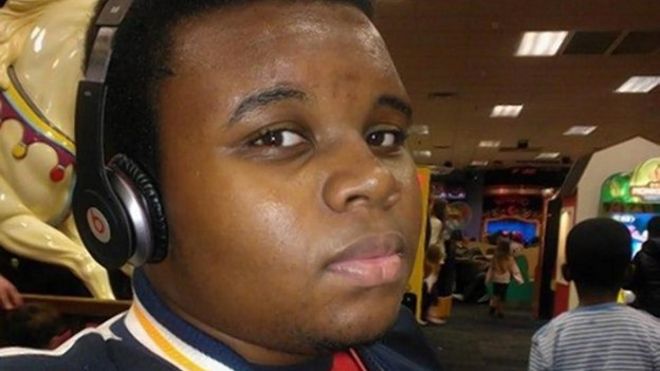 Prosecutors in the US city of St Louis have said they will not bring charges against a former police officer who shot dead a black teenager in 2014.

The killing of Michael Brown in Ferguson triggered weeks of protests.

It also led to the founding of the Black Lives Matter movement.

Prosecutors said a five-month re-examination of the case had not found enough evidence to bring charges of murder or manslaughter against the former officer, Darren Wilson.

In 2015 the Justice Department concluded that he had fired in self-defence.

Why was Michael Brown killed?

The exact details of what happened that day remain disputed by police, eyewitnesses and family members.

What is known for certain is that around midday on 9 August 2014, Mr Wilson was driving a police car and encountered Mr Brown and a friend walking down a street.

Minutes later 18-year-old Mr Brown was dead, suffering at least seven gunshot wounds, according to county prosecutor Bob McCulloch. His body lay in the street for four hours before it was removed.

Mr Wilson fired a total of 12 bullets, though investigators were unclear exactly how many of the 12 struck Mr Brown. One injury may have been a re-entry wound.

Witnesses said Mr Brown had his hands up when he was shot, but investigators said the evidence suggested this was not the case.

Nationwide protests were sparked by the killing and the decision not to charge the officer with murder. Two police officers were shot as riots ripped through Ferguson.

The findings after a re-examination of the case found, once again, that Mr Wilson should not be charged.

“Can we prove beyond a reasonable doubt that a crime occurred?” new prosecutor, Wesley Bell, told a press conference. “The answer to that is no.”

However, Mr Bell said the investigation could not exonerate the officer, who stepped down soon after the killing.

“There are so many points at which Darren Wilson could have handled the situation differently, and if he had, Michael Brown might still be alive,” he said.

The announcement comes as protests continue against racism and police brutality following the death of George Floyd, an unarmed black man, in Minneapolis, Minnesota, in May.