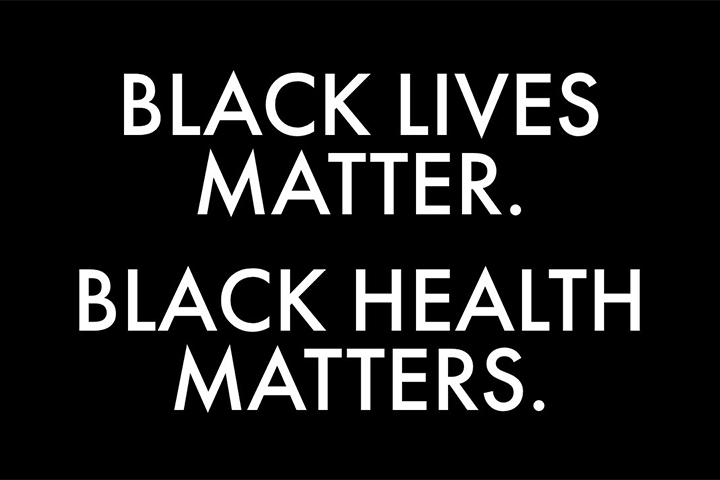 — We can’t be silent bystanders

As Derek Chauvin pressed his knee against George Floyd’s neck, you could hear the sounds and the pain of three simple words: “I can’t breathe.” Three other police officers watched this encounter for at least 8 minutes with no rebuke or response as they saw the pressure of Chauvin’s knee lead to the unfortunate death of George Floyd.

This is how it feels to be Black in America — especially in our healthcare system. The pressures of racial and social inequities pressing on our neck as the bystanders in the healthcare system are watching us scream, “I can’t breathe.”

COVID-19 made the consequences of these pressures evident: although Black people make up 13.4% of the U.S population, they accounted for 26.7% of the COVID-19 cases in the United States. This shows that Black Americans are currently in two pandemics: COVID-19 and racism. Unfortunately, both are very intertwined. In order for us to truly stand on the movement “Black Lives Matter,” we have to also act on the statement “Black Health Matters.” If we don’t care about Black health then we are not truly helping Black lives.

For too long, Black health and Black lives have been ignored. The statistics reveal this reality. African Americans ages 18-49 are twice as likely to die of heart disease as whites and those 35-64 are 50% more likely to have high blood pressure than whites. In addition to this, compared with other groups African Americans tend to develop type II diabetes and high blood pressure at earlier ages.

So, why do these disparities exist? There isn’t a cookie-cutter answer because it is such a multifaceted problem. However, these disparities can in large part be explained by a shortage of Black physicians and inadequate investment into addressing the social determinants of health. Due to segregation driven by racist policies, a disproportionately higher number of low-income, Black communities live in areas with less healthy food options, high rates of pollution, and low access to healthcare.

In addition to these social factors, previous research has shown how racial bias in the healthcare system exacerbates these health disparities. According to a study released in October 2019, an algorithm that predicts which patients need healthcare favored white patients over Black patients who were sicker with comorbidities. Even some medical students still believe that Black patients feel less pain. When you combine the racial bias that exists in our healthcare system with a pandemic that disproportionately hurts the under-resourced, it should be no surprise that Black people are being most severely affected.

However, certain policy changes can help alleviate these disparities. First, there must be a concerted effort in higher education to cultivate and sustain a greater physician pipeline and tailor medical curriculums to address these disparities head-on. Currently, only 5% of physicians are Black, which is well below the 13% of the U.S. who are Black.

This underrepresentation is especially acute for Black men, who make up only 35% of the Black physician workforce and are the only demographic whose gross numbers actually dipped between 1978 and 2014.

There was a 12% increase in the number of physicians from 2010 to 2016 and every year the U.S. population  has increased by over 1,700,000 people per year. Consequently, medical schools should take steps to recruit more Black students. A way to accomplish this could be by instilling a higher amount of accelerated programs that can enable talented Black students to obtain admission into medical school as they start college.

Another way would be for schools to explore adopting test-optional admissions standards and to look at metrics that don’t involve the very expensive, financially taxing MCAT. Medical schools should devote at least one preclinical course unit that deals directly with the social determinants of health and health disparities in their curriculum. This will be to ensure that all physicians go into medical education equipped with the knowledge they need to effectively serve underserved medical populations.

Chronic illness health disparities in the Black community are part of the reason Black Americans are more prone to contract and die from COVID-19. This should be addressed as a national health emergency that the CDC, FDA, HHS, and other public health stakeholders take on to coordinate and develop a national plan to alleviate these healthcare disparities.

This will also involve deep investment on the part of healthcare payers into the social determinants of health. CMS should finalise a proposition that was floated at the end of 2018 to enable hospitals and health systems to pay for the social determinants of health. Addressing housing and food insecurity within the care system would go a long way toward lowering the prevalence and effects of chronic illness in Black communities — including, needless to say, the stress level that is associated with many health issues.

A total of 75% of U.S. healthcare spending is on chronic illness, so tackling health disparities is key to lower health spending. Health disparities lead to a lower length and quality of life for Black Americans. In some cities like Boston, with some of the best health infrastructure in the world, Black neighborhoods have life spans that are decades below those of their white counterparts. For our nation to take on racial justice in the 21st century, it is imperative that our society take on Black health disparities.

As a nation, we can either be like the police officers who idly stood by as George Floyd’s life was taken away or we can implement policy changes that show Black Lives and Black Health Matters.

Victor Agbafe is an incoming Dean’s and Medical Innovation & Medicine scholar at the University of Michigan Medical School and a member of the Harvard Class of 2019; Ayomide Ojebuoboh is a Boston University 2020 graduate. The authors thank Oluwaferanmi O. Okanlami, MD, MS, director of adaptive sports at the Michigan Center for Human Athletic Medicine and Performance, for his editorial contributions and support.

CHERRY NATURAL (JAMAICA) SPOKEN WORD
Cherry Natural considers herself as a feminist dub poet or activist, and her sources of inspiration include the late Jamaican poet Louise Bennett. Louise Bennett is well-known as the first Caribbean poet who used Creole or patois consistently and to great effect in her ballads, and who relentlessly stood up for the people's language as opposed to standard English which was then considered as the only passport to social elevation.
Previous post Racial discrimination may harm Black people’s cognitive health, study finds
Next post Health experts warn racism causes emotional and mental harm