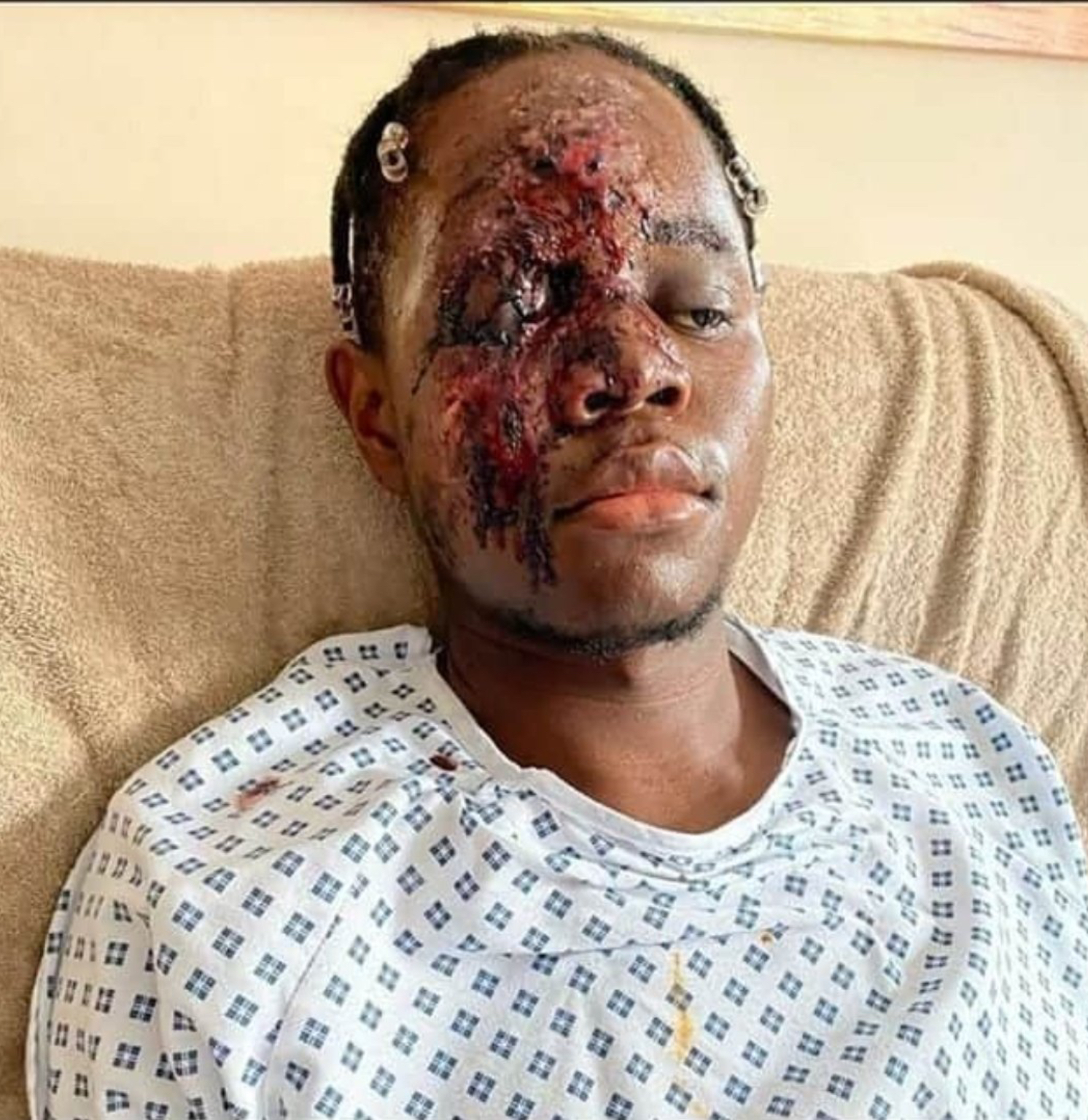 An NHS worker has been seriously injured in a racially aggravated hit and run close to the hospital in Bristol where he is based, police have said.

The 21-year-old man suffered a broken leg, nose and cheekbone, and will require reconstructive surgery. Police said the victim, who is facing six months of rehabilitation, could have been killed.

Witnesses told police that a Honda Accord was deliberately driven at the man as he walked on Monks Park Avenue in Horfield, at about 4.30pm on Wednesday after finishing his shift. It is alleged that the men shouted racist abuse and then abandoned the car.

The man, who works at Southmead hospital, has asked not to be named but has allowed photos of his injuries to be released.

In a statement, he said he faced a long and painful recovery. “I have six months recovery ahead of me, minimum. I will need plastic surgery to my face and leg and am walking on crutches. I don’t want this to happen to anyone else, I want people to be aware.”

The NHS worker will need reconstructive surgery on his leg and face. Photograph: Family Handout/PA

A keen musician, the man was to perform at this summer’s St Paul’s carnival, which was cancelled because of coronavirus. He is also a talented footballer. He was treated in the hospital where he works, undergoing surgery to remove shards of glass from his face.

The victim is facing six months of rehabilitation.

He has been discharged but said the incident had affected him mentally and physically. “I don’t feel safe to walk outside and I can’t play football, record my music, go to the gym or even sleep – I have to try to sleep sitting up,” he said.

“I am lucky to be alive. I want to make sure it doesn’t happen to any other person. I want to raise awareness about racism and I want people to stop this hatred.“

“These men and this attack do not represent Bristol. Bristol is made up of so many different communities and I know so many great people. I have been overwhelmed by all the support I have received both at the scene when it happened and since from friends and the local community.

“I want to thank the witnesses who came forward and those who helped look after me and get me to hospital I want to thank the doctors and nurses who have done all they can to treat my injuries. I want to thank the police for all they are doing to try and bring these offenders to justice. We will bounce back as a family, this will make us stronger. We won’t let the haters win.”

Insp Lorna Dallimore said: “This is a shocking incident in which a vehicle was deliberately driven at the victim and racist language used following the collision.

“I understand and share the concerns people have about this incident. We’re talking with community leaders, the local authority and Sari [the Stand Against Racism & Inequality charity], but we have no evidence to suggest there is a wider risk to the public.

“The individual was left with some very serious injuries. However it could have been far more serious and potentially resulted in a fatality. Incidents like this are thankfully very unusual and Horfield and Southmead are diverse and welcoming areas.”

Friends described the man as quiet and gentle and said he remained good-humoured despite his injuries. An official at the football club he played for said he was “one of the nicest guys” on the team.

There has been tension in Bristol since a statue of the slave trader Edward Colston was toppled and pushed  into the harbour last month. A statue of the black playwright, poet and actor Alfred Fagon was attacked with a corrosive substance and the grave of an enslaved man, Scipio Africanus, who lived in the city in the 18th century, was smashed.

At the weekend a a 59-year-old woman was arrested on suspicion of kicking one officer and racially abusing a second in Bristol.

A spokesperson for Sari, which is supporting the man, said: “We very much hope that the offenders will be identified, charged and prosecuted as swiftly as possible so this appalling crime can be dealt with as it should and to prevent harm to anyone else.”