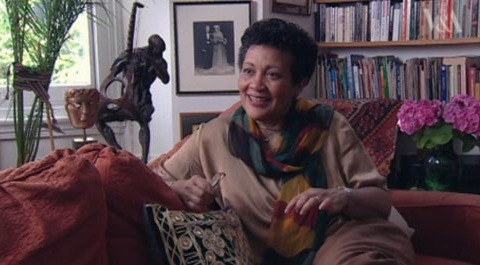 Yvonne was born on 7 October 1938, in Kingston, Jamaica. After travelling to London and studying first at the Rose Bruford College, she was told by Rose Bruford, “well, you do know you’ll never find work” because Yvonne was a person labelled ‘Black’.

She went on to study at the Royal Academy of Music, where she achieved a distinction in Drama and Mime. She said that she felt like a stranger on England’s unwelcoming shores. In later years, she would be appointed a Fellow of Rose Bruford College of Theatre and Performance.

Having completed her studies, Yvonne returned to Jamaica to teach Drama and co-founded The Barn Theatre Company. Yvonne has said that she founded it as although there were already theatres there, none were dealing with the issue of racism.

Norman Manley sought an injunction to close The Barn down, after they performed a play with a character whose life resembled Norman Manley, and the character let the working class of Jamaica down.

She later returned to England where she worked in radio, television and theatre and for the Arts Council of Great Britain. In 1985, she co-founded the Talawa Theatre Company with actresses Mona Hammond and Carmen Munroe.

“At Talawa Theatre Company, our policy was to give black actors work they weren’t being offered – and nobody was offering them the chance to do Shakespeare”, said Yvonne in an interview with David Jays.

In 2005, The Central School of Speech and Drama made Yvonne an Honorary Fellow and the BBC featured her as one of its 100 women series, which examined the role of women in the 21st century, and in particular, those who had made lasting contributions.