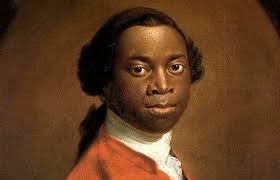 Olaudah was kidnapped from his Nigerian village at age 11, shipped through the gruelling “Middle Passage” of the Atlantic Ocean, worked like a horse in the Caribbean and then sold to a planter from Virginia in the U.S.A. He was then purchased by a British Naval Officer, as a present for his cousins in London. After 10 years working with his British ‘owner’ on the high seas, Olaudah ‘bought’ his own freedom.

At 44, he wrote and published his autobiography, The Interesting Narrative of the Life of Olaudah Equiano, Or Gustavus Vassa, The African, registering it at Stationer’s Hall, London, in 1789. In his book, Equiano recalls his childhood in Essaka (an Igbo village formerly in northeast Nigeria). His writing gives us a unique insight into traditional African life before the arrival of the European invaders. He also recounts his travels throughout the Americas, Turkey, and the Mediterranean and his participation in major naval battles during the French and Indian War (Seven Years’ War).

Olaudah worked alongside Granville Sharpe in the British Abolitionist Movement. He was appointed to an expedition to settle London’s poor Blacks in Sierra Leone, which at the time was a British colony, situated in West Africa.  However, he never lived to make the earthly journey back to his home continent, instead of making the spiritual journey to join his ancestors on 31 March 1797 aged 52.