ALT RIGHT: A PRIMER ON THE NEW WHITE SUPREMACY 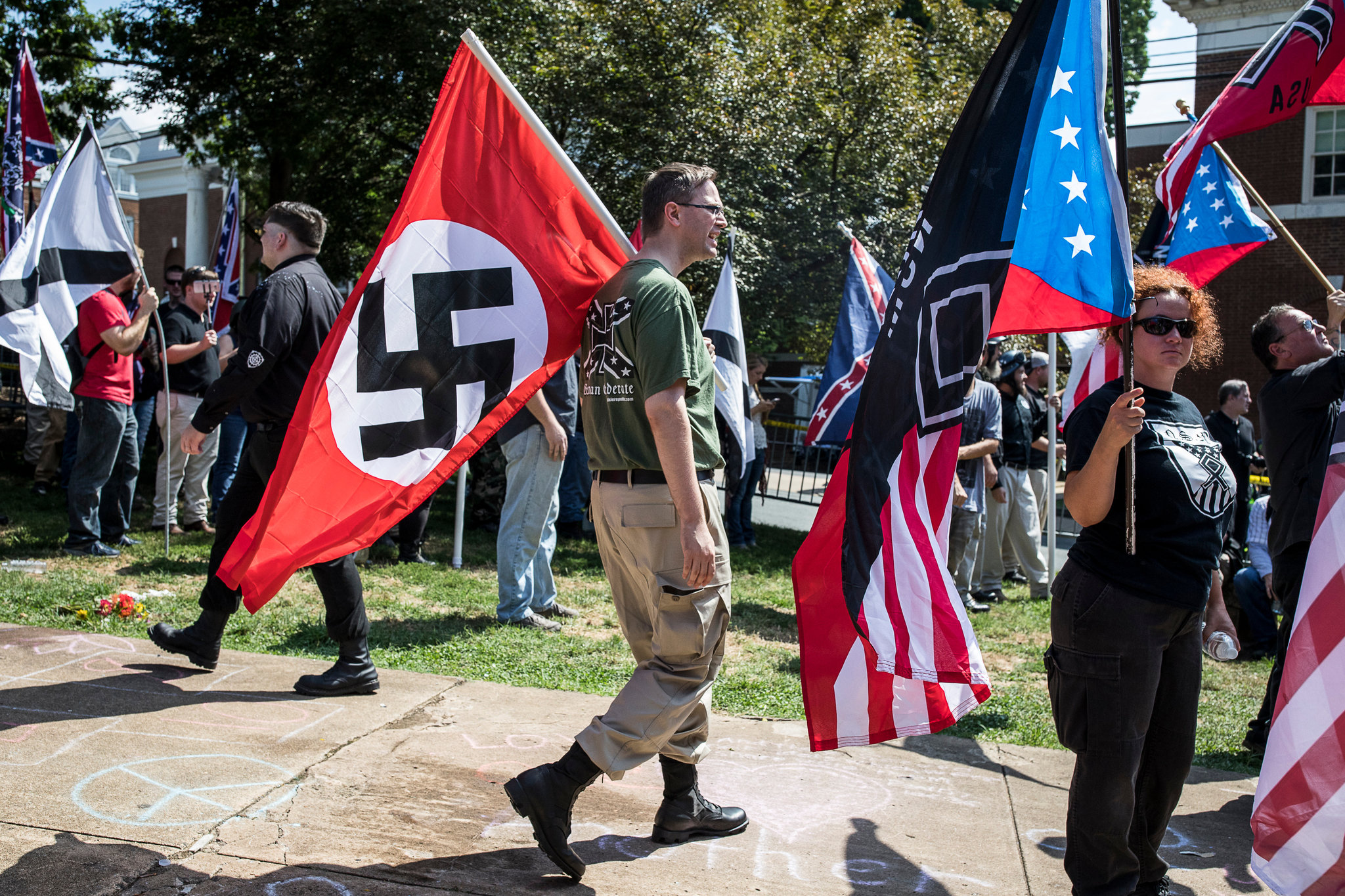 Origins of the term

White supremacist Richard Spencer, who is President and Creative Director at the National Policy Institute, a tiny white supremacist organization, coined the term “alternative right” in August 2008 in an article in Taki’s Magazine, a far-right publication.

At the time, Spencer was using “alternative right” to refer to people on the right who distinguished themselves from traditional conservatives by opposing, among other things, egalitarianism, multiculturalism and open immigration. That same year, Paul Gottfried, a Jewish paleo-conservative, employed the term “alternative right” when he gave a speech entitled, “The Decline and Rise of the Alternative Right,” at the H.L. Mencken Club’s Annual Meeting in November 2008. For this reason, some sources credit Gottfried with originating the term.

Spencer further popularized the term when he chose ”Alternative Right” as the name for an online publication that debuted in 2010. Spencer shut the website down in 2013, but it was soon re-launched by Colin Liddell and Andy Nowicki, former writers for Alternative Right.  Spencer went on to found another journal, Radix. Both Alternative Right (rebranded as Affirmative Right) and Radix are forums for racists, antisemites and others who identify with the alt right.

What is the ideology of the alt right?

Alt right adherents identify with a range of different ideologies, all of which center on white identity. Many claim to be Identitarians, a term that originated in France with the founding of the Bloc Identitaire movement and its youth counterpart, Generation Identitaire. Identitarians espouse racism and intolerance under the guise of preserving the ethnic and cultural origins of their respective counties. American Identitarians, including Richard Spencer, claim to want to preserve European-American (i.e., white) culture in the U.S.

As Michael McGregor, a writer and editor for Radix, wrote in February 2015, Identitarians want “the preservation of our identity–the cultural and genetic heritage that makes us who we are.”  Identitarians reject multiculturalism or pluralism in any form.

Others in the alt right identify as so-called radical traditionalists, people who want to preserve what they claim are traditional Christian values but from a uniquely white supremacist perspective. Some in the alt right identify as white nationalists who want to preserve the white majority in the U.S., claiming that whites losing their majority status is equivalent to “white genocide.”  They issue mendacious propaganda on subjects like immigration and “black crime” as “evidence” of whites’ imperiled status.

Another segment of the alt right refers to themselves as neo-reactionaries (those who reject liberal democracy and ideas associated with the Enlightenment. Some neo-reactionaries refer to their theories as the “Dark Enlightenment.”)  Others call themselves “race realists” or alternately “HBD” advocates, a reference to human biodiversity (a belief that one’s race governs traits such as behavior and intelligence—with non-whites being inferior to whites). However they define themselves, alt righters reject egalitarianism, democracy, universalism and multiculturalism.

Many alt righters are also blatantly antisemitic and blame Jews for allegedly promoting anti-white policies such as immigration and diversity.

In 2015, alt righters began disparaging members of the conservative movement with the derogatory term “cuckservative,” a com­bi­na­tion of “con­ser­v­a­tive” and “cuck­old,” that is used by white supremacists to describe a white con­ser­v­a­tive who putatively pro­motes the inter­ests of Jews and non-whites over those of whites.  The alt right also refers disparagingly to the mainstream conservative movement as Conservatism, Inc. or Conservative, Inc., in an effort to highlight its associations with wealthy donors (whom the white supremacists dismiss as pro-immigration globalists whose policies undermine white nationalism in America).

Who makes up the alt right?

The alt right is an extremely loose movement, made up of different strands of people connected to white supremacy.

One body of adherents is the ostensibly “intellectual” racists who create many of the doctrines and principles of the white supremacist movement. They seek to attract young educated whites to the movement by highlighting the achievements and alleged intellectual and cultural superiority of whites.  They run a number of small white supremacist enterprises, including organizations, online publications and publishing houses. These include National Policy Institute, run by Richard Spencer; Counter Currents Publishing, run by Greg Johnson; American Renaissance, run by Jared Taylor; and The Right Stuff, a website that features numerous podcasts with a  number of contributors.

Alt righters use terms like “culture” as substitutes for more divisive terms such as “race,” and promote “Western Civilization” as a code word for white culture or identity.

The Groypers are the latest alt right group to grab media attention. This loose network of alt right figures want to normalize their racist and antisemitic views, and are undertaking an organized effort to publicly lambast mainstream conservative organizations like Turning Point USA (TPUSA) for failing to promote an “America First” agenda and for not being adequately “pro white.”

The subculture of the alt right

The alt right also has its own subculture and “language” – and both tend to attract young, white men. Many of these young men are active in the Chan world, including 4Chan, 8Chan (now defunct) and Reddit.  These message boards, where most people post anonymously, are a key source of internet memes and trolling efforts, which often target women and minorities. For example, it is common to find memes that belittle the Holocaust and depict well-known Jewish figures, among others, being gassed.  The memes’ creators hold that bigoted “humor” and “irony” help attract new followers to the alt right.

Another aspect of the alt right subculture is its connection to the online world of misogyny known broadly as the “manosphere.” Men in this movement believe they are being stripped of power by women and pro-feminist social structures.

They also are hostile to women on a personal level, with some believing that women are objects to be possessed and used for sexual gratification, while others resent women for their own inability to attract them or to form meaningful relationships with them.

One incident that preceded the advent of the alt right but anticipated its misogyny was Gamergate. In 2014, males in the gaming community expressed hostility and resentment toward certain female gamers and attacked and threatened them online. This pushed a number of women to leave that community. Gamergate showed alt right adherents the effectiveness of online harassment campaigns against their perceived enemies.

In 2015 and 2016, a number of people who considered themselves part of the alt right were not white supremacists, but held certain views that aligned with white supremacist ideology: they were anti-immigrant, anti-globalism, anti-feminism and believed that the left and/or liberals are actively working to destroy American culture.

These people became known as the “alt lite.” In late 2016, the alt right and alt lite definitively split when people associated with the alt lite, including Mike Cernovich and Lucien Wintrich, began to distance themselves from the negative publicity surrounding the alt right’s white supremacist views. The split became very clear after Richard Spencer and some of his followers were caught on video giving Nazi salutes during a National Policy Institute conference shortly after the 2016 election.

The 2017 Unite the Right rally in Charlottesville, Virginia, was a peak moment for the alt right. The event brought together between 500 and 600 white supremacists, including Klan members, neo-Nazis and racist skinheads.   A torchlit rally the night before the event was attended largely by alt right adherents, and the next day’s gathering was the largest public white supremacist event in decades.

The alt right’s moment of triumph was cut short, however, when a white supremacist named James Fields used his car to murder counter-protester Heather Heyer, and wound many others.

The repercussions were immediate for the alt right, and for the larger white supremacist community. Scores of them were “doxxed”—their real identities exposed— and as a result, some were fired from their jobs, had to leave their universities, or were rejected by their families or romantic partners. Many white supremacists’ social media accounts and websites were taken off line and some were kicked off popular crowdfunding websites, eliminating a key income source.

More than two years after Charlottesville, efforts to deplatform white supremacists continue, even as many have migrated to newer, less-scrutinized platforms like Discord and Telegram.

Alt right groups have also turned away from large rallies and have focused on distributing white supremacist propaganda, particularly on college campuses, and holding small flash demonstrations and private events.

In addition to criminal cases, Unite the Right organizers, including alt right leaders, have been dogged by civil lawsuits at both the state and federal levels, and are accused of conspiring to plan the rally and promote violence in Charlottesville.

Lawsuits are not the only irritant affecting white supremacists since Unite the Right. In July 2018, Richard Spencer was refused entry into Europe while en route to Sweden to speak at an alt right conference.  Jared Taylor was banned from Europe in March 2019 and Greg Johnson was deported from Norway in May 2019.

Meanwhile, alt right leader Spencer, who helped spearhead the events in Charlottesville, has become increasingly unpopular in the alt right due in part to the perception that he failed to capitalize on the energy generated by Unite the Right.