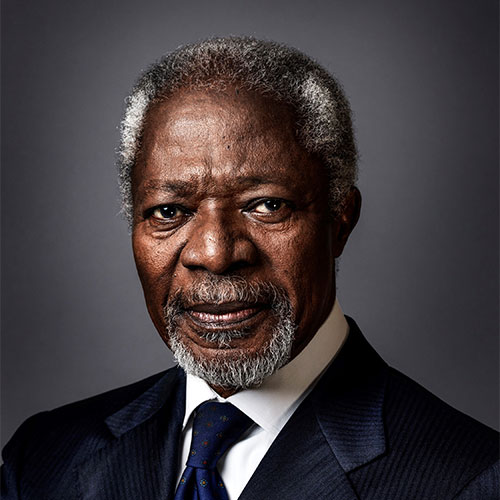 Kofi Atta Annan, born on April 8, 1938 in Kumasi, Ghana, served as the seventh Secretary-General of the United Nations (UN) between 1997 and 2006. He was the first person of African descent to hold that post.  Annan grew up in Kumasi but attended Mfantsipim School, an elite boarding school in Cape Coast.  He graduated in 1957, the year Ghana gained its independence.  Annan attended Macalester College in St. Paul, Minnesota, graduating in 1961 with a degree in economics.  He then completed graduate level work, also in economics, at the Institut universitaire des hautes études internationales in Geneva, Switzerland from 1961 to 1962.  Annan returned to the United States and earned a Master’s of Science in management in 1972 at the Massachusetts Institute of Technology (MIT).  Annan fluently spoke French, English, and a number of African languages.

Kofi Annan joined the United Nations in 1962 when he went to work for the World Health Organization (WHO) as a budget officer.  Afterwards, he was involved with the United Nations in a number of different branches, including serving as the UN High Commissioner for Refugees and the UN Emergency Force in Ismailia, Egypt. Annan was assigned to the UN Headquarters in New York where he worked with issues ranging from human resources management to peacekeeping.  He was, for example, the Under-Secretary General for Peacekeeping between 1992 and 1996 during the time of the Rwandan Genocide and the Bosnian crisis.

On January 1, 1997, Kofi Annan became the Secretary-General of the United Nations.  He served a second five year term beginning in 2002. Annan is the first Secretary-General to have been appointed from a UN staff position.  In 2005, he helped establish two new bodies within the UN–the Peacebuilding Commission and the Human Rights Council.  His involvement with peacekeeping was vast, as he played key roles in a number of international negotiations.  In 1996, he facilitated negotiations with Baghdad, Iraq in regards to their oil sales as funding humanitarian relief.  In 1999, he played an important role in helping ease tensions between Libya and the UN Security Council. During the same period, he also persuaded the international community to focus on the violence that was occurring in East Timor.  Two years later, in 2000, he helped facilitate Israel’s withdrawal from Lebanon.  During his time as Secretary-General, Annan also worked to combat HIV, especially in Africa, leading to a new UN agency in 2002, the Global AIDS and Health Fund.

Annan’s years at the UN focused on creating relationships between the organization, citizens, and non-governmental agencies.  Such relationships, which marked a sharp departure from the UN’s prior emphasis on government to government cooperation, have allowed the international organization to address new concerns such as environmental sustainability, human rights, global poverty and inequality, stopping the spread of pandemic diseases, improving education, and fighting global terrorism.  In 2001, Annan jointly won the Nobel Peace Prize, along with the United Nations itself, for his peacekeeping work.  He received several honorary degrees and numerous other national and international honors.

In 2007, after stepping down as UN Secretary-General, Annan founded the Kofi Annan Foundation, a non-profit organization that works to promote better global governance with the aim of achieving a fairer, more peaceful world. In February 2012, he was appointed at the UN-Arab League envoy to Syria to end the civil war in that nation. He resigned in August 2012 when he could not broker an agreement between the Syrian government and the rebels.

Annan was married twice, first to Titi Alakija, a Nigerian, from 1965 to 1983, and later to Nane Marie Lagergren from 1984 to his death.  Lagergren was a Swedish attorney at the UN, and a niece of the diplomat Raoul Wallenberg.