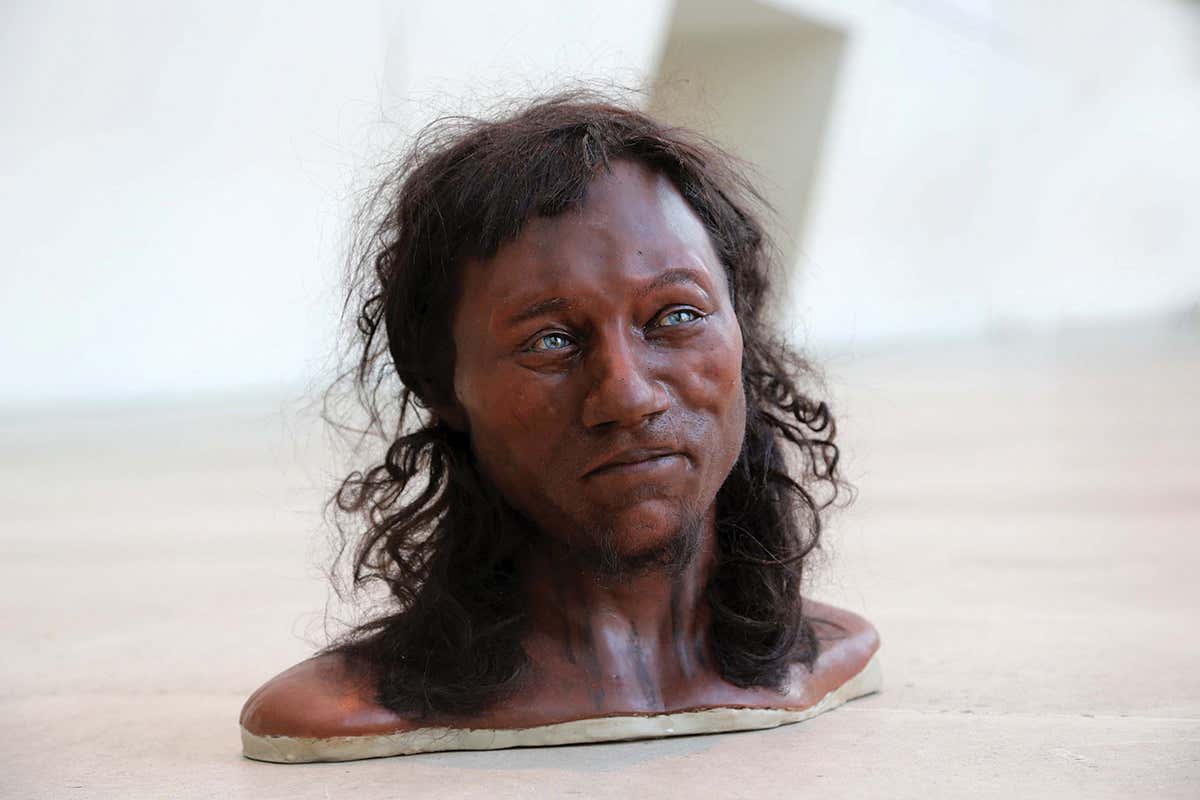 Ancient DNA from Cheddar Man, a Mesolithic skeleton discovered in 1903 at Gough’s Cave in Cheddar Gorge, Somerset ,England, has helped Museum scientists paint a portrait of one of the oldest modern humans in Britain.

Cheddar Man lived around 10,000 years ago and is the oldest almost complete skeleton of our species, Homo sapiens, ever found in Britain.

New research into ancient DNA extracted from the skeleton has helped scientists to build a portrait of Cheddar Man and his life in Mesolithic Britain.

The biggest surprise, perhaps, is that some of the earliest modern human inhabitants of Britain may not have looked the way you might expect.

‘Until recently it was always assumed that humans quickly adapted to have paler skin after entering Europe about 45,000 years ago,’ says Tom. ‘Pale skin is better at absorbing UV light and helps humans avoid vitamin D deficiency in climates with less sunlight.’

However, Cheddar Man has the genetic markers of skin pigmentation usually associated with sub-Saharan Africa.

This discovery is consistent with a number of other Mesolithic human remains discovered throughout Europe.

‘He is just one person, but also indicative of the population of Europe at the time,’ says Tom. ‘They had dark skin and most of them had pale colored eyes, either blue or green, and dark brown hair.’

‘Cheddar Man subverts people’s expectations of what kinds of genetic traits go together,’ he adds.

‘It seems that pale eyes entered Europe long before pale skin or blond hair, which didn’t come along until after the arrival of farming.’

Who was Cheddar Man?

Cheddar Man was a Mesolithic hunter-gatherer (fully modern human) with dark skin and blue eyes. He was about 166 centimetres tall and died in his twenties.

His skeleton was uncovered in 1903 during improvements to drainage for Gough’s Cave, a popular tourist attraction.

When he was first found, there were claims that Cheddar Man was the long-sought earliest Englishman, with exaggerated dates of 40,000-80,000 years. But subsequent radiocarbon dating from the 1970s onwards suggests he lived around 10,000 years ago.

His skeleton shows a narrow pelvis shape. It’s uncertain whether a hole in his forehead was from an infection or from damage at the time of excavation.

Like all humans across Europe at the time, Cheddar Man was lactose intolerant and was unable to digest milk as an adult.

At the time Cheddar Man was alive, Britain was attached to continental Europe and the landscape was becoming densely forested.

‘Cheddar Man belonged to a group of people who were mainly hunter gatherers,’ says Tom. ‘They were hunting game as well as gathering seeds and nuts and living quite complex lives.’

In addition to seeds and nuts, his diet would have consisted of red deer, aurochs (large wild cattle) along with some freshwater fish.

While Cheddar Man was not found with any recorded animal or cultural remains, other Mesolithic sites offer clues about his diet and the kind of cultural life he may have been part of.

Star Carr was a Mesolithic settlement in North Yorkshire that predates Cheddar Man by around 1,000 years.

There, archaeologists uncovered red deer skull-caps (which may have been worn as headdresses), semiprecious stones including amber, hematite and pyrite and an engraved shale pendant known as the oldest Mesolithic art in Britain.

While impossible to say for certain, similar kinds of objects may have been familiar to Cheddar Man.

Most of the Mesolithic human remains that date to this period were discovered in caves and there is a strong tradition of cave burial in the region.

‘About a mile up the road from where Cheddar Man was found, there is another cave known as Aveline’s Hole which is one of the biggest Mesolithic cemeteries in Britain. Archaeologists found the remains of about 50 individuals, all deposited over a short period of 100-200 years,’ says Tom.

Cheddar Man’s case is quite unusual because at a time when communal burials were common, he was found buried alone.

‘He was recovered from sediment but it wasn’t clear whether he had been buried or just covered in sediment over time by natural mineral deposits in the cave,’ says Tom.

‘So he could have been special, or he may just have curled up and died there.’

According to several Victorian accounts, a large quantity of bones, teeth of extinct animals, flint knives and bone instruments were, unfortunately, wheelbarrowed out from the site and discarded. Some must have been from earlier occupations of the cave but it is possible some would have held additional clues about the life of Cheddar Man and other humans who once lived in the region.

A fresh take on ancient DNA

Coaxing data from ancient DNA can be painstaking work. Dr Selina Brace specialises in ancient DNA at the Museum and worked closely on Cheddar Man.

‘Ancient DNA doesn’t necessarily mean that the specimen you’re working with is thousands of years old,’ Selina explains. ‘It just means that the DNA is degraded.’

As soon as an organism dies, DNA begins to break down. Temperature and humidity also make a big difference to the quality of data that it’s possible to extract.

‘To extract ancient DNA from a human or animal what you’re looking for is a dense bone which might have protected the DNA inside it as much as possible.’

‘We used to use leg bones or teeth as the thick bones and enamel keep DNA quite intact, but in the last two years we’ve shifted to using the petrous, or inner ear bone, which is the densest bone in the human body,’ she says.

‘However it isn’t a golden egg,’ cautions Selina. ‘You can still fail to retrieve useful DNA. But if the body was deposited in a good environment, where there was a cool and constant temperature then the petrous bone is a good place to find useful ancient DNA.’

After extracting the DNA Selina and the team used next-generation shotgun sequencing, which involves defining millions of fragments of DNA distributed randomly across the genome, to create a library of Cheddar Man’s DNA and map what they found against a modern human genome.

‘We had a lot of genetic data but you have to kind of know what you’re looking for,’ says Tom. ‘I had taken a recreational DNA test that looked specifically at physical traits, and they had helpfully listed the markers they use to come up with their assessments.’

‘We were able to send that list of markers to our own bioinformatics lab to help us develop a portrait of Cheddar Man.’

The model of Cheddar Man was made by Kennis & Kennis Reconstructions who specialise in palaeontological reconstructions.

The artists took measurements of the skeleton, scanned the skull and 3D printed a base for their model.

‘Of course facial reconstruction is part art and part science,’ Tom says ‘but there are some standards of how thick the tissue is in different regions of people’s faces so they can use those conventions to develop the morphology of the face.’

Are you related to Cheddar Man?

Modern-day British people share approximately 10% of their genetic ancestry with the European population to which Cheddar Man belonged, but they aren’t direct descendants.

Current thinking is that the Mesolithic population that Cheddar Man belonged to was mostly replaced by the farmers that migrated into Britain later.

Visit the Museum to see Cheddar Man in person in the Human Evolution gallery. Both the skeleton and facial reconstruction are on display.

Cheddar Man skeleton is on loan to the Museum from the Longleat Estate.