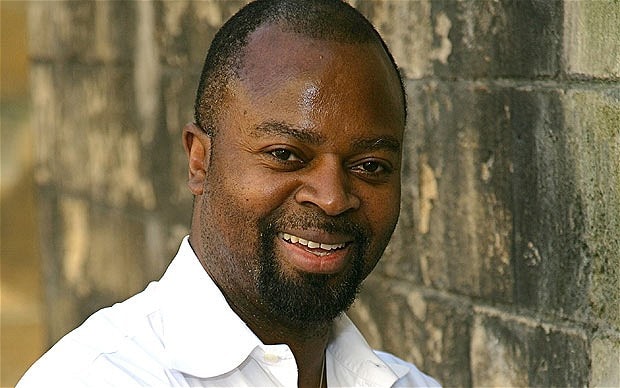 The author Ben Okri was born March 15, 1959 in the small town of Minna in northern Nigeria.  His mother, Grace Okri, was of the Igbo ethnic group while his father, Silver Oghekeneshineke Loloje Okri was an Urhobo.  Ben’s father was a clerk with Nigerian Railways until after the Nigerian independence of 1960, when he left for London, UK to study law.

Ben Okri joined his father in 1962, and attended the John Donne Primary School at Peckham in London.  He had to return to Nigeria with his mother in 1966, however, where he attended the schools Ibadan and Ikenne before beginning his secondary education at Urhobo College at Warri.  He was the youngest in his class when he began his studies at Urhobo in 1968 and was only 14 at the end of his secondary education in 1972.  He then moved home to Lagos, Nigeria to study on his own.

Okri describes 1976 as the year he first became interested in writing.  It was in this year that his father returned from England, bringing with him a variety of books by various authors, including Charles Dickens, Mark Twain, and Aristotle as well as Greek and Roman histories.  These books were a primary factor in sparking Okri’s interest in literature.  He also attributes his early writings from this time to his frustration and failure to gain admission into any Nigerian university, claiming he “wrote as a way of waiting,” while continuously applying to schools.  He found employment at a paint company and began writing articles of social criticism, which he submitted to local newspapers.  When these articles were rejected, he wrote short stories based on them.  These short stories were his first published works, accepted and printed in women’s journals and Nigerian evening papers.

Unable to attend school in Nigeria, Okri returned to England in 1978 at the age of 19 to begin his studies at the University of Essex where he studied English and philosophy while working on his first novel, Flowers and Shadows (1980).  Due to his lack of financial resources, Okri was unable to complete his studies at Essex.  He then worked from 1983 to 1986 as the poetry editor for West Africa magazine. During this time he also worked for the BBC Africa service.

Okri has won several awards and critical praise for his works.  Considered his masterpiece, The Famished Road won the 1991 Booker Prize for Fiction.  In 1984 he was awarded an Arts Council bursary, and in 1987 he won a Commonwealth Writer’s Prize for Africa and a Paris Review Aga Khan Prize for Fiction.  He currently lives in London, England and continues to write.