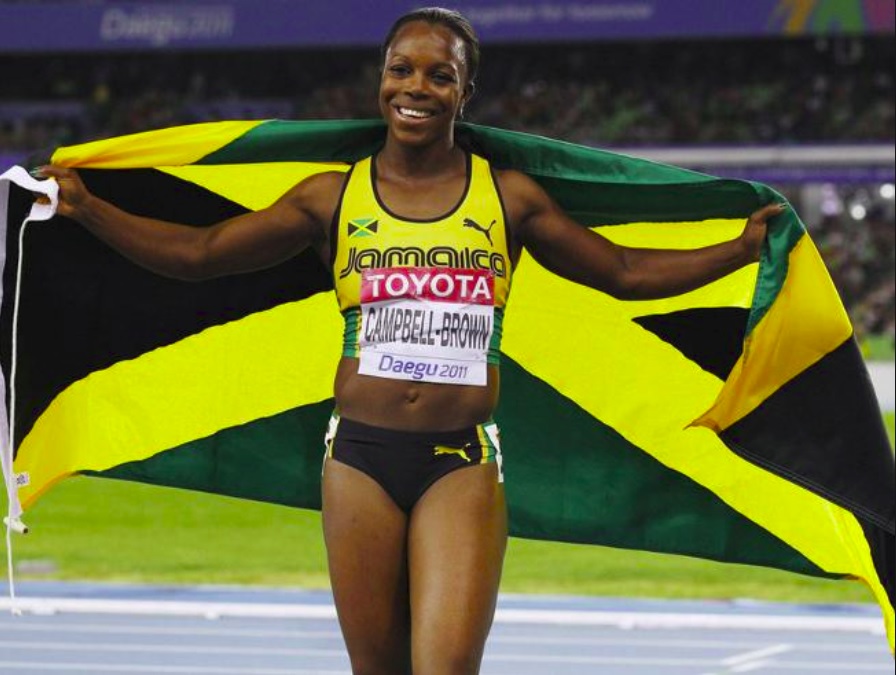 Veronica Campbell-Brown is a Jamaican track and field sprinter, who competes in 100- and 200- meter races. She is one of only nine athletes to win world championships at the youth, junior, and senior levels. Campbell-Brown’s personal best in the 100 meters (10.76) and 200 meters (21.74) ranks her among the all-time top ten in those events. She has earned a total of forty-six medals in her career (twenty-seven gold, sixteen silver, and three bronze).

Born on May 15, 1982, in Clarke’s Town, Trelawny, Jamaica, Campbell-Brown is one of nine children born to Cecil Campbell and Pamella Bailey. She showed early promise in athletics, sprinting to victory barefoot during a school sports day. Her athleticism and high academic marks earned her a scholarship at one of Jamaica’s prestigious high schools, Vere Technical.

In 1999 while still in high school, Campbell won gold and silver medals for the 100-meter sprint at the International Association of Athletics Federation (IAAF) World Youth Games in Bydgoszcz, Poland. Competing at the 2000 Summer Olympics, the eighteen year old won her first Olympic medal, claiming silver in the 4×100 relay.

Campbell-Brown moved to the United States in 2002, attending Barton County Community College in Great Bend, Kansas, and later the University of Arkansas from which she graduated in 2006. One year later, she married her high school sweetheart, Omar Brown, a fellow Jamaican sprinter and University of Arkansas alumnus.

She represented Jamaica at the 2004 Athens Olympics where she took bronze in the 100 meters, gold in the 200 meters, and gold in the 100-meter relay. At the 2005 IAAF World Championships, Campbell won silver medals in the 100 meters and the 4×100-meter relay. Having won World Youth 100m (1999) and IAAF World Junior in 2000, she became the first athlete (male or female) to win the full offering of IAAF sprint titles available.

The 2008 Beijing Olympics saw her being named the second woman in Olympic history to successfully defend her 200 meter title. That year, Track and Field News selected her as the top 200-meter runner in the world, as well as the fourth best in the 100 meters. The following year, she was named UNESCO Goodwill Ambassador, a role she has used to advocate gender equity in sports.

The 2010 Doha World Indoor Championships in Qatar saw her winning gold in the 60 meters and silver in the 100 meters. She secured the 200-meter crown at the 2011 World Outdoor Championship, also winning silver in the 100-meter sprint and 4x100m relays. Although she failed to defend her 200-meter title at the 2012 London Olympics, Campbell-Brown placed third in the 100-meter sprint and second in the 4×100 relays.

At the 2016 Rio Olympics, she failed to medal. By then, she had been competing at the top of the sport for sixteen years, becoming one of track and field’s most decorated female athletes.

Displaying the ability to juggle academics and athletics with equal ease, VCB secured her Bachelor of Science degree in 2006 from the University of Arkansas in Fayetteville. An avid bowler, the daughter of Cecil Campbell and Pamella Bailey  and now wife of 2006 Commonwealth Games 200 meter Champion Omar Brown, VCB has come a long way from Trelawny and intends to continue creating history!

The Veronica Campbell Brown Foundation was established out of a burning passion to assist and uplift young women who are underrepresented and lacking in the necessary resources to succeed in life.

The Foundation aims to accomplish this on a twofold basis:

1. Providing for students necessary resources inclusive of a high school education from the entry grade through graduation.

2. Establishing a mentorship program among females aimed at advancing their self worth.