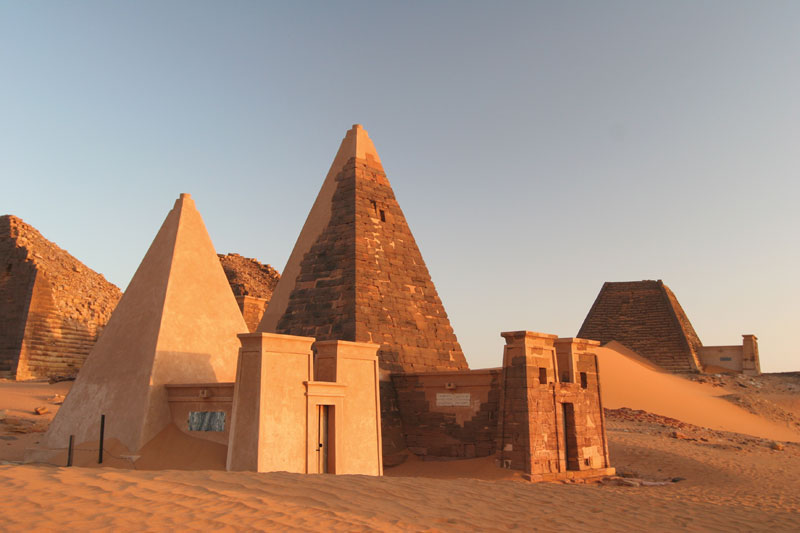 Adorned with tall, slender pyramids, the wealthy Nile city of Meroë was the seat of power of Kush, an ancient kingdom and rival to Egypt.

Rising high in the sky in the modern-day nation of Sudan is a plethora of pyramids. They mark the site of the ancient city Meroë, a UNESCO World Heritage site. The center of a powerful civilization, Meroë served as the capital city of Kush whose robust culture thrived for centuries. Their grand architecture and works of art left a lasting testament to the greatness of the Nubian kings and queens.

Located in the desert sands near the Nile in modern Sudan, the ancient culture of Nubia played a decisive role in shaping Egypt from the eighth century B.C., serving as that kingdom’s 25th dynasty in the Late Period. After the Nubian pharaohs lost power, they retreated south from Egypt to form the Kingdom of Kush, which thrived in splendid isolation as the rest of Egypt suffered through repeated invasions from Assyrians, Persians, and Greeks.

Because of Meroë’s distance, the Kushites were able to retain their independence, developing their own vibrant hybrid of Egyptian culture and religion until well into the fourth century A.D. With access to mines and minerals, the Meroites were expert goldworkers. They built temples, palaces, and royal baths in their capital. Perhaps their grandest achievements are the more than 200 pyramids built at the necropolis at Meroë, giving Sudan more pyramids than all of Egypt. Tall, slender, graceful: These monuments bear witness to the lasting splendor that was Kush.

In the late 20th century A.D. Swiss archaeologist Charles Bonnet spent decades excavating the lands surrounding the southern Nile. He found evidence of a civilization grown rich from trade and abundant with fields and livestock, a kingdom distinct from Egypt with its own material culture and traditions. This civilization grew in power just as Egypt’s Middle Kingdom was in decline around 1785 B.C. By 1500 B.C., the Nubian empire roughly stretched from Wadi Halfa south to Meroë.

Centered on its original capital at Napata, the Nubian ruling dynasty continued to flourish militarily and economically through the ninth century B.C. Around 730 B.C., the Nubian king, Piye, successfully invaded and conquered Egypt, extending his control to the whole Nile Valley. Piye became the first pharaoh of Egypt’s 25th dynasty (ca 770-656 B.C.), the so-called Black Pharaohs.

Piye died in 715 B.C., having reigned 35 years. Although he had returned to Nubia after conquering Egypt, he wished to be buried in the Egyptian style, a request his subjects granted. Entombed in a pyramid, Piye was the first pharaoh in more than 500 years to be buried this way.

The 25th dynasty would last for three-quarters of a century. Its reign ended in turmoil when an Assyrian invasion of Egypt caused it to fall from power. The victors struck the names of the 25th dynasty from monuments across Egypt, destroying their statues and stelae to erase their names from history.

After the defeat, the Nubians retreated to Napata, only to be forced farther south at the beginning of the sixth century B.C., when Pharaoh Psamtek II, part of the 26th dynasty, sacked Napata. The Kushites designated the city of Meroë, which sat farther south along the Nile, as the new capital. This new location was carefully considered. Not only strategically positioned at the crossroads of inland African trade routes and caravan trails from the Red Sea, the land around Meroë was also fertile and blessed with significant natural resources—iron and gold mines that fostered the development of a metals industry, especially goldworking.

The Kushites’ burial culture had been touched by a synthesis of Egyptian and African religious and cultural practices. Even after relocating south, the Kushite kings continued to be buried in the necropolis at Nuri, near Napata, a center of the cult of the Egyptian god Amun.

Meroë would become the preferred necropolis later, around 250 B.C. There are two main burial areas: the south cemetery and the northern burial ground. The south cemetery was the oldest. When it reached capacity, the northern burial ground was begun. The northern area today contains the best preserved of the pyramids at Meroë. Some of the most impressive tombs here are the final resting places for 30 kings, eight queens, and three princes.

Meroë’s earliest pyramids were step pyramids. Scholars have speculated that cylinders or spheres may have once topped the pyramids, made of materials that have since been destroyed or perished. The later structures, built in the third century A.D., are simpler with smooth, steep sides. In spite of the clear influence of the classic Egyptian design, Meroë’s pyramids are notably smaller and generally lack the pyramidion, a pointed capstone. Their design more closely resembles the chapel pyramids built at Deir el Medina near Luxor. These were built during Egypt’s New Kingdom period (1539-1075 B.C.), a period when many Egyptian customs began to appear in Kushite culture.

The stones were set in place with a shaduf, or shaft, a device used as a lever to raise stone blocks. The outside was faced with brick and then covered with brightly painted plaster.

Steps were carved into the rock to the east of each pyramid leading down to a sealed entrance. Behind it lay underground rooms with vaulted ceilings: three for a king and two for a queen. In the oldest pyramids, the burial chamber was decorated with scenes from the Egyptian Book of the Dead. A wooden coffin, depicting the dead person’s face, was placed in the burial chamber. The sacrificed bodies of animals and, in some cases, of human servants were placed nearby.

Attached to one side of a standard Meroë pyramid was a chapel, its entrance formed by twin tapering pylons. Inside, it was common to place a stela, an offering table, and a distinctive element of Meroë culture: a statue of the ba—the aspect of the human soul believed to give the deceased their individuality—depicted as the body of a bird and a human head.

The endurance of Kush

Kush prospered for centuries, but Queen Cleopatra’s death in 30 B.C. brought change. Egypt became a province of the nascent Roman Empire, straining the fragile truce that the Kushites had brokered with Rome. Tax revolts in Upper Egypt led to Roman incursions into Kushite territory, threatening their lucrative gold mines. Meroite forces attacked Roman troops in Aswan—the most southerly frontier of the Roman world—led by the fearsome Queen Amanirenas of Meroë. In his great work Geography, the Greek scholar Strabo describes her as Queen Candace, “a masculine woman … who had lost an eye.” This memorable commander was eventually beaten back to Meroë, but from then on, the Meroitic civilization was largely left in peace.

Meroë was abandoned in the fourth century A.D. Over the centuries, rumors spread of its monuments and the gold they contained, eventually reaching the Italian tomb robber Giuseppe Ferlini. In 1834 Ferlini arrived in Meroë, where he set about looting the graves. The damage Ferlini caused is still lamented by archaeologists, but the few exquisite artifacts he brought back opened the eyes of European scholars to this mysterious culture that had absorbed the ancient traditions of pharaonic Egypt.

8th Century B.C.
Construction of the south and west cemeteries begins in Meroë, then the second city of the Kingdom of Kush, whose capital was at Napata.

3rd Century B.C.
As space in Meroë’s south cemetery runs out, expansion begins in the north cemetery of the city’s growing necropolis.

250 B.C.
King Arakamani relocates the royal necropolis from near Napata to Meroë, which becomes the kingdom’s spiritual and political capital.

1st Century A.D.
Queen Amanirenas leads her troops against the Romans. Her successor, Amanishakheto, is buried with costly grave goods.

2nd Century A.D.
Building methods change. The Meroë pyramids are faced with brick instead of stone, and then a layer of plaster, which is painted.

A.D. 350
An invasion by the kingdom of Axum brings Meroë’s dominance to an end. The city and royal necropolis are eventually abandoned.

Source: National Geographic. A specialist in the later Egyptian dynasties, Núria Castellano is an Egyptologist at the University of Murcia, Spain.