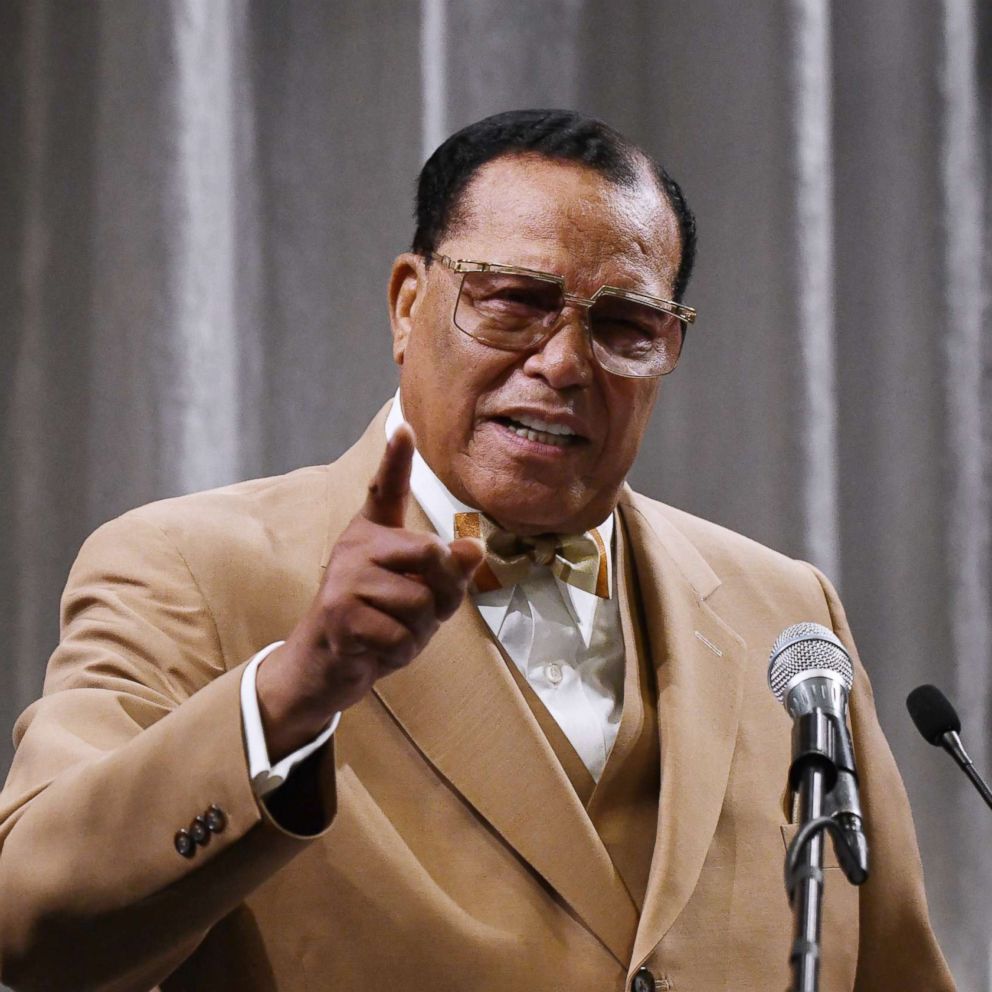 THE HONORABLE MINISTER LOUIS FARRAKHAN: NATIONAL REPRESENTATIVE OF THE HONORABLE ELIJAH MUHAMMAD AND THE NATION OF ISLAM

Minister Louis Farrakhan, born on May 11, 1933 in Bronx, N.Y., was reared in a highly disciplined and spiritual household in Roxbury, Massachusetts. Raised by his mother, a native of St. Kitts, Louis and his brother Alvan learned early the value of work, responsibility and intellectual development. Having a strong sensitivity to the plight of Black people, his mother engaged her sons in conversations about the struggle for freedom, justice and equality. She also exposed them to progressive material such as the Crisis magazine, published by the NAACP.

Popularly known as “The Charmer,” he achieved fame in Boston as a vocalist, calypso singer, dancer and violinist. In February 1955, while visiting Chicago for a musical engagement, he was invited to attend the Nation of Islam’s Saviours’ Day convention.

Although music had been his first love, within one month after joining the Nation of Islam in 1955, Minister Malcolm X told the New York Mosque and the new convert Louis X that Elijah Muhammad had said that all Muslims would have to get out of show business or get out of the Temple. Most of the musicians left Temple No. 7, but Louis X, later renamed Louis Farrakhan, chose to dedicate his life to the Teachings of the Honorable Elijah Muhammad.

The departure of the Honorable Elijah Muhammad in 1975 and the assumption of leadership by Imam W. Deen Mohammed brought drastic changes to the Nation of Islam. After approximately three years of wrestling with these changes, and a re-appraisal of the condition of Black people and the value of the Teachings of the Honorable Elijah Muhammad, Minister Farrakhan decided to return to the teachings and program with a proven ability to uplift and reform Blacks.

At 80 years of age, Minister Farrakhan still maintains a grueling work schedule. He has been welcomed in a countless number of churches, sharing pulpits with Christian ministers from a variety of denominations, which has demonstrated the power of the unity of those who believe in the One God. He has addressed diverse organizations, been received in many Muslim countries as a leading Muslim thinker and teacher, and been welcomed throughout Africa, the Caribbean and Asia as a champion in the struggle for freedom, justice and equality.

In 1979, he founded The Final Call, an internationally circulated newspaper that follows in the line of The Muhammad Speaks. In 1985, Minister Farrakhan introduced the POWER concept. In 1988, the resurgent Nation of Islam repurchased its former flagship mosque in Chicago and dedicated it as Mosque Maryam, the National Center for the Re-training and Re-education of the Black Man and Woman of America and the World. In 1991, Minister Farrakhan reintroduced the Three Year Economic Program, first established by the Honorable Elijah Muhammad to build an economic base for the development of Blacks through business ventures. In 1993, Minister Farrakhan penned the book, “A Torchlight for America,” which applied the guiding principles of justice and good will to the problems perplexing America. In May of that year, he traveled to Libreville, Gabon to attend the Second African-African American Summit where he addressed African heads of state and delegates from America. In October of 1994, Minister Farrakhan led 2,000 Blacks from America to Accra, Ghana for the Nation of Islam’s first International Saviours’ Day. Ghanaian President Jerry Rawlings officially opened and closed the five-day convention.

The popular leader and the Nation of Islam repurchased farmland in Dawson, Georgia and enjoyed a banner year in 1995 with the successful Million Man March on the Mall in Washington, D.C., which drew nearly two million men. Minister Farrakhan was inspired to call the March out of his concern over the negative image of Black men perpetuated by the media and movie industries, which focused on drugs and gang violence. The Million Man March established October 16 as a Holy Day of Atonement, Reconciliation and Responsibility. Minister Farrakhan took this healing message of atonement throughout the world during three World Friendship Tours over the next three years. His desire was to bring solutions to such problems as war, poverty, discrimination and the right to education. Minister Farrakhan would return to the Mall on Washington, D.C. in 2000 convening the Million Family March, where he called the full spectrum of members of the human family to unite according to the principle of atonement. Minister Farrakhan performed thousands of weddings, as well as renewed the vows of those recommitting themselves in a Marriage Ceremony.

As part of the major thrust for true political empowerment for the Black community, Minister Farrakhan re-registered to vote in June 1996 and formed a coalition of religious, civic and political organizations to represent the voice of the disenfranchised on the political landscape. His efforts and the overwhelming response to the call of the Million Man March resulted in an additional 1.7 million Black men voting in the 1996 presidential elections. In July 1997, the Nation of Islam, in conjunction with the World Islamic People’s Leadership, hosted an International Islamic Conference in Chicago. A broad range of Muslim scholars from Europe, Asia, Africa and the Middle East, along with Christian, Jewish and Native American spiritual leaders participated in the conference.

Following the September 11, 2001 attacks against the United States, Minister Farrakhan was among the international religious voices that called for peace and resolution of conflict. He also wrote two personal letters to President George Bush offering his counsel and perspective on how to respond to the national crisis. He advised President Bush to convene spiritual leaders of various faiths for counsel. Prior to the war on Iraq, Minister Farrakhan led a delegation of religious leaders and physicians to the Middle East in an effort to spark the dialogue among nations that could prevent war.

Marking a new milestone in a life that has been devoted to the uplift of humanity, Minister Farrakhan launched a prostate cancer foundation in his name May 10-11, 2003. First diagnosed in 1991 with prostate cancer, he survived a public bout and endured critical complications after treatment that brought him 180 seconds away from death.

In July of that year, Minister Farrakhan accepted the request to host the first of a series of summits centered on the principles of reparations. Nearly 50 activists from across the country answered his call to discuss operational unity within the reparations movement for Black people’s suffering in the trans-Atlantic slave trade. Culminating the Nation of Islam’s Saviours’ Day convention in February 2004, Minister Farrakhan delivered an international address entitled, “Reparations: What does America and Europe Owe? What does Allah (God) promise?” stepping further into the vanguard position of leadership calling for justice for the suffering masses of Black people and all oppressed people throughout the world.

In October 2005, after months of a demanding schedule traveling throughout the U.S., Minister Farrakhan called those interested in establishing a programmatic thrust for Black people in America and oppressed people across the globe to participate in the Millions More Movement, which convened back at the National Mall in Washington, D.C. on the 10th Anniversary of the Historic Million Man March. The Millions More Movement involved the formation of 9 Ministries that would deal with the pressing needs of our people. Also in 2005, Minister Louis Farrakhan was voted as BET.com’s “Person of The Year” as the person users believed made “the most powerful impact on the Black community over the past year.”

In April 2006, Minister Farrakhan led a delegation to Cuba to view the emergency preparedness system of the Cuban people, in the wake of the massive failure to prevent the loss of human life after Hurricane Katrina in August 2005.

In January 2007, the Honorable Minister Louis Farrakhan underwent a major 14-hour pelvic exoneration. In just a few weeks, and as a testament to the healing power of God, Minister Farrakhan stood on stage at Ford Field in Detroit, Michigan on February 25, 2007 to deliver the first of several speeches that year with the theme “One Nation Under God.”

On October 19, 2008, after nearly a year of extensive repairs and restoration, Minister Farrakhan opened the doors and grounds of Mosque Maryam to thousands of people representing all creeds and colors during a much anticipated Re-dedication Ceremony themed “A New Beginning.” This day also served as the commemoration of the 13th Anniversary of the Historic Million Man March and Holy Day of Atonement.

The prayers of spiritual leaders representing the three Abrahamic faiths—Judaism, Christianity and Islam—were offered to bless this momentous affair. Those who were present that day, and who watched live via internet webcast throughout the world, witnessed Minister Farrakhan’s message of unity and peace for the establishment of a universal government of peace for all of humanity.

THE AFRICAN DIASPORA IN CHINA
Did you know that China has the largest African migrant population in Asia? They mostly live in a Guangzhou, also known as 'Little Africa' or 'Chocolate City'.

THE AFRICAN DIASPORA IN MEXICO
ave you heard of the slave resistance movement led by Afro-Mexican national hero, Gaspar Yanga? Did you know that Afro-Mexicans were instrumental in winning Mexico's independence? And what about Mexico's only president to date of African descent, Vicente Guerrero? All this and more coming up in this video!