FOUR CHARGED OVER DAMAGE TO COLSTON STATUE IN BRISTOL 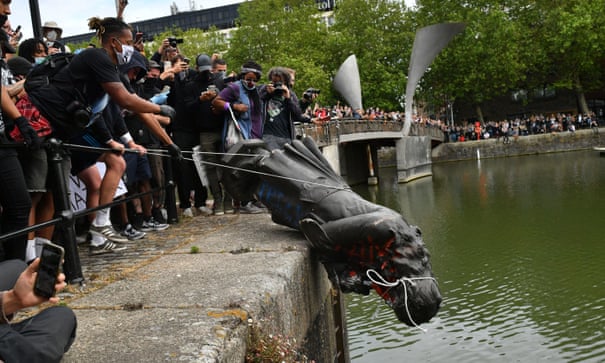 Four people have been charged with criminal damage after the toppling of a statue of the slave trader Edward Colston in Bristol in June this year.

The bronze memorial to Colston, a 17th-century slave merchant, was pulled down during a Black Lives Matter protest on 7 June and was rolled into the water at Bristol harbour. It was recovered by Bristol city council, and the cost of the damage to the statue amounted to about £3,750.

No arrests were made at the time, but Avon and Somerset police investigated. The CPS said on Wednesday it had authorised charges following a review of a file of evidence from the force.

A spokesman said: “The Crown Prosecution Service reminds all concerned that criminal proceedings against all four are now active and that they have the right to a fair trial. It is extremely important there should be no reporting, commentary or sharing of information online which could in any way prejudice these proceedings.”

The bronze statue, which had stood in Colston Avenue since 1895, had long been a focal point for public anger at the continued commemoration of people who had been involved in the city’s slave trade. A petition for its removal had gained thousands of signatures.

The toppling of the Colston statue came in the midst of debate over historic monuments and statues in the UK and elsewhere in the world, sparked by the Black Lives Matter protests in the wake of the police killing of George Floyd in the US.

Belgian authorities in Antwerp took down a statue of Leopold II after it was set on fire and daubed with paint, and there have been numerous petitions and campaigns across the globe to remove other statues linked to racism and colonialism.

The plinth on which Colston’s statue stood is now empty, after being briefly occupied by other installations over the past few months.