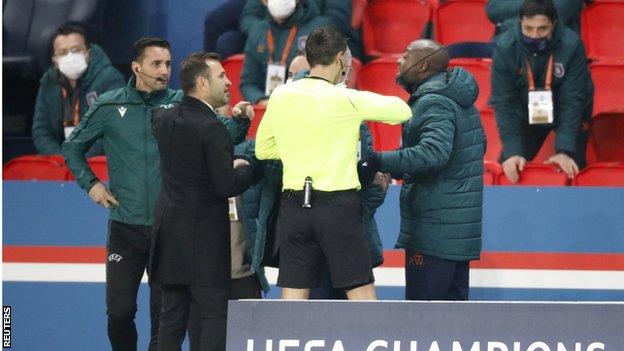 PSG are playing Istanbul Basaksehir in a Champions League game at Parc des Princes, which is PSG’s home stadium.

In the 14th minute of the Group H tie, the Assistant Coach for Istanbul Basaksehir,former Cameroonian international Pierre Webo, is sent off and 4th official Sebastian Coltescu, who is Romanian, identifies Webo by his skin colour describing him as “Al Negru” which apparently means “the Black one”, when describing Webo to the referee.

In a statement, Uefa said: “Uefa has – after discussion with both clubs – decided on an exceptional basis to have the remaining minutes of the match played tomorrow with a new team of match officials.

“A thorough investigation on the incident that took place will be opened immediately.”

The game resumed the next day with a different set of match officials on Wednesday 9 December 2020, when PSG beat Istanbul Basaksehir 5-1.

At the match, Webo was presented with a shirt signed by all the PSG players with his name and the number 9 on the back.