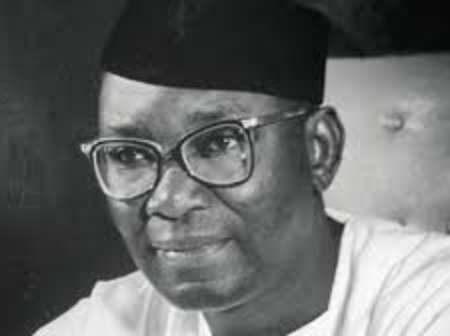 Pa Michael Imoudu was born in Ukpafikan, quarters, Oke Ora near Sabongida Ora in Edo State.  Family sources place his birth around 1900.  He attended Government Schol, Ora. After gaining Promotion to Standard 1, which was in fact double promotion from the infant classes, he accompanied his paternal uncle to Sapele.  His uncle’s frequent change of location took young Imoudu further to Onitsha, and finally to Agbor, where he sat for and passed the standard six examination.  Here he ended his formal education and decided to move into Lagos to seek employment.

Mr. Michael Imoudu’s first job was with the posts and telegraphs department as a lines man, but not finding job satisfaction, he decided to make a change.  He then got a job with the Nigerian Railways, first as a general labourer, then as apprentice turner, and later as a journeyman at the rate of three shillings per day. Mr. Imoudu immediately got himself actively involved with the Nigerian Railway Workers Union, taking the initiative in organizing meetings, raising funds and encouraging others.  Within a short time he established himself as a leader and he carried out the three-fold duty of president, secretary and treasurer of the ‘RWU’.

In the late 1930s and early forties, labour movement in Nigeria was in its infancy.  The British Colonial government paid meager wages to the Nigeria workers, who themselves lacked the will and courage to protest against their poor working conditions.  It was not until the mid – 40s that the Messiah emerged.  He came in the person of a young man with very modest education, employed in the Nigeria Railway, as an apprentice turner and journeyman.

This young man, with such a lowly job, was destined to raise labour from its debased level to position of reckoning.  He is no other than Mr. Michael A. O Imoudu (now pa Imoudu) who later, deservedly, earned the description “Nigeria Labour Leader number One”.  For indeed, Mr. Imoudu approached the political, social and labour problems affecting all daily wage earners, in such fearless manner that he has been described as “militaristic as Napoleon” as wise as Solomon, as patriotic as Caesar and as impetuous as the Apostle St. Peter.

Mr. Michael Imoudu became the inspiration to all workers not only at the Nigerian railways, but throughout the country and many trade unions sprang up.  Strike action, as a veritable instrument of negotiation came into full play when in June 1945, Mr. Michael Imoudu led the Railway workers on strike over demand for a daily pay increase of 8 pence.

Apart from the exile to Auchi, Pa Imoudu was incarcerated a number of times, causing discomfort and hardship to his family.

Pa Imoudu was also in active politics.  He was in NCNC with the late Herbert Macaulay and the late Dr. Nnamdi Azikiwe.

Pa Imoudu was a philanthropic to the core.  In his determination to spread the good life to all and sundry, he organized scholarship for Nigeria youths in the USSR, China and East Germany.

In recognition and appreciation of his activities, a house and a car was presented to him on the occasion of his eightieth birthday by Chief Obafemi Awolowo.  Unfortunately there is currently a controversy over the house.

Pa Michael Imoudu is now retired and lives in Oro in his house built for him by the Railway Worker’s Union.  Apart from this, nothing else has been done to immortalize this great Nigeria or to make his old age a more pleasant and comfortable one.

Pa Michael A.O. Imoudu, Nigeria Labour Leader No. 1; Father of Trade Unionism in Nigeria, holder of an Honorary Degree of the University of Ife, a champion of the course of the common man. A role model in its totality.