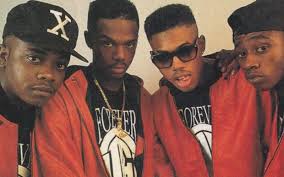 Jodeci is an American group comprised of two sets of brothers—Cedric and Joel Hailey (also known as K-Ci and JoJo) and Donald and Dalvin Degrate (also known as DeVante Swing and Mr. Dalvin). The group was formed in Charlotte, North Carolina in 1990, at the height of the New Jack Swing music season.

Their debut album, Forever My Lady, was released in 1991, featured upbeat New Jack Swing and mellow slow grooves and went multi-platinum. The boys were teenagers at the time and if you look at their videos from that album, this is evident.

Forever My Lady was followed up with the album Diary of a Mad Band in 1993, which featured the distinctive vocal sound that Jodeci had now become known for, more explicit lyrics, rapper Redman and the album debuts of Missy Elliott (Wont Waste You and Sweaty) and Timbaland (In the Meanwhile). By then the boys were young men and had experience of the trappings of success.

Jodeci’s third album, The Show, The After Party, The Hotel, was themed around the title and precisely what happens at each of those places. It was released in 1995 and virtually every person who was in their 20’s and 30’s between 1991 and 1995 will have a copy of one, two or all three albums.

After a recording hiatus of 10 years (during which K-Ci and JoJo recorded without Mr Dalvin and Devante Swing), Jodeci released the greatest hits compilation album Back to the Future: The Very Best of Jodeci, which featured many remixes of their songs.

Jodeci were once known as the “bad boys of R&B,” notable particularly because they were actually boys at the time, breaking out as teenagers in 1991 with their debut album and its title ballad, “Forever My Lady.” Natives of North Carolina, they were discovered by Heavy D, who overheard their demo when an A&R at Uptown was in the process of passing on them. Heavy D introduced Jodeci to Uptown founder Andre Harrell, who signed them after they sang in his office, and handed them off to his then-protégé Puff Daddy, who outfitted the group in dark shades and coordinating leather ensembles. The look, along with the streetwise soul found in songs like “Cry 4 U” and “Feenin” (as well as a few run-ins with the law) made them the antithesis to good-guy personas of then-peaking R&B superstars Boyz II Men.

As a group, Jodeci would go on to release three critically-acclaimed album in the ’90s, before disappearing from the limelight. K-Ci and JoJo splintered off as a duo in 1997, producing hit single “All My Life”and, eventually, five albums, but adoring fans never let go of their Jodeci obsession. And some 20 years after their vanishing, artists from Raheem DeVaughn to Justin Bieber continue to express a deep admiration. Drake’s tapped old Jodeci songs for samples on more than one occasion. In March 2015, the group released The Past, The Present, The Future, the first Jodeci album in two decades.

“Jodeci, as many records as we’ve sold, we’ve never been invited to the Grammys. Is it because we’re too black or what?” —Mr. Dalvin