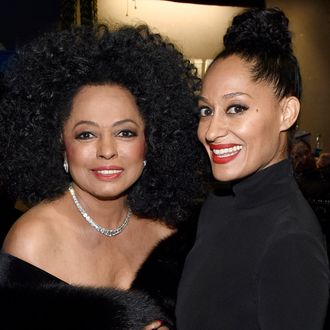 Diana Ross began singing with friends as a teenager, and eventually formed the groundbreaking 1960s trio the Supremes, going on to have hits like “Come See About Me” and “You Can’t Hurry Love.” Ross left for a solo career in 1969, later reaching No. 1 with hits like “Ain’t No Mountain High Enough” and “Love Hangover.” She starred in the films Mahogany and Lady Sings the Blues as well, earning an Oscar nomination for the latter. Despite personal and professional ups and downs, Ross has withstood the test of time as a performer with a career that spans more than four decades.

Early Life and The Supremes

Ross was born on March 26, 1944, in Detroit, Michigan. Developing a reputation as an accomplished performer, Ross began singing in the group the Primettes with friends Mary Wilson, Florence Ballard and Barbara Martin as a teenager. Martin eventually dropped out, but the remaining members of the group went on to become the internationally successful 1960s R&B and pop trio the Supremes (later named Diana Ross and the Supremes).

Ross left the Supremes for a solo career in 1969 and continued to be a musical mainstay the following year with the Top 20 “Reach Out and Touch Somebody’s Hand” and the No. 1 “Ain’t No Mountain High Enough.”

Movies: From ‘Lady Sings the Blues’ to ‘The Wiz’

In 1972, she branched out into acting and starred in the Billie Holiday biopic Lady Sings the Blues. While the film received somewhat mixed reviews, Ross’s performance garnered her an Academy Award nomination for Best Actress. The Blues soundtrack was a huge success and helped spurn new interest in Holiday as well. Ross went on to star in the films Mahogany (1975), co-starring Billy Dee Williams and Anthony Perkins, and The Wiz (1978).

The next decade started out on a strong note for Ross with the Nile Rodgers-produced, platinum-selling album Diana (1980), featuring the No. 1 hit “Upside Down” as well as the Top 5 track “I’m Coming Out.” She had another Top 10 single with “It’s My Turn” and then reached No. 1 again, this time with Lionel Richie on the 1981 duet “Endless Love,” from the film of the same name.

On her new record label RCA, Ross released the albums Why Do Fools Fall in Love (1981), which offered two more Top 10 hits, and Silk Electric (1982), which had the Top 10 single “Muscles,” written by Michael Jackson. Ross’s sales gradually faltered, but she continued to record and perform. Returning to Motown Records near the end of the 1980s, she released the albums Workin’ Overtime (1989) and The Force Behind the Power (1991), the latter having significant international success with its singles.

Albums put forth by Ross in the new millennium included Blue (2006), a jazz standards set taken from Motown’s archives, and I Love You (2007), a collection of mostly pop covers.

In the 1990s, Ross made several appearances on the small screen. She starred in the 1994 television movie Out of Darkness, playing a woman with schizophrenia. Ross then took on lighter fare with Double Platinum (1999), starring as a famous singer who had abandoned her child to pursue her career. Well-known pop performer Brandy played her daughter. Some of the songs from the project were featured on Ross’s 1999 album, Every Day Is a New Day.

Ross has also experienced personal difficulties. She got into a dispute with a security guard in 1999 at London’s Heathrow Airport, and as a result was arrested and detained for four hours before being released. In late 2002, she was arrested for driving under the influence in Tucson, Arizona, for which she later was briefly sentenced to jail.

In 2000, Ross launched a Supremes tour, which was highly criticized for excluding original member Wilson and later addition Cindy Birdsong, with there being talks of financial disputes between Ross’ and Wilson’s camps. After experiencing low attendance, the tour was canceled following a short run.

In 2007, Ross suffered a great personal loss. Her father, Fred, died in November of that year. “He touched many lives and he will be truly missed. I loved him very much,” Diana Ross said in a statement. On tour at the time, she returned home to Detroit to be with her family.

Despite her personal and professional ups and downs, Ross has withstood the test of time as a performer with a career that spans more than four decades. She has won several major awards, including a Golden Globe, a Tony and several American Music Awards. Ross was inducted into the Rock and Roll Hall of Fame in 1988 as part of the Supremes.

Ross was awarded for her hard work again in 2007 when she was presented with Black Entertainment Television’s Lifetime Achievement Award. Also that year, a few weeks after her father’s death, Ross was honored by the Kennedy Center for her contributions to the arts. Vocalist Smokey Robinson and actor Terrence Howard were on hand to provide tributes to the superstar, and Ciara, Vanessa Williams and Jordin Sparks paid homage to Ross in song. In 2009, Ross jumped back into the limelight when it was revealed that pop icon Michael Jackson had requested the diva as an alternate guardian for his children.

Ross has been married twice: In 1971 she wed music business manager Robert Ellis Silberstein. After their divorce, she was married to Norwegian tycoon Arne Næss Jr. from 1986 to 1999. The legendary singer is the mother of five children: Rhonda (whom Ross had with Gordy Jr.), Tracee (of Girlfriends and Black-ish fame), Chudney, Ross and Evan.