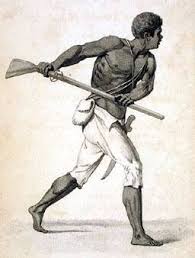 The German Coast Uprising of 1811 under the leadership of Charles Deslondes (1780 -15 January 1811) has evaded the attention of most historians. It is unclear if Deslondes was a free man of color born in Saint-Domingue and was part of the large-scale 1809 immigration to Louisiana from that colony after the Haitian Revolution (1891-1804). An unpublished work by scholar Gwendolyn Midlo Hall suggests, however, that Deslondes was a Louisiana-born enslaved man of African descent.

Whatever his origins, it is clear that in 1811, Charles Deslondes was the leader of the revolt known as the German Coast Uprising on the eastern bank of the Mississippi River. On the evening of 8 January 1811, at the age of thirty-one, Deslondes led a band of rebels downriver on River Road. They began in Norco and continued through the parishes of St. Charles and St. John the Baptist in Louisiana, approximately forty miles from the city of New Orleans. At the beginning of the nineteenth century, the region was part of the larger Territory of Orleans. In 1804, the Territory of Orleans was all of the land of the Louisiana Purchase south of the 33rd parallel. Because of its initial settlement by a small enclave of Germans, locals dubbed the province “The German Coast.” The historian Eugene D. Genovese estimated that Deslondes, inspired by the Haitian Revolution, led between three hundred and five hundred enslaved in rebellion.

Deslondes was a slave driver at the Woodland Plantation owned by Manuel Andry, in east-bank St. John Parish, Louisiana. Witnesses stated that Deslondes united the enslaved on his plantation with runaways who formed a maroon society in the nearby swamps. The rebellion also occurred during harvest, when slave owners in the South often gave enslaved more free time. This brief period of relative autonomy for the enslaved is believed to have provided Deslondes an opportunity to organize.

During the unrest, Andry was attacked with an ax by those he had enslaved. Andry’s son and his head planter, Jean Francois Trepagnier, died when confronting the mutinous laborers who had been forced to work for him. Deslondes then had the enslaved pool valuables from the plantation including arms, alcohol, and work animals.

Although the enslaved under Deslondes’s leadership possessed very few firearms, they engaged in combat with the local militia led by General Wade Hampton I (1752–1835), a plantation owner, three days after the rebellion began. Hampton had responded to a call from William C. C. Claiborne, the governor of the Territory of Orleans, to suppress the revolt. A second brigade from Baton Rouge, under the command of Major Homer Virgil Milton, was also roused to combat the enslaved. The two militias merged the following morning, 11 January 1811, near Francois Bernard Bernoudi’s plantation. The enslaved fought with pikes, hoes, and axes. They carried banners, marched to the beat of drums, and were broken into subunits that each had individual leaders on horseback. The enslaved wreaked havoc on the region, set plantations on fire as they marched towards New Orleans, and recruited additional enslaved, while white residents fled to the city of New Orleans or the backwoods nearer their plantations. At the end of two days’ fighting the militias had largely quelled the rebellion and captured Deslondes and other rebels. Some estimates from white officials and journalists at the time claimed that sixty-six rebels were killed, with a further sixteen arrested and seventeen missing, though that number may have been higher.

Beginning on 13 January 1811, a two-day tribunal was held at the Destrehan Plantation under the jurisdiction of St. Charles Parish judge Pierre Bauchet St. Martin to determine what should be done with the remaining enslaved. As the enslaved rebels were not equipped with firearms, the militia had killed at least sixty of them, and wounded many more. The tribunal sentenced sixteen of the rebellion leaders for execution. The tribunal also decapitated them and displayed their heads along the river.

Deslondes was executed on 15 January. His body was mutilated, dismembered, and put on public display as a warning against other attempts at enslaved uprisings.

The substantial number of former and current enslaved who witnessed the success of the Saint-Domingue slave revolt undoubtedly posed a constant threat to the region. Newspapers across the country chronicled the event in gory details. However, the national historical memory of Charles Deslondes and the German Coast Uprising pales in comparison to the much smaller revolt known as NAT TURNER’s Rebellion that took place in Virginia in 1831. This is most likely because Louisiana, at the time, was a very recent annexation into the United States and therefore still seen as untamed territory where violence and lawlessness could be anticipated.