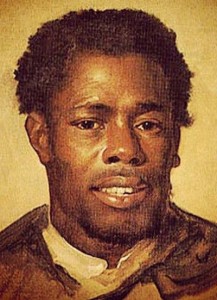 Nathaniel Turner was a Virginian slave from Southampton County who led maybe the only ‘real’ slave revolt in the United States, in 1831. Viewed as a prophetic hero by some and a psychotic murderer by others, he stands out as a brutal reminder of the kind of backlash than can explode from what I call physical and psychological enslavement and atrophy.

As a youth I read his controversial biography ‘The Confessions of Nat Turner’ and am still saddened and enraged by what happened nearly 200 years ago.
Said to be deeply religious, intuitive and literate, Turner experienced visions and believed divine voices, in 1825, were foretelling a bloody war between Black and White spirits, revealing that “the Serpent was loosened … and that I should take it on and fight …” He became a preacher who, like biblical Moses, claimed he’d been chosen by God to lead slaves out of bondage, and reportedly took a solar eclipse in February 1831 as a sign that the time had come to rise up.

On August 21st  he gathered some enslaved Africans together and began a massacre of over 50 White men, women and children, starting with the Travis family which had owned him. From there he travelled house to house, killing Whites, freeing slaves and securing arms, farm tools, and horses before continuing his onslaught. He eventually ‘enlisted’ about 70 enslaved and free Blacks. Knives, hatchets, axes and farm implements were the tools of execution. It was reported that he spared a few homes where poor Whites lived because ‘they thought no better of themselves than they did of negros.’

Turner and his men hoped to reach the county seat, Jerusalem, and take over the armory there, but the revolt ended two days later when they were intercepted by a group of armed Whites and Turner fled into the woods. He stayed there several weeks, until his capture on November 30th. Turner allegedly confessed to the crime of ‘conspiring to rebel and make insurrection’. He was convicted, sentenced to death, and hanged one week later. His body was then flayed, beheaded and quartered.

The state executed 56 Blacks suspected of involvement in the uprising. Another 100 to 200 were killed by enraged mobs and militias in the aftermath of the revolt. Many of them had nothing to do with the uprising. The incident struck fear into the hearts of Southerners and short-circuited the emancipation movement in that region. It however galvanized the movement in the North. On January 1st, 1863, President Abraham Lincoln signed the emancipation proclamation abolishing slavery, 30 years after it had happened in British Guiana.