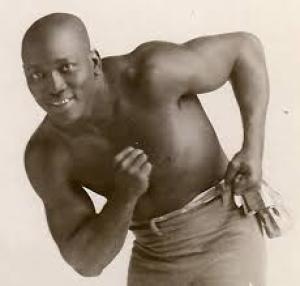 In 1908 Jack Johnson became the world’s first Black heavyweight Champion of the world. He was notorious in every way – dating white women, fighting white men to gain the championship – all of which made him ‘Enemy No. 1’ with the authorities, the white American population, as well as the Black population.

So how did he become so unpopular with so many yet popular with everybody all at the same time? Come and hear his story – it’s not all about boxing!

Join the Zoom Meeting on Monday 26 October at 7pm

CHERRY NATURAL (JAMAICA) SPOKEN WORD
Cherry Natural considers herself as a feminist dub poet or activist, and her sources of inspiration include the late Jamaican poet Louise Bennett. Louise Bennett is well-known as the first Caribbean poet who used Creole or patois consistently and to great effect in her ballads, and who relentlessly stood up for the people's language as opposed to standard English which was then considered as the only passport to social elevation.
Previous post 23.10.2020 – QUIZ: So You Think You know About Black History, online event
Next post 27.10.2020: Virtual Black History Tour of the British Museum, online event