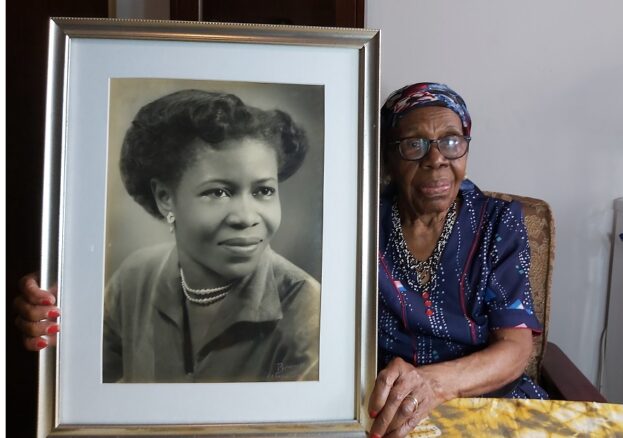 Born into a well to do family – her father worked in the Treasury department of the then British colony of Gold Coast, where his position was that normally reserved for Europeans. Such positions was referred to as “European appointment”. Oh yes, even though it’s not spoken about much, there was colour bar and class bar within the British colonies.

Whilst it was unusual at the time for most girls to have secondary education, Mummy did not only complete her secondary schooling with a School Certificate (equivalent to GCSE), but went on to teach at Accra High School, which was founded by a Sierra Leonean named Rev. JT Roberts. He was one of a number of Sierra Leoneans to establish schools in the Gold Coast.

Teaching however was a temporary job, whilst she waited for arrangements to be made by her father for her to travel to the UK to study nursing. The profession was decided by her father, who also got one son to study medicine at Leeds University and another son to study law at Oxford University.

Incidentally, although she was a privately-funded student, she still had to go to the Castle, the seat of the colonial government in Accra, to sign a bond confirming that she would return upon completion of her training.

Mummy recalls arriving at Dover in August 1947. Although it was supposed to be summer, she found the weather cold. Her boat trip started from Ghana, but because of some unexplained post-war difficulties, she had to travel to Gambia to board the ship that brought her to the UK. She was put in the charge of the Ghanaian barrister and later the first Speaker of the Gold Coast Legislative Assembly Sir Emmanuel Quist and his wife Lady Quist.

On arrival in London, Mummy was taken by a British Council officer to the Colonial Hostel in Collingham Gardens, near Earl’s Court – the British Council in those days was very particular about which part of London it housed its colonial guests. In less than a fortnight, she moved to Barnet Hospital in north London, where she began her nursing training.

Unfortunately this hospital was rather small, without training facilities. So after several weeks of daily bussing to a bigger hospital for training, Mummy and a Sierra Leone fellow training nurse, made private arrangements to continue their training in bigger hospitals.

Mummy was accepted at Central Middlesex Hospital in Harlesden, north-west London, where after the preliminary 3 month “observation” period, she was accepted for State Registered Nurse training, which she successfully completed in 3 years.

Although it’s often been said that Africans, particularly those from the Caribbean, were routinely funnelled into State Enrolled Nurse (SEN) courses, which was not recognised outside Britain, Mummy does not recall meeting any SEN students during her training.

With her SRN qualification, Mummy says “I could have stayed there forever. But I knew I was to return home sometime, and I wanted to do something else in nursing.” So she moved to South London Hospital For Women And Children to study midwifery, which was covered in two parts – one was mainly theory and the other practicals. She completed the latter at Kingsbury Hospital in north London, whereupon she qualified as a State Certified Midwife.

A smile cuts across her face as she recalls a mischievous ambition of a fellow trainee. The sign of the hospital’s name had the “o” in Women missing. So Mummy recalls “the greatest ambition” of this trainee midwife was to climb up and remove the “W” in Women, to have the sign read South London Hospital For Men And Children, and stand back and watch the pandemonium that was likely to ensue.

Mummy went on to study Health Visiting at Battersea Polytechnic, which is where that she met a Sierra Leonean fellow trainee, Adeline Lee, who was to become a long-life friend until her death.

So what does she recall of the Empire Windrush’s arrival from the Caribbean in 1948? It would surprise readers of this magazine, who no doubt are aware of the ubiquitous coverage of that ship’s one trip from the Caribbean, that it passed Mummy by. She doesn’t even recall the Caribbean nurses mentioning it at the time.

“It was interesting when,” decades later “people told me about this ship… We never really heard anything. I was surprised to hear such a thing, and none of us knew about it.”

Following the Windrush, there’s supposed to have been an “influx” of African Caribbean people coming to train as nurses. What does she recall? “I wouldn’t say ‘influx’. There were girls coming to do nursing,” she says. But adds: “Interestingly enough, either they didn’t like it, or, after the preliminary period of three months, they just left. They were not there any more.”

One of the things she particularly remembers from engaging with girls from the Caribbean was that after years of maintaining a natural hair style, they introduced her to straightening her hair “to make it easy to comb, and easy to keep.”

There is one more hirsute story Mummy recalls. It was a time when she was with a group of African Caribbean nurses were having their hair done in someone’s house, as there were no African specialist hair salon then. These nurses were talking disparagingly about the non-chemicalised hairstyles of some of the continental African nurses.

So Mummy asked them why they were talking about their fellow nurses in that way? Their response was why was she bothered. It was then that she told them that she was from Africa. Perhaps she speculates, because of her fair complexion, she says: “They hadn’t realised all this time that I wasn’t a West Indian, I mean, a Caribbean girl.”

Mummy was training at Central Middlesex Hospital when the NHS (National Health Service) was launched in July 1948. She says the doctors were initially not keen on this development, and so to get them on side, they were allowed to have some private patients treated within the NHS. Also, unlike before, when the doctors wielded a lot of power, after the introduction of the NHS, the hospital management had increased powers over their affairs.

Recreation was often going to the cinema, which one could stay in for hours, if one chose to watch repetition of the same film. She remembers coming out of the cinema one day, and everywhere was covered by smog. Visibility was so bad that the bus conductor had to go on foot using a torchlight to direct the bus driver!

Another form of recreation was window shopping. She recalls one incident that has a lasting memory. One day she and a group of girls from west Africa and the Caribbean went window shopping in Oxford Street. They ended up taking photos in a photographic studio. The following week when they went to collect their photos, she was so surprised to see her photo displayed in the shop window. The enlarged version is displayed in her house at La, and that’s the portrait she’s holding in the accompanying photograph.

Mummy was a bit of an activist in her youth. She would challenge the negative spin on Africa portrayed in talks or films provided by the Colonial Office or British Council. The crisis in Kenya at the time was one of the colonial issues she and her friends expressed solidarity with by supporting the few Kenyan students around.

It was no doubt her ability to speak up and to get her nursing friends to attend political type meetings that led to her being elected secretary of the Gold Coast Students Union. The one elected President was a socialist-leaning statistics and mathematics student, KB Asante, who had come to London from Durham University.

They would end up marrying in 1958, and having two sons and two daughters. Mummy went on to have a long career as a senior public health practitioner in Ghana. Her husband had a distinguished career as an aide to President Kwame Nkrumah and his diplomatic service included becoming Ghana’s High Commissioner to the UK and Ireland. Their marriage lasted 60 years, until the death of her husband in 2018.

Dzagbele Matilda Asante is still somewhat involved in the health service – her compound is used for the local weekly health meetings for mothers with young children.