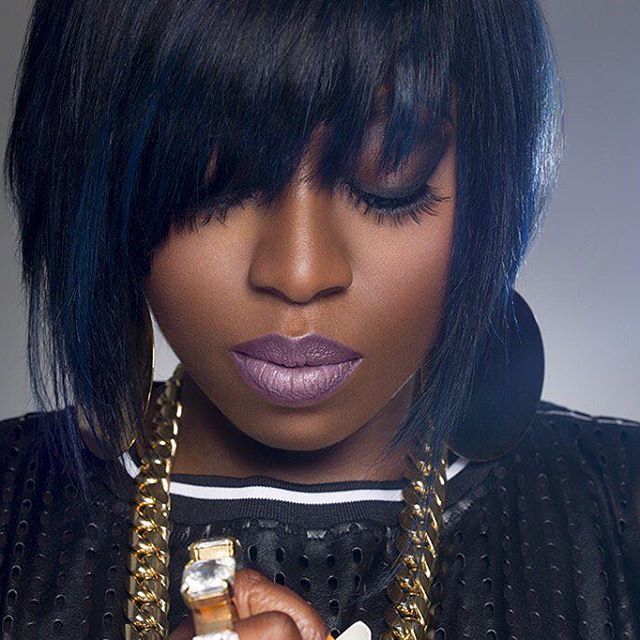 Rapper, producer and music video aficionado Missy “Misdemeanour” Elliott was born Melissa Arnette Elliott on July 1, 1971.  The information that follows is taken from her website.

MISSY ELLIOTT IS A LIVING ICON. FOR THIRTY YEARS, SHE’S BEEN DIRECTING THE GLOBAL SOUNDSCAPE, VISUALLY REINVENTING HERSELF AND REDEFINING POP MUSIC.

MISSY’S CAREER IS MULTIFACETED, AS SHE’S CHARTED NEW CREATIVE TERRITORY THROUGH SONGWRITING, RAPPING, SINGING, AND PRODUCING, WITH STYLE AND GRACE. HER INFLUENCE IS BROAD – ELLIOTT HAS INSPIRED OR COLLABORATED WITH A NUMBER OF HEAVY HITTERS, INCLUDING JANET JACKSON, MARIAH CAREY, BEYONCÉ, AND THE LATE WHITNEY HOUSTON. NO MATTER THE TIME, HER MUSIC AND VIDEOS ARE ALWAYS RELEVANT. MISSY IS A CROSS-GENERATIONAL STAR.

“The Rain (Supa Dupa Fly)” was the debut collaboration between Harold “Hype” Williams and Missy Elliott, with costume design by June Ambrose. Her oft-replicated inflatable patent leather and vinyl suit paired with archival Alain Mikli shades shared long glimpses into the future. At this point, the world was deathly afraid of the 2000s. People wondered how technology would morph, how the government would handle swift changes, and what a new Earth would look and feel like. Little did they know, all they had to do was look at Missy Elliott’s videos to find the answers. “The Rain”, and the album Supa Dupa Fly, were both nominated for Grammy Awards in 1998.

Elliott’s “Beep Me 911”, which came out in 1998, was a dollhouse-inspired take on love in the then-impending digital age. Directed by Earle Sebastian, the video showcased Missy’s brand of feminism within romance, which demanded communication and respect in the midst of vulnerability. The clip also displayed her now-iconic dance technique, equal parts controlled and sporadic. As genius as it was and remains, it was merely a taste of what was to come.

Missy Elliott’s next album, Da Real World, was gritty and reflective of the artist’s duality. On the set of the “She’s A Bitch” video, she said “Each time I gotta come a little different. And this [is] my first video from my second album, so I had to come different.” And she did. Creating art at the intersection of Third-wave feminism and Hip-Hop’s infamous misogyny, Missy reclaimed the word “bitch” and aligned it with strength and inner knowing. The Hype Williams-directed video remains one of the most expensive videos in history, and the LP spawned other singles, like “All In My Grill” and the “Hot Boyz” remix, which spent a record-setting nearly 4 months at Number 1 on the Hot Rap Singles Chart. Da Real World was her second platinum album and proof that Missy was a permanent fixture in Hip-Hop.

In 2001, Elliott produced a thumping, cowbell-accented rework of Labelle’s 1974 hit, “Lady Marmalade”. Lil’ Kim, Christina Aguilera, Mya, and P!nk were tapped for the chart-topping single that won a Grammy in 2002 for Best Pop Collaboration with Vocals. The video also won multiple MTV Video Music Awards in 2001 for Best Video from a Film and Video of the Year (plus a Japanese iteration of the MTV VMA Award), as well as three VH1 Awards, and two TMF Awards.

She participated in the 1997 remix “Not Tonight”, featuring a slew of talented, popular women in rap, including Left Eye of TLC, Lil’ Kim, Angie Martinez, and Da Brat. The song won a Soul Train Lady of Soul Award for Best Video by a Female in 1998.

Missy performed “Not Tonight” on the main stage at 1998’s Lilith Fair, a music festival that exclusively featured women and women-fronted bands.

Her collaborative work with Aaliyah, and Timbaland, her long-time production partner and closest friend, stands out in history. “[I]t was a different sound”, Elliott said to Associated Press in 2018. Elliott’s street smart, yet sweet, lyrics and Timbaland’s rollicking, ticking instrumentals helped shape Aaliyah’s iconic sound. R&B hadn’t experienced anything quite like the trifecta. The second single from Aaliyah’s 1996 sophomore project, One In A Million, “If Your Girl Only Knew”, (written by both Elliott and Timbaland) shot to Number 1 on Billboard’s Hot R&B/Hip-Hop Songs chart.

Missy unveiled her third project, Miss E… So Addictive in May 2001. Her platinum-certified, third album exhibited her in peak form – lyrically adept, cheeky, and self-actualized. Singles, including “Get Ur Freak On” and “One Minute Man”, were sex positive and danceable. The video for the latter featured cameos by black cultural figures, like Ludacris, Trina, Ginuwine, Shar Jackson, Timbaland, and more, and also promoted safe sex. “Get Ur Freak On” won a Grammy for Best Rap Solo Performance, an ASCAP Rhythm and Soul Award and an ASCAP Pop Music Award, a VIVA Comet Media Award for Best International Video, and a Soul Train Award for Best R&B/Soul or Rap Music Video. “Scream a.k.a. Itchin’” won a Grammy for Best Female Rap Solo Performance in 2003.

ELLIOTT HAS WON EVERY ASCAP RHYTHM & SOUL AWARD SHE HAS BEEN NOMINATED FOR, SPANNING FROM 1998 TO 2008.

Under Construction, which came just one year after its predecessor, was home to hit “Work It”. and Missy broke the internet 15 years after the track was released when fans discovered that her lyrics were literally reversed for the chorus. The catchy cut found new ears again during the summer of 2018, when a clip of Mary Halsey performing it went viral. Missy and Mary performed it together on the Ellen show soon after. “Work It” won three ASCAP awards, a Billboard award for Hot Rap Track, a Grammy for Best Female Rap Solo Performance, an International Dance Music Award, two MTV VMA’s, and NAACP Award, a Soul Train award, a Soul Train Lady of Soul award, and a Vibe Award.

This Is Not A Test and The Cookbook released in 2003 and 2005, respectively. Missy’s love of old school Hip-Hop was on full display during the This Is Not A Test era – in honor of the rappers of the mid-to-late 1980’s, she wore bedazzled Adidas tracksuits, complete with one cropped, or embellished pant leg, matching hats, sneakers, and gleaming rope chains. The lyricist collaborated with Adidas between albums on the “Respect M.E.” clothing line, cementing her status as a fashion-forward thinking diva.
In 2004, Elliott worked with Ciara in the beginning stages of her career, assisting the young starlet on “1, 2 Step”, which claimed a Number 2 spot on the US Billboard Hot 100 and won her a Grammy for her verse. They also worked together on “Lose Control”, a single from The Cookbook that won a Grammy for Best Short Form Music Video.

Missy Elliott has has been busy working on soundtrack material (“Ching-a-Ling” and “Shake Your Pom Pom”), loose singles like “I’m Better”, as well as material with other established and rising artists. Elliott appeared on Keyshia Cole’s “Let It Go” with longtime friend Lil’ Kim, and regularly collaborated with Fantasia, Jazmine Sullivan and Monica.

Though she is most famous for her solo work, Missy has lent vocals, production or her songwriting prowess to Tweet, 702, Total, Mary J. Blige, J. Cole and more. Elliott was given awards for her work as a visionary at BET’s Black Girls Rock! Awards in both 2007 and 2010.

In 2015, Katy Perry invited Elliott to appear with her during her Super Bowl halftime show for an upbeat string of some of the rapper’s biggest hits. The performance is still the most-watched halftime show in history. She was granted the Innovator Award at the Billboard Women in Music Awards a few months later. The next year, the rap icon was lauded at the VH1 Hip Hop Honors and appeared in Marc Jacobs’ Fall 2016 campaign.

MISSY ELLIOTT HAS DEFINED HERSELF AS AVANT-GARDE, AND ANYONE WHO HAS FOLLOWED HER DECADES-LONG CAREER WOULD DEEM IT A BEFITTING DESCRIPTOR. SHE HAS SHOWN THE WORLD HOW EMPOWERING CREATIVITY CAN BE. FROM THE FIRST TIME WE SAW HER DANCING AND RHYMING WE KNEW THAT SHE WAS DESTINED TO BE A SUPERSTAR – AND DESTINY HAS FULFILLED ITSELF MANY TIMES OVER.

MISSY ELLIOTT HAS INSPIRED PEOPLE ACROSS A PLETHORA OF FIELDS, AND HER WORK IS NOWHERE NEAR DONE. JUST WHEN YOU THINK SHE CAN’T TOP HERSELF, SHE DOES IT, WITH MASTERFUL FLAIR AND A GRIN.