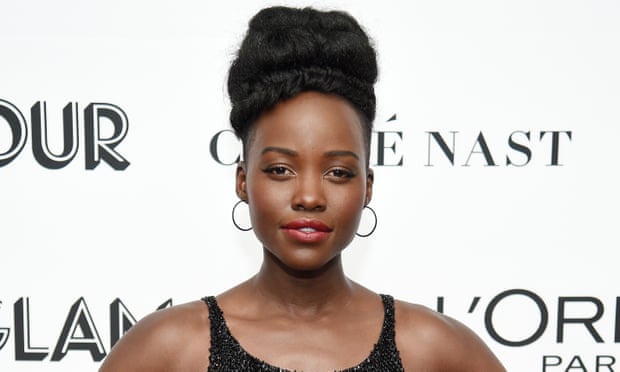 “Privacy is a commodity that is hard to come by”

Lupita Amondi Nyong’o was born on 1 March in Mexico City in 1983. Her father, Peter Anyang’ Nyong’o, is a prominent Kenyan politician, and mother, Dorothy Ogada Nyong’o, had emigrated to Mexico in 1980, from Kenya. The family moved to New York City in 1984, when Lupita was baby.

She was 16-year-old when she moved from Kenya to study in Mexico, where her parents lived when she was born. Her base for the duration of her studies was Taxco, Guerrero, where she learned Spanish at the Universidad Nacional Autónoma de México’s Learning Center for Foreigners. She says she was “excited but mainly terrified.” But she set off with courage, which is not to be mistaken for fearlessness.

“Courage is acknowledging fear and taking action in spite of it,” she says.

In 2003, she enrolled in Hampshire College, in Amherst, Massachusetts, as an international student, immersing herself in African studies. “We were really deeply investigating and exploring and analyzing a lot of sociopolitical dynamics,” she says. “My enlightenment was my education, to really recognize that these things play out in cultural and social setups. They don’t play out theoretically.” After graduating, she entered the Yale School of Drama to complete a masters degree. Then, while still at Yale, Lupita landed an audition with director Steve McQueen for a role in 12 Years a Slave.

The film was based on Solomon Northup’s real-life account of his kidnapping and enslavement on Edwin Epps’s Louisiana plantation. After a successful audition, Lupita played Patsey, a woman who was known to pick more than 500 pounds of cotton a day—twice the quota. Patsey was repeatedly raped by Epps and tortured by his jealous wife. The film’s most devastating scene depicts Epps brutalizing Patsey, after forcing Samuel Northup, played by Chiwetel Ejiofor, to whip her as well.

Speaking of her experience of being cast in 12 Years a Slave when she was still at the Yale School of Drama: “I was panicking a lot about it, certain that I would fail miserably at the role because I had no experience working on such a big film with such big people. It was bound to be the biggest challenge of my life.” She expressed her fears to her counselor, who had her imagine the worst that could happen—“I imagined forgetting my lines, being the weak link of the cast, getting fired and replaced, being blacklisted in Hollywood even before I could be on a list,” recalls Nyong’o, who says that she then “basically cried a river of all the woes that lay ahead of me” before her advisor asked, “And then what happens next?”

“I paused and gave it some serious thought,” Nyong’o says. “And then I burst out laughing and said, ‘I guess life goes on.’” The exercise taught Nyong’o the importance of good mental habits. “I felt such a relief in that moment and free enough from the demon that was my self-doubt, that I could actually go away and do the work that I needed to do to prepare for the role,” she says.

The film’s success catapulted her from unknown actress to Oscar nominee overnight, throwing her into the whirlwind of the awards campaign, a six-month round of non-stop public appearances, demanding appropriate outfits to match. ‘I was completely overwhelmed,’ she says, simply. ‘The body registers stress, whether good or bad, in the same way. So if it’s super exciting or super traumatising, your body is in equal distress. Though I would choose excitement over trauma every day.’ Lupita’s performance earned her a Best Supporting Oscar and her work as an actor has been almost constant since then.

Lupita is fully aware of her blessings in winning such a high-profile role so early in her career. ‘With the success of my first film and the accolades that came with it, I have the privilege of choice,’ she says. ‘I’m an ambassador for a beauty brand [and the face of Tiffany & Co]which gives me financial security, and I’ve been able to only say yes to things that I am actually deeply interested in.’ These include joining the biggest franchise in the business, playing the smuggler Maz Kanata in Star Wars: The Force Awakens, and playing an undercover spy in the adaptation of the Marvel comic book The Black Panther.

Her position has also given her a platform to speak out about the subjects she’s passionate about. She strives to tell the stories about Africa that were missing from her own childhood, including Eclipsed, (written by her Black Panther co-star, Danai Gurira) the first play with an all-black female cast and creative team to premiere on Broadway. She was nominated for a Tony award for the play, about Liberia’s second civil war. ‘I know being an African woman on a Hollywood platform is not something you see every day, and I feel how special that is and I respect it,’ she has said.

In a Hollywood that has traditionally been filled with actors of the Caucasian persuasion, the days when she wished she could change how she looked are long gone.

Her motto is, ‘There’s room in this world for beauty to be diverse.’

She reveals that her mother always tried to instil this in her. ‘My mother – who has never worn make-up herself – didn’t allow me to wear make-up growing up. She always said, “Your skin is beautiful the way it is.”’

In the six years since she won the Best Supporting Actress Oscar for her first film, 12 Years a Slave, she has given herself “permission to take things slow”, carefully picking the projects that allow her to make a difference. “I don’t get fulfilment from the number of zeros attached to a project,” she explains. “What I’m seduced by is the potential to shift a narrative. That is very seductive to me, having social and cultural impact.”

It feels deeply, deeply meaningful. And so exciting. I just feel so blessed to be a part of this movie that has the potential to really inform and shift our popular culture. And the fact that it’s not only fly for days but it’s also got a really interesting message and something that makes you really think. This is a movie, a superhero movie, with a protagonist and an antagonist who both have very, very valid arguments. And the antagonist, Killmonger, is so empathetic you can you can definitely see his point of view.

Wakanda is, it’s an aspirational nation. You know, films have an ability to show us where we’ve been, where we are and where we could be. And Wakanda is where we could be, where women are occupying their space in the future of a nation, they’re contributing equally and they’re allowed to realize their full potential and a woman’s power does not diminish a man’s. You know, you see Black Panther and right behind him is Okoye, the general [of the king’s bodyguards the Dora Milaje], and you know, both of them hold their power, both of them need each other and it’s really beautiful. And Nakia, his, you know, complicated situation, you know, he listens to her and the Queen Mother and Shuri, the head of technology, I mean women everywhere who are pivotal to this story.

Lupita also had a lead role in the movie Us, directed by Jordan Peele who also directed Get Out. Playing both a loving mom and a creepy, scissor-toting, probably murderous doppelgänger of the loving mom, her fellow Black Panther actor Winston Duke (who played M’Baku in BP) plays the dad and his double. She says, she “thoroughly enjoyed” the experience:

Jordan really does pay homage to the genre and to the canon of horror films. For me, it was useful to know what kind of vocabulary he’d be working from, what kind of aesthetics, what kind of style. So that was what I was taking away from the films, really. Not really acting notes per se, but the things that are going to influence the world he was creating, because the world in Us is so deeply from Jordan’s mind that in order to do my work as an actor, I really had to, like, interrogate him. My first point of research was Jordan’s mind. I had to try and get in there in as many ways as possible. That included spending a lot of time talking to him, asking questions for clarity, that sort of stuff. And then, of course, watching these films.

The first reason I signed up for this movie, one, was because Jordan Peele created it. And the minute I found out he was offering me a role I was like, “Yes! What is it?” You know? I read the script in one sitting, and by the end of the script, I realized my shoulders were so high up ’cause I was so concerned and nervous and actually quite frightened as I read it. And then, he was giving me the opportunity to play two characters. That was so exciting to me, the fact that I would get to play both sides, just the two very extremely different roles. It seemed like Christmas had come early. And then I started working on it, and I realized how taxing it is to play two characters with the preparation time it would take for me for one. So, it was quite the challenge to kind of split my mind and split my focus, ’cause I’m so used to investing in one person’s perspective. So, to do both justice is extremely tough. And then the technical challenges, being on set and basically acting with myself, was something that took a lot of sleep to get it right, which is the last thing you’re trying to do when you’re playing two characters, and a lot of focus. I had to focus quite intensely because every time I had to be fully in one character and also kind of having the out-of-body experience of taking notes for when I would play the other.

But you know, I definitely had to go to some dark, dark corners of my being to embody the one scary character. It was very intimidating to think of that character as scary or evil, you know those kinds of words I found to be debilitating. So, it was about getting beyond that because when you watch these scary movies, the evil is so ominous that it feels larger than life. To try and embody that can be quite daunting. So, it was about just really deeply investigating the character’s emotional motivation and being situated in that and allowing that to magnify the character.

The subject of race is irrelevant to the experience that this family is going through. But the fact that this family exists in this particular genre and the legacy that is horror, that is the racial statement. The subject itself, what we’re dealing with in the film, is something else. And that in itself is refreshing as well, that the experience of black people is not always in context of their blackness. At the end of the day, Jordan, by putting black people at the center of his narratives, continues to expand our perception, our understanding of such people. As much as it’s not the subject of this particular film, it still lends itself to the expansion of the paradigms in this country.

For her next project Lupita was scheduled to produce, and star in, an adaptation of Chimamanda Ngozi Adichie’s novel Americanah. “I had never seen the African contemporary experience explored, celebrated and analysed in such a way,” she says of the impact the story had on her. “The observations she makes as a non-American black person about America are things that I had never articulated but had felt. I was just madly in love.” The script was written by Danai Gurira. Due to the Covid-19 pandemic, the film was repurposed as a mini-series for HBO but filming has been delayed due to global travel restrictions.