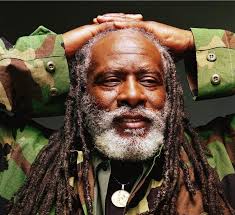 Born Winston Rodney in St. Ann, Jamaica on 1 March, 1945, Burning Spear is a music-maker, community icon, educator, spiritual uplifter; Burning Spear’s importance to culture existed before the media spotlight, and has only grown since.

For nearly four decades and more than 25 albums, he has carried the torch of the gospel of political activist Marcus Garvey, promoting self-determination and self-reliance for African descendants through lyrics and rhythms that truly deliver the messages of peace and love to all.

Not surprisingly, Burning Spear’s path in music began with a fateful encounter with Bob Marley. Both were living in the St. Ann’s parish of Jamaica. As Spear recalls,

“The way the whole thing came about is that I found myself moving along up in the hills of St. Ann’s and I ran into Bob at the same time.

And Bob was going to his farm. The man was moving with a donkey and some buckets and a fork, and cutlass and plants. We just reason man-to-man and I-man say wherein I would like to get involved in the music business. And Bob say, ‘All right, just check Studio One.'” It was there that Spear recorded his first two classic album, Burning Spear and Rocking Time.

Selected extracts from interview with unitedreggae.com:

You know, to be honest, when I first got involved, I could identify that I’d been called upon to do a work, but I never thought in terms of creating music for Jamaicans.  My creativity was an international creativity.  When I say that it is an international creativity, I mean that I had a concept of creating music for all people, not just Jamaican people.  I know that music reaches out to all different kinds of people.  Music does so many good things for so many different people all over the world.

Based upon what I used to hear about myself, other musicians would come back from the road and tell me ‘people are talking about you and your music.’  I was thinking about that when I hit the road, I would be accepted by many people.  The first time I did that was to tour Canada, in Toronto in 1974.  That first show was sold out and the place was packed.  At that time, the clubs we played were really small, but that changed of course.

From the beginning, it was a mixture.  I would come on stage and see some white faces, some other coloured faces in the audiences.  So, from the beginning, I was getting a wide exposure to different people.  For me, white or black, I don’t care.  Music is for all people.

I think what happened with recording ‘No Destroyer’ is that I put more of my experience into the tracks – as a man and as someone working in the music business – than I had before.  This is what I would say inspired I man to put this album together.  Actually a lot of things have happened.  I have seen so many reggae artists of my generation struggle, get sick and suffer because they had nobody in their corner to watch out for their interests.

I have seen so many reggae artists of my generation struggle, get sick and suffer because they had nobody in their corner to watch out for their interests

I, myself, was one of the ‘reggae slave’ artists and I started to see what was going on, so I ran away from the ‘reggae slave’ masters to start my own thing. I’ve seen it all.  I’ve seen a lot of things.  In the music business environment, a lot of things surround you.  You have to choose what you want to do.  Do you want to be a part of the material world they are encouraging you to join?  Or, do they want to be a part of me?  If I’d become a part of them, I wouldn’t be here today talking to you.  No one is perfect.  Don’t get me wrong, but I think I’ve managed to avoid a lot of the temptations that could have surrounded me and put me down.  I’ve always tried to put forward a very positive, clean image where the work I’ve done has been good work and positive work.

These are the kinds of things that I’m talking about in ‘No Destroyer’ so that people can overstand or feel what it was like.  Another thing what inspired me when I looked at reggae music was that reggae music was like an open range in which bootleggers from Vancouver to Paris could come in and steal I music.  It was time for someone to take a stand.  So, I was in a position where I had to stand up to protect my musical history and my musical culture.  It’s been my working life, I have to defend it.

There is no interference with my creativity.  It gives me more encouragement musically.  (Big laugh) All of these things we’ve been talking about have gone into inspiring me to make more music.  They have allowed me to get deeper into the concept of ‘no destroyer.’

If it’s a new beginning then you can’t carry forward the things you left behind. It’s going to interfere with you in the present if you try to do that

It’s your mind.  You develop your mind so that it can do the work of separation.  Otherwise, you won’t go nowhere.  You think you’re going forward, but you’re going backward.  There’s a lot of good things to be done moving forward!

An artist can retire from touring and from other things, but in terms of musical creativity, I don’t think you can retire from that.  I’m always going to hear and do things that are creative.  So, that remains and is never done.

As you know, we lost our son, Kevin recently and there has been so much going on, it’s only recently we have had the time to grieve.  My wife, Sonia and I are grieving people and grief needs its proper care and attention.  I can’t let other forces get in the way of what is a natural thing.  People need to respect that.  We need to respect it.  It is part of the natural thing.  Everything lives and passes.

I think every retirement person has to use their discretion and not overdo it.  Whenever I play a show, it’s not because I called a promoter.  They call me.  They have to abide by my rules.  I do these things because of the fans.