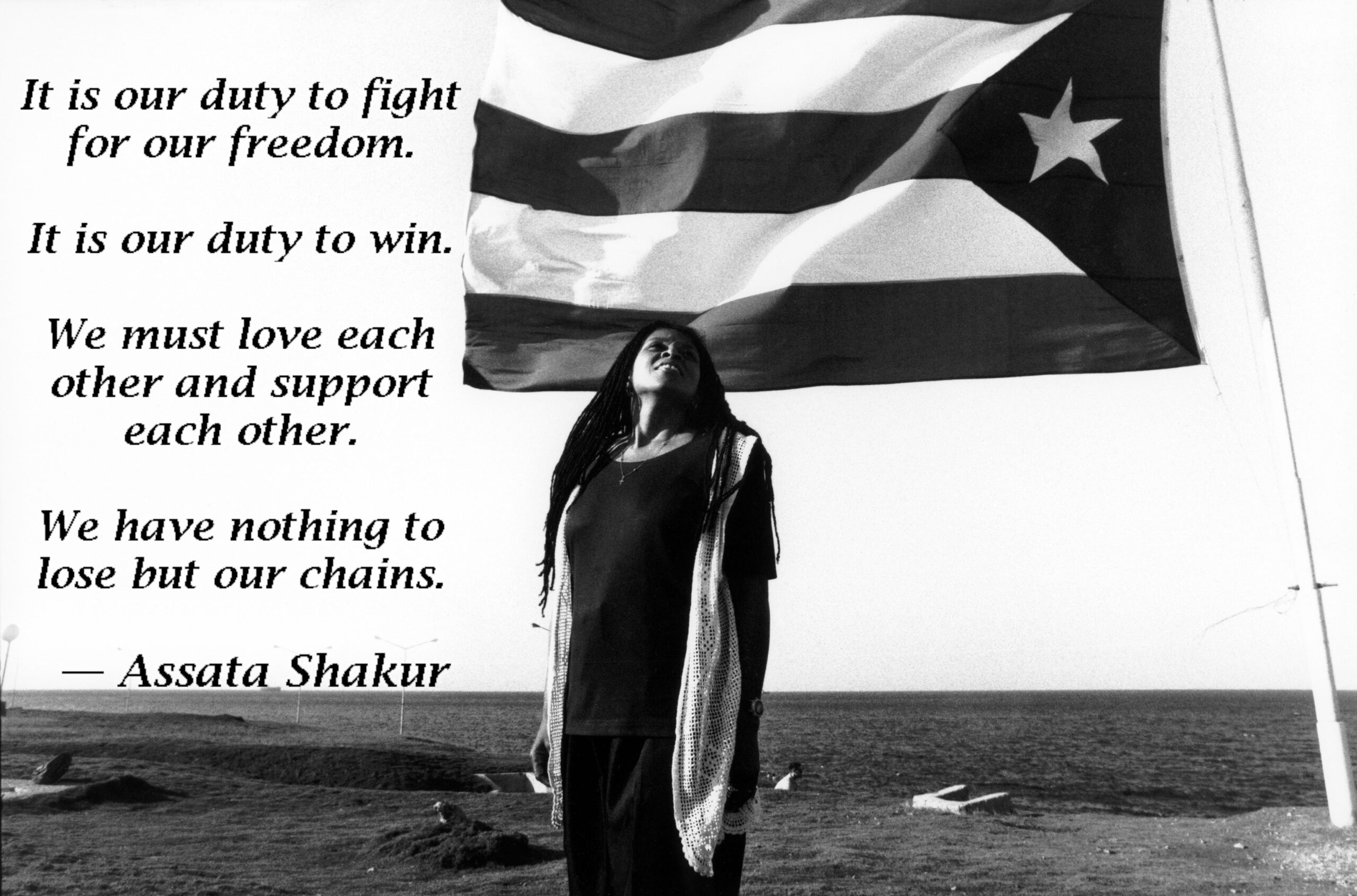 Assata: In her own words
My name is Assata (she who struggles) Olugbala (for the people) Shakur (the thankful one), and I am a 20th century escaped slave. Because of government persecution, I was left with no other choice than to flee from the political repression, racism and violence that dominate the US government’s policy towards people of color. I am an ex political prisoner, and I have been living in exile in Cuba since 1984. I have been a political activist most of my life, and although the U.S. government has done everything in its power to criminalize me, I am not a criminal, nor have I ever been one.

Political Prisoner to Exiled
On May 2, 1973 I, along with Zayd Malik Shakur and Sundiata Acoli were stopped on the New Jersey Turnpike, supposedly for a “faulty tail light.” Sundiata Acoli got out of the car to determine why we were stopped. Zayd and I remained in the car. State trooper Harper then came to the car, opened the door and began to question us. Because we were black, and riding in a car with Vermont license plates, he claimed he became “suspicious.” He then drew his gun, pointed it at us, and told us to put our hands up in the air, in front of us, where he could see them. I complied and in a split second, there was a sound that came from outside the car, there was a sudden movement, and I was shot once with my arms held up in the air, and then once again from the back.

Zayd Malik Shakur was later killed, trooper Werner Forester was killed, and even though trooper Harper admitted that he shot and killed Zayd Malik Shakur, under the New Jersey felony murder law, I was charged with killing both Zayd Malik Shakur, who was my closest friend and comrade, and charged in the death of trooper Forester. Never in my life have I felt such grief. Zayd had vowed to protect me, and to help me to get to a safe place, and it was clear that he had lost his life, trying to protect both me and Sundiata. Although he was also unarmed, and the gun that killed trooper Forester was found under Zayd’s leg, Sundiata Acoli, who was captured later, was also charged with both deaths. Neither Sundiata Acoli nor I ever received a fair trial. We were both convicted in the news media way before our trials. No news media was ever permitted to interview us, although the New Jersey police and the FBI fed stories to the press on a daily basis. In 1977, I was convicted by an all- white jury and sentenced to life plus 33 years in prison. In 1979, fearing that I would be murdered in prison, and knowing that I would never receive any justice, I was liberated from prison, aided by committed comrades who understood the depths of the injustices in my case, and who were also extremely fearful for my life.

A major lie and distortion was that we had left trooper Werner Forester on the roadside to die. The truth is that there was a major cover-up as to what happened on May 2, 1973. Trooper Harper, the same man who shot me with my arms raised in the air, testified that he returned to the State Police Headquarters which was less than 200 yards away, “To seek aid.” However, tape recordings and police reports made on May 2, 1973 prove that not only did Trooper Harper give several conflicting statements about what happened on the turnpike, but he never once mentioned the name of Werner Forester, or the fact that the incident took place right in front of the Trooper Headquarters. In an effort to hide his tracks and cover his guilt he said nothing whatsoever about Forester to his superiors or to his fellow officers. In a clear attempt to discredit me, Col. Carl Williams of the New Jersey State Police was allowed to give blow by blow distortions of my interview.

In my interview I stated that on the night of May 2, 1973 I was shot with my arms in the air, then shot again in the back. Williams stated “that is absolutely false. Our records show that she reached in her pocketbook, pulled out a nine millimeter weapon and started firing.” However, the claim that I reached into my pocketbook and pulled out a gun, while inside the car was even contested by trooper Harper. Although on three official reports, and when he testified before the grand jury he stated that he saw me take a gun out of my pocketbook, he finally admitted under cross examination that he never saw me with my hands in a pocketbook, never saw me with a weapon inside the car, and that he did not see me shoot him.

The truth is that I was examined by 3 medical specialists: (1) A Neurologist who testified that I was immediately paralyzed immediately after the being shot. (2)A Surgeon who testified that “It was absolutely anatomically necessary that both arms be in the air for Mrs. Chesimard to receive the wounds.” The same surgeon also testified that the claim by Trooper Harper that I had been crouching in a firing position when I was shot was “totally anatomically impossible.” (3) A Pathologist who testified that “There is no conceivable way that it [the bullet] could have traveled over to hit the clavicle if her arm was down.” he said “It was impossible to have that trajectory. “The prosecutors presented no medical testimony whatsoever to refute the above medical evidence. No evidence whatsoever was ever presented that I had a 9 millimeter weapon, in fact New Jersey State Police testified that the 9 millimeter weapon belonged to Zayd Malik Shakur based on a holster fitting the weapon that they was recovered from his body.

There were no fingerprints, or any other evidence whatsoever that linked me to any guns or ammunition. The results of the Neutron Activation test to determine whether or not I had fired a weapon were negative. Although Col. Williams refers to us as the “criminal element” neither Zayd, or Sundiata Acoli or I were criminals, we were political activists. I was a college student until the police kicked down my door in an effort to force me to “cooperate” with them and Sundiata Acoli was a computer expert who had worked for NASA, before he joined the Black Panther Party and was targeted by COINTELPRO.

Source: assatashakur.org. The above is an extract from the website, told in Assata’s own words. Visit the website for more.