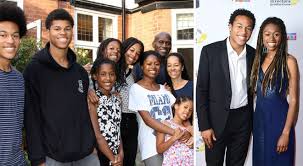 A heart-warming family affair as all seven siblings of ‘Britain’s most musical family’ (The Times) show their talents as both soloists and chamber musicians in works spanning Mozart to Eric Whitacre.

Not many musicians can claim a Royal appearance, award-winning albums and a BBC One documentary, but the Kanneh-Mason siblings are remarkable in so many ways. All gifted instrumentalists in their own rights, we relish the opportunity to hear them together live. Forming part of our live-streamed concert series, the Kanneh-Masons will appear in different combinations to take on a wide-ranging programme of their favourite music for piano and strings from the last 300 years, before coming together for a Fiddler on the Roof Medley, arranged by the siblings themselves.

As part of the stream, a conversation between the children and parents of this talented family will give us a chance to meet them and learn some of the insights behind Kadiatu Kanneh-Mason’s new book, House of Music: Raising the Kanneh-Masons.

Samuel Barber Sonata for Cello and Piano, Op 6 Mvt I

CHERRY NATURAL (JAMAICA) SPOKEN WORD
Cherry Natural considers herself as a feminist dub poet or activist, and her sources of inspiration include the late Jamaican poet Louise Bennett. Louise Bennett is well-known as the first Caribbean poet who used Creole or patois consistently and to great effect in her ballads, and who relentlessly stood up for the people's language as opposed to standard English which was then considered as the only passport to social elevation.
Previous post 29.10.2020: Nubya Garcia, live & online event, The Barbican Centre
Next post Racist responses to Marcus Rashford’s campaign for children are no surprise