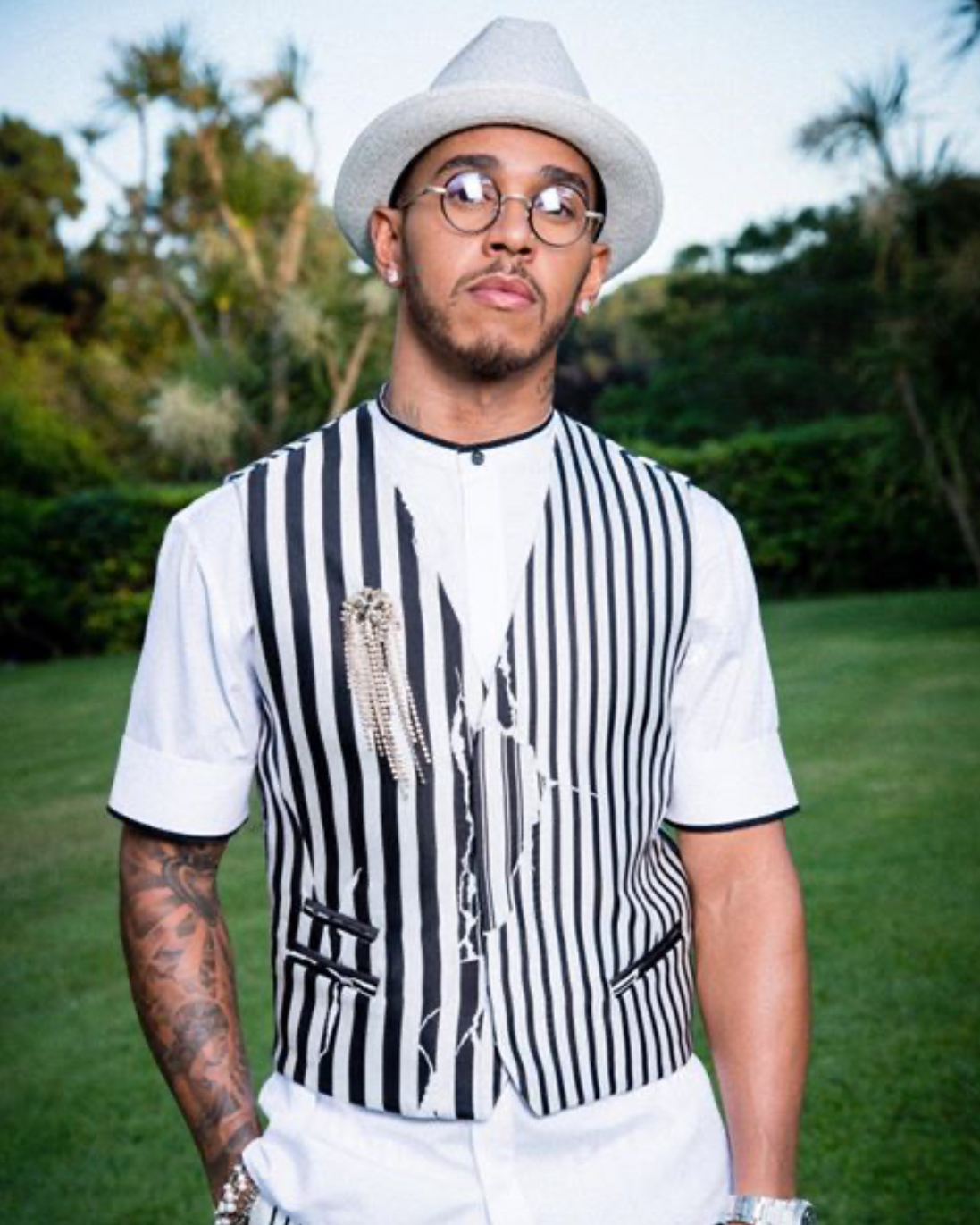 Lewis Carl David Hamilton was born on January 7, 1985 in Stevenage, Hertsfordshire to Carmen and Anthony Hamilton. He is a seven time Formula 1 motor racing champion having won in 2008 (Maclaren F1), 2014 (Mercedes AMG Petronas Motorsport F1), 2015 (Mercedes), 2017 (Mercedes), 2018 (Mercedes), 2019 (Mercedes) and 2020 (Mercedes). He is the only Black driver ever to have raced in Formula 1 and has been taunted with racial abuse throughout his career, which started in 2007 at the Australian Grand Prix. His team mate for that first season was Spanish driver, Fernando Alonso.

For Christmas 1991, Lewis’ father bought him a go-kart for Christmas when Hamilton was six. Turning seven the month after, Lewis entered into Karting with an enthusiasm and love of racing that saw him grow into an accomplished racer. Anthony could see his son’s potential and promised to support his racing career as long as he worked hard at school. As Lewis notched up wins in Karting, then Formula Renault, and GP2, winning the GP2 Championship in 2006. Anthony was right beside him. He had taken redundancy from his job as a manager and became a contractor; working up to three jobs at a time, while still being there with his son for all his races. Lewis signed with Maclaren after winning the GP2 Championship, for the 2007 season.

In February 2008, 23 year old Lewis arrived at the Circuit De Catalunya in Barcelona, Spain and was confronted by a phalanx of Spanish fans wearing ‘Afro’ wigs, blacked-up faces and t-shirts with the words, Lewis’ familly on them. In November of the same year, a website run by TBWA (part of the world’s largest advertising agency, Omnicom) was taken down after it emerged that ‘pinchalaruedadeHamilton.com’ which translates to ‘burst Hamilton’s tires,’ was an online space for racially abusing Lewis. On the website, he had been referred to as a “half-breed”. It was part of a vendetta against Lewis by the Spanish fans which started when Fernando Alonso expressed his belief that Maclaren was favouring Lewis because he, like Maclaren, were British. Fernando would eventually leave Maclaren “by mutual consent” at the end of the 2007 season and the 2008 season would see Lewis team up with British driver, Jenson Button.

The first time he won the title (the first British driver to win the title for 22 years, the last being Damon Hill in 1996), in 2008, Lewis was also the youngest ever world champion, but he was not taken to hearts of the British people in the same way that Jenson Button would be when he won the world title the following year in 2009. As journalist Joseph Harker pointed out in The Guardian, the day after Lewis bagged his second world title:

Within hours of his moment of glory yesterday, the Eurosport website had posted an article headlined: “Hamilton a worthy world champion but is he a likeable one?” This came days after a full-page Sunday Telegraph article asking, Why does Britain not love Lewis Hamilton?

In 2011, After joking that the stewards’ decisions went against him “Because he is Black”, even though he clearly referenced the comic character of Ali G, played by Sacha Baron Cohen, for whom the phrase is a punchline [https://www.youtube.com/watch?v=G91KG-B7uSk], Lewis was made to apologise. The Guardian described it as “an astonishing attack” and said that “Clearly Hamilton did not try to keep his mouth shut very hard”: https://www.theguardian.com/sport/2011/may/29/lewis-hamilton-formula-one-felipe-massa. You will note that the YouTube video has been titled, “Lewis loses his cool”, despite the fact that he is clearly laughing in the video and immediately makes reference to the Ali G punchline. The tone of the Guardian article, written by white-haired Caucasian Paul Weaver, will be one that is familiar to many Black people with its tone-policing of Lewis’ comment and its underlying message that ‘we as white people may have given you the label Black but only we are allowed to talk about your Blackness’.

“There is barely any diversity in Formula One,” he wrote on an Instagram story. “Still nothing’s changed in 11 years I’ve been here. Kids, people, there are so many jobs in this sport in which anybody, no matter their ethnicity or background, can make it and fit in. #diversity #ucandoit.”

The Express seized on the posting making a news story of it [https://www.express.co.uk/sport/f1-autosport/935433/Lewis-Hamilton-F1-news-racial-diversity-attack-Australian-Grand-Prix], headlining “Lewis Hamilton launches racial attack on F1 in social media post before Australian GP”.

The paper went on, “The message came just minutes after he told F1 title rival Sebastian Vettel that ‘blacks don’t crack’ off mic during the Australian Grand Prix press conference.” The newspaper then went on to rehash the Ali G comment from 7 years ago before betraying itself and getting to the crux of why Lewis is not liked by certain insecure and mediocre factions of British society – (because he’s a Black man with money and success) – “He is already the most successful British driver in history and will become the highest-paid British sportsman when he pens his new Mercedes deal worth a reported £40m a year”.

Compare and contrast the right-wing newspaper’s coverage with that of ESPN, regarding the same Instagram post, here: https://www.espn.com/f1/story/_/id/22868088/lewis-hamilton-calls-greater-diversity-formula-one-says-changed.

Toto Wolff, Mercedes’ Team principal, appears to have a good understanding of what Lewis has been through in terms of racism within racing and acknowledges the negative effect that it would have had on Lewis:

After the murder of George Floyd

On 31 May, 2020, having been met with silence from the F1paddock, Lewis spoke out to all those involved in Formula 1:

“I see those of you who are staying silent, some of you the biggest of stars yet you stay silent in the midst of injustice,” he wrote on Instagram. “Not a sign from anybody in my industry which of course is a white-dominated sport.

“I’m one of the only people of colour there yet I stand alone. I would have thought by now you would see why this happens and say something about it but you can’t stand alongside us. Just know I know who you are, and I see you.”

The Formula 1 season had been halted due to worldwide COVID-19 restrictions and the grounding of flights but once it resumed, Lewis has kneeled before every race and he has been joined by many others in the paddock.

Lewis’s social media bears witness to what he has to say on the subject of racism and there is too much there to put on here, so a selection of highlights follow.

Lewis raised the blood pressure of the white supremacists who veil their racist tendencies under the cloak of “politics doesn’t have any place in sports” by wearing a shirt in support of racial justice and equality.

Before the race, Lewis posed in the t-shirt for an Instagram post and said in the caption: ‘It’s been 6 months since Breonna Taylor was murdered by policemen, in her own home. Still no justice has been served. We won’t stay silent. #JusticeForBreonnaTaylor.’

Having won the Grand Prix, Lewis took to the podium in the shirt:

But Lewis has his defenders also:

On June 20, 2020, Lewis announced plans to set up a commission in his name to increase diversity in motorsport. He said he wants the Hamilton Commission to make “real, tangible and measurable change”. “Despite my success in the sport, the institutional barriers that have kept F1 highly exclusive persist,” he said in a column for the Sunday Times. “It is not enough to point to me, or to a single new black hire, as a meaningful example of progress.”

The commission, he said, would explore how motorsport can be used “to engage more young people from black backgrounds with science, technology, engineering and maths (STEM) subjects”. He added: “Thousands of people are employed across this industry and that group needs to be more representative of society.” He said he wants motorsport “to become as diverse as the complex and multicultural world we live in”.

The column in the Sunday Times began,

“Who’s worse? The bully that beats you down and torments you or the bystanders that turn away when their words or actions could make all the difference?

For me, and so many others around the world, seeing George Floyd’s murder triggered a sense of deep pain, anguish and frustration. For some of those who saw my social media posts, it may have been hard to understand why I reacted the way I did. After all, from the outside looking in, the life of an unintended American martyr in the city of Minneapolis, a place I’ve never visited, has nothing to do with me. But an all too common display of police brutality in the US has led to a global awakening to the systemic racism,“

The rest of the column is behind a paywall.

Announcing his commission, which has been set up in partnership with the Royal Academy of Engineering, Lewis said: “The time for platitudes and token gestures is over.

“It will explore areas including lack of role models and career services at schools, opportunities to engage more black youth with STEM extracurriculars, barriers that prevent people from more diverse backgrounds joining the racing industry, and problematic hiring practices that result in fewer black graduates entering engineering professions.”This will not be arm’s length research.”We want to hear from the young people and graduates who deal with these challenges every day and we are in the process of bringing on additional partners who work on the ground in black communities to bring first-hand perspective. “In addition, we want to bring in leaders from policy and business who are committed to leading on the activation of research recommendations.”

Lewis said he had “been fighting the stigma of racism throughout my racing career – from kids throwing things at me while karting, to being taunted by fans in black face at a 2007 grand prix”. He added: “I’m used to the idea that no one will speak up for me when I face racism, because no one personally feels or understands my experience. Most of the time, they don’t even see it and if they do, they let their fear of saying the wrong thing get in the way. “The unchanged make-up of the F1 community throughout my career makes it feel like only a certain type of person is truly welcome in this sport, one who looks a certain way, comes from a certain background, fits a particular mould and plays by certain unwritten rules.  “Even now, the media ask me different questions than they do my competitors and make accusations directly and indirectly — you’re not British enough, not humble enough, not loved enough by the public.”And he explained why he called out fellow F1 drivers for not speaking out in the wake of Floyd’s death, an intervention that prompted a number of other leading drivers to condemn racism, including Ferrari’s Charles Leclerc, Renault’s Daniel Ricciardo, McLaren’s Carlos Sainz and the rising British stars Lando Norris and George Russell. Hamilton said: “I saw people I respected choosing to say nothing and it broke my heart. It’s why I had to speak out.”

The Board of Commissioners for The Hamilton Commission include:

The first meeting of the Board of Commissioners took place earlier this month, where the Commissioners shared their initial insights and thoughts on the research plan with Lewis and Hayaatun. The Board will meet quarterly to discuss and inform the latest Commission research and explore how the Commissioners can advance agreed upon recommendations through their networks.

In an interview with The Guardian on Saturday 26 December 2020 about his record breaking year and seventh title, Lewis said:

SWR salutes Lewis for using his platform to stand up and fight for equality for Black people.