About 93% of racial justice protests in the US have been peaceful, a new report finds 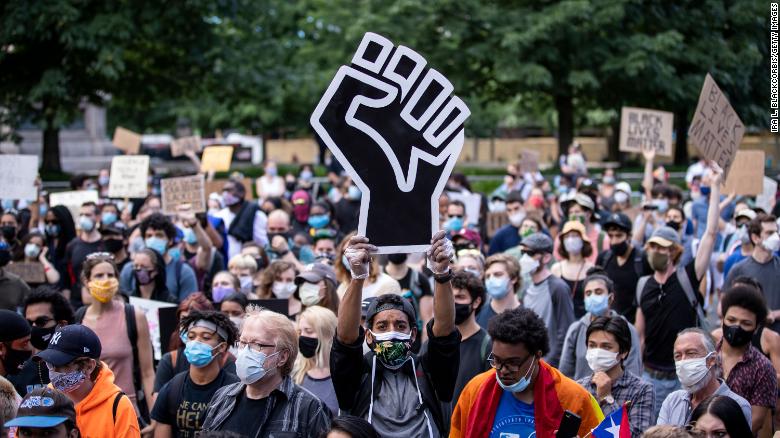 About 93% of racial justice protests in the US since the death of George Floyd have been peaceful and nondestructive, according to a new report. The findings, released Thursday, contradict assumptions and claims by some that protests associated with the Black Lives Matter movement are spawning violence and destruction of property.The report was produced by the US Crisis Project, a joint effort by the Armed Conflict Location & Event Data Project (ACLED) and the Bridging Divides Initiative (BDI) at Princeton University, which collects and analyzes real-time data on demonstrations and political violence in the US.

“These data reveal that the United States is in crisis,” the report’s authors wrote. “It faces a multitude of concurrent, overlapping risks — from police abuse and racial injustice, to pandemic-related unrest and beyond — all exacerbated by increasing polarization.”

The ACLED recorded more than 10,600 demonstrations across the US between May 24 and August 22, most of which were peaceful. About 7,750 of those protests were linked to the Black Lives Matter movement, the report states. Peaceful racial justice protests took place in more than 2,440 locations across all 50 states and Washington, DC — violent demonstrations occurred in fewer than 220 locations, according to the report.

Authorities intervened in BLM protests more than others

Despite the peaceful nature of a majority of the Black Lives Matter protests, the authors note that authorities intervened in 9% of them — or nearly one in 10. Three percent of all other demonstrations, which include unrest over the Covid-19 pandemic, were met with government intervention, the report states. When authorities did intervene, they used force such as tear gas, rubber bullets or pepper spray in more than half of those demonstrations, according to the report.

More than 5% of protests linked to the Black Lives Matter movement were met with force by authorities, compared to 1% of other demonstrations, the authors wrote.

That use of force by authorities in some instances escalated tensions and increased the risks of violence, such as in Seattle and Portland. For example, the authors noted that violent demonstrations in Portland increased from 53% to 62% of all protests after federal agents arrived on scene.”Although federal authorities were purportedly deployed to keep the peace, the move appears to have re-escalated tensions,” the authors wrote, in reference to demonstrations in Oregon. “Prior to the deployment, over 83% of demonstrations in Oregon were non-violent. Post-deployment, the percentage of violent demonstrations has risen from under 17% to over 42%, suggesting that the federal response has only aggravated unrest.”The use of force by authorities also came “amid a wider push to militarize the government’s response to domestic unrest,” the authors wrote. Federal agents and National Guard troops were deployed to quell unrest more than 55 times since George Floyd was killed, according to ACLED data.

Militias and other nonstate actors also intervened in demonstrations, with the authors writing that such groups were “becoming more active and assertive.

“Nonstate actors engaged in more than 100 demonstrations, mostly in response to Black Lives Matter protests, the report states. Those actors include militias and groups from the right and left, such as Antifa, the Proud Boys, the Boogaloo Bois and the Ku Klux Klan.

There have also been a growing number of armed individuals at demonstrations, with at least 50 such cases reported since May 24, according to the report. Many of those cases did not turn violent, though at least one ended in tragedy — as when an armed teenager allegedly fired on protesters in Kenosha, Wisconsin, killing two people and leaving one seriously injured.Protests over racial justice have prompted a number of counterprotests, however, many of which have turned violent, the report states.The ACLED recorded more than 360 counterprotests around the country between May 24 and August 22 — 43 of which turned violent.

Authors say ‘the US is in crisis’

While a vast majority of Black Lives Matter protests were peaceful, the use of force by authorities and intervention by outside actors in those demonstrations are a troubling sign, the report’s authors wrote.

“While these data present only a snapshot of demonstration activity and political violence in America, the trendlines are clear: demonstrations have erupted en masse around the country, and they are increasingly met with violence by state actors, non-state actors, and counter-demonstrators alike,”

the authors wrote. “With two months until the election, the US faces deep divisions over racial inequality, the role of the police, and economic hardship exacerbated by an ineffective pandemic response.”