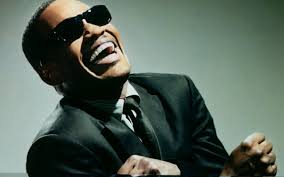 Charles combined blues, gospel, R&B, rock, country music and jazz to create groundbreaking hits such as “Unchain My Heart,” “I’ve Got A Woman” and “What I’d Say.” His impressive multi-award winning 50-year career left an indelible mark on contemporary music all over the world.

Born Ray Charles Robinson on September 23, 1930, in Albany, Georgia, he was raised in Greenville, Florida, and started playing the piano before he was five. At age six, he contracted glaucoma that eventually left him blind. He studied composition (writing music in Braille) and learned to play the alto saxophone, clarinet, trumpet, and organ while attending the St. Augustine School for the Deaf and the Blind from 1937 to 1945. His father died when he was 10, his mother five years later, and he left school to work in dance bands around Florida, dropping his last name to avoid confusion with boxer Sugar Ray Robinson. In 1947, with $600 he moved to Seattle and worked as a Nat “King” Cole-style crooner.

“I was born with music inside me.
That’s the only explanation I know.”

In the decades after Seattle, Ray Charles continued his contributions to the many facets of music in which he excelled. His numerous awards include 8 honorary doctoral degrees, 17 GRAMMYs, the GRAMMY Lifetime Achievement Award, President’s Merit Award, Kennedy Center Honors, National Medal of the Arts and his Playboy Awards. Heads of State, Presidents, Political Dignitaries and members of Royal families have recognized him repeatedly. The King and Queen of Sweden chose him to receive the Polar Music Award, which is that country’s most prestigious award. Rolling Stone Magazine ranked him #10 on their list of the “100 Greatest Artists of All Time” and #2 on their list of the “100 Greatest Singers of All Time.” And in 2013 Ray Charles even received a United States Postal Stamp.

One his warmest compliments came from the “Chairman of the Board” Frank Sinatra, who gave him the name “Genius” “the only true Genius in show business.”

Throughout his career, Charles was active in a range of political and humanitarian causes.

In 1986, Ray Charles formed The Robinson Foundation for Hearing Disorders, Inc., with a $1 million personal endowment. The Robinson Foundation for Hearing Disorders, Inc. later changed its name to The Ray Charles Foundation. The Foundation is dedicated to providing support in the area of hearing disorders and the empowerment of young people through education by offering support to educational institutions and non-profit education programs. Ray Charles said: “The inability to hear is a handicap; not the inability to see.” The vision of The Ray Charles Foundation is to instill in the youth of America that “there is no challenge too great one cannot overcome.”

Of All the hundreds of songs he recorded, Ray Charles’ rendition of “America the Beautiful” remains to this day the definitive version of that song.

It exceeds all others in its ability to lift our collective spirits.

Ray Charles recorded the song in 1972. In live performances he followed a consistent pattern, of improvisations we associate with gospel and soul music. He added, “I’m talkin’ about America” and “I love America, and you should too,” and “Sweet America,” all passionate accents that indelibly marked the song as a personal tribute to the country he loved so much.

Ray Charles performed “America the Beautiful” on national and international world stages, all by popular demand, from the Major League Baseball World Series to NFL Superbowls, and both summer and winter Olympics. Ray’s “America the Beautiful” hits the right tone of brotherhood and patriotism unlike any other song.  It remains one of Ray Charles’ most requested songs, first introduced at his stage show at Carnegie Hall with the unfurling of a giant American flag.

In Ray Charles’ voice the original poem, written in 1893 by Katharine Lee Bates, comes alive to paint the story of the country she envisioned. The canvas is the heart of the people and Ray Charles takes his time with each phrase, carefully crafting a masterpiece in every performance.  Arranged by his longtime friend Quincy Jones, Ray Charles sings and swings, hums and prays, and invites the audience to sing along and they do, in a call-and-response pattern familiar in many churches. It is a powerful expression of unity, community, and love of country.  A seminal example of his magnetism was the 1984 Republican National Convention where Ray Charles delivered his gospel version of “America the Beautiful” filling the captivated audience with tears of awe and joy!

Ray Charles truly popularized the song over decades, following its debut on his groundbreaking album, A Message from the People.When asked about his interpretation, Ray Charles simply said: “I put a little country backbeat on it and turned it my way.”  Amen, Brother Ray.

Ray the movie depicted the real life story of Ray Charles and went on to become one of the highest grossing biopics in history, earning over $125 million at the box office.  Jamie Foxx for his performance went on to win the Academy Award for best performance by an actor in the leading role. “Ray approved of Jamie and the movie as a whole, with emphasis regarding his mother prior to his death,” stated Valerie Ervin.

Jamaica Past (images)
Selected images from 1800 - 1923
Previous post ‘The man who shot my mum is still living his life’: Cherry Groce’s son on life after police brutality
Next post ROBERTA FLACK