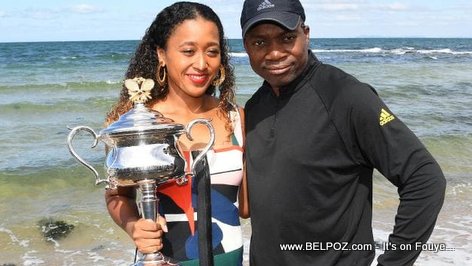 Her father Leonard, was born in Haiti; her mother Tamaki, was born in Japan. One evening in 1999, when the girls were just toddlers, Leonard became transfixed by a broadcast of the French Open featuring the American prodigies Venus and Serena Williams, then 18 and 17, who teamed up to win the doubles title that year. He himself played little tennis. But Richard Williams, the sisters’ father and coach, had played none at all. And Williams had created a plan to turn his daughters into champions, teaching them how to serve big and hit hard from every corner of the court.

“The blueprint was already there,” Francois told the New York Times Magazine, “I just had to follow it.”

Naomi was coached by Leonard from the age of 3, when they moved to the United States. Her father decided early on that both his daughters would represent Japan and not the USA in their professional careers.

A New York Times Magazine article describes the scene at the time of the interview, as Naomi, aged 18 at the time, trains with both parents present:

On the sideline, Osaka’s Japanese mother, Tamaki, sat in the shade in a denim jumpsuit and sunglasses, her daughter’s miniature Australian shepherd sitting by her feet. Pacing on the grass alongside the court was her Haitian-born father, Leonard Francois, a taciturn man in a baseball cap who trained her from age 3 and still tracks nearly every shot she hits.

Since gaining a high profile in the sport (Mari has been plagued by injury and thus far, her career has not taken the upward trajectory of Naomi’s), Naomi has used her platform to speak up on social justice issues. She has addressed the fact that girls are twice as likely to drop out of the sport by teaming up with Nike and Laureus Sport for Good, a grassroots initiative aiming to change girl’s lives through play and sport.

On 26 August 2020, she withdrew from the Western & Southern Open in protest against racial injustice, saying:

…before I am a Black woman. And as a Black woman I feel as though there are more important matters at hand that need immediate attention, rather than watching me play tennis…Watching the continued genocide of Black people at the hand of the police is honestly making me feel sick to my stomach.

On September 1, 2020, Naomi wore a Breonna Taylor (Breonna was summarily executed by Louisville Metro police in her bed on March 13, 2020) mask at the US Open, in her first round match at the Arthur Ashe Stadium. “I’m aware that tennis is watched all over the world, and maybe there is someone that doesn’t know Breonna Taylor’s story,” Osaka said after her first-round match. “Maybe they’ll like Google it or something. For me, just spreading awareness. I feel like the more people know the story, then the more interesting or interested they’ll become in it.”

Two days later on September 3, 2020, she wore an Elijah McClain (Elijah was choked by Colorado police on August 24, 2019, resulting in his death on August 30, 2019) mask, at the same event. “I have seven,” Osaka said in her on-court interview following her 6-1, 6-2 victory over Camila Giorgi. “It’s quite sad that seven masks isn’t enough for the amount of names [of Black people killed by members of law enforcement], so hopefully, I’ll get to the finals and you can see all of them.” “I still don’t think his name is very put out there compared to George Floyd or Breonna Taylor,” she said.

On September 4, 2020, at the Arthur Ashe Stadium, Naomi wore a mask emblazoned with Ahmaud Arbery’s name. Ahmaud was shot to death by father and son white supremacists on February 23, 2020.

“I remember Trayvon’s death clearly. I remember being a kid and just feeling scared.I know his death wasn’t the first but for me it was the one that opened my eyes to what was going on. To see the same things happening over and over still is sad. Things have to change.”

“I often wonder if what I’m doing is resonating and reaching as many people as I hope. That being said, I tried to hold it in on set but after watching these back I cried so much. The strength and the character both of these parents have is beyond me. Love you both, thank you”

Editor’s note: SWR salutes Naomi Osaka for using her platform to highlight the fatal prejudice that people of African descent suffer worldwide for merely being born in the skin that they were blessed to be born in.