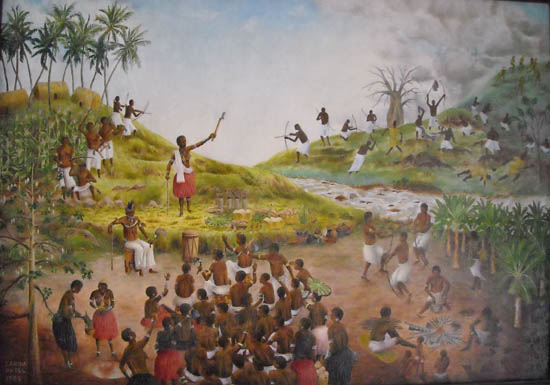 Mekatilili wa Menza, writes Neil Carrier, was a Giriama woman who played a key role in inciting resistance against the British in the period 1912-1914, urging Giriama not to co-operate with attempts to recruit their men into wage labour. As part of a recent campaign to honour Kenya’s heroes and heroines, Mekatilili’s life and deeds are now being commemorated with an annual festival on the coast and a cultural centre established at her home village of Ulaya wa Jele, inland from Malindi.

The following was written by Kenyan historian Zarina Patel, and translated from Kiswahili by Neil Carrier.

The History of Heroine Mekatilili

Mekatilili was an old woman when the British began to steal our country.

The British found the land occupied by the Giriama – more precisely, that around the Galana river – very attractive. Therefore, the colonial regime intended to rob the Giriama of this land and give it to British settlers. Just as the Giriama had fought against the oppression of the Portuguese in the 16th Century, so they also opposed that of the British.

So as to succeed in their plot to steal our land and to compel our countrymen to work for them, the imperialists planned thus:

– to divide people by frightening and bribing them

– to demand both hut and personal taxes

Our hero, Mekatilili, understood well the colonial plan, and discussed it with the Patriot Wanje wa Mwadorikola, with the women of the Guild of Kifudi, and others. She began to warn the Giriama of the British plot, and while travelling from Galana up to Kaloleni, she gave public addresses. With her prompting, the Giriama quickly began to defend their culture, to refuse to do the work of the imperialists, or to fight in their war. In short, she made them understand the objective of the colonialists.

17th October 1913: The colonialists arrested Mekatilili and Wanje wa Mwadorikola, and took them all the way to Kisii to imprison them for 5 years. However, on the 20th April 1914, these wondrous patriots disappeared from jail and travelled to the Coast to continue their struggles against the British.

14th August 1914: on this day, when the start of the Imperialists’ 1st World War was announced, the colonialists committed sacrilege by destroying the holy site of Kaya Kaloleni by fire. The Giriama took up pangas, scythes, bows and arrows and pounced upon British officers and troops, as well as the Giriama traitors. They attacked the colonial HQ at Mwangea, burning District Commissioner Champion’s camp, the jail and the police bandas. Finally the British were forced to give up their plot to settle on the land of Galana.

Before burning the Kaya, the colonialists once more arrested our hero, Mekatilili. She was released in the year 1919, and the Giriama welcomed her with great rejoicing and pride.

Jamaica Past (images)
Selected images from 1800 - 1923
Previous post EAST AFRICA PROTECTORATE
Next post John Boyega: ‘I’m the only cast member whose experience of Star Wars was based on their race’