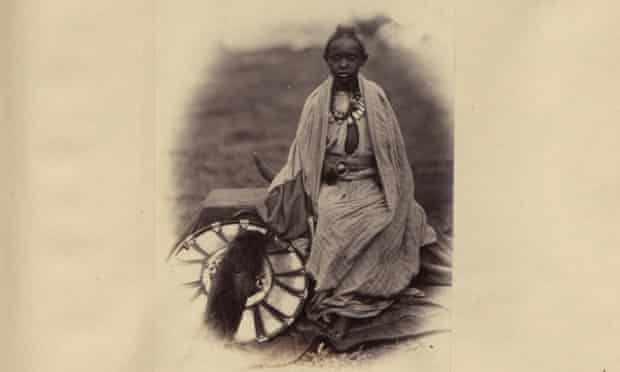 This Ethiopian prince was kidnapped by Britain – now it must release him, The Guardian.

You see him first as he was soon after his father’s death: a seven-year-old boy staring, stunned, into the camera. He sits on a cloth-covered bench, next to a shield and a strip of animal hide. Around his shoulders, a long shamma drapes and gathers at his folded ankles. You note his bare feet, the way one toe, curled upward and tense, hints at the emotions he is keeping guarded. He wears the silver-baubled necklace that will travel with him from Ethiopia to England, the one also seen in pictures where he is made to sit for Julia Margaret Cameron and other photographers. His mother, if still alive, will soon die unexpectedly, leaving him in the hands of the same British men who came to confront his father. But for now, he has not lost everything.

This photograph of Prince Alemayehu was taken during the 1868 Napier expedition, a British military incursion into Maqdala, Ethiopia, to rescue three dozen European prisoners. His father, Emperor Tewodros, took captives when his letters to Queen Victoria were ignored. Led by Sir Robert Napier, the punitive mission was extravagant: 13,000 soldiers, 8,000 auxiliary workers, and thousands of followers in search of adventure or a story. Several, like Richard Holmes of the British Museum, also came in search of loot.

In the end, Emperor Tewodros released the prisoners unharmed, then committed suicide rather than surrender. What happened next would be described as a “deluge of fire” and one of the greatest looting orgies ever undertaken in the name of the British empire. Alemayehu, by now an orphan, was put on board the Feroze, the same ship as Holmes, who was taking back to Britain the largest haul of stolen artefacts in Ethiopia’s history. The objects went into British museums and libraries. Alemayehu became a ward of Queen Victoria and, despite his continual pleas to be returned to his homeland, he died aged 18 in England. He was buried at Windsor Castle, where he remains. A plaque, “When I was a stranger, ye took me in,” marks his vault.

Today, we can recognise Napier and his forces for the marauders that they were. We can acknowledge the imperialist arrogance that would kidnap a young boy and trumpet the achievement through newspapers and photographs.

The generosity of hindsight might even explain why Alemayehu’s pleas to return home were refused. But there is no longer any excuse for that same refusal and arrogance. There is no viable reason to continue to hold his remains hostage.

He has become, like the sacred and valuable objects still in British museums and libraries, a possession.

Alemayehu is still trapped, a plaque forcing on to the narrative of his life a sentiment that he would not have chosen

In 2007, the then Ethiopian president Girma Wolde-Giorgis sent Queen Elizabeth a formal request for the return of the prince’s remains. Alemayehu’s plight has been the subject of radio plays, poems, and books. Scholars and concerned citizens have started campaigns; a young boy wrote a widely publicised letter to Tony Blair. Yet every request to the Queen or Buckingham Palace has been met with silence or refusal. Alemayehu is still trapped in the land of his kidnappers, a plaque forcing on to the narrative of his life a sentiment that he would not have chosen as his own.

In photographs, Alemayehu is rendered fragile and exotic. Though she acknowledges that “his was no happy life, full of difficulties of every kind”, the queen does not seem to consider that this unhappiness might have broken this young boy, might have sent him spiralling into ugly, impolite anger. What the queen wanted to imagine in Alemayehu, what England still wants to possess, is a foreigner who earns refuge through politeness, quietness and grace.

Alemayehu, like those who are today crossing borders to flee violence and oppression, endured a forced migration. Yet there is nothing graceful about the overloaded boats heading towards Europe. There is nothing polite about those who have rushed fences and tunnels to escape devastation. If there is beauty to be seen, it is in what they refuse to give up: aspirations and dreams, a love willing to risk all for family, the photographs and letters they clutch even when it requires superhuman strength. These people too are portrayed as strangers. But they, lacking in the refinements that Victoria praised in Alemayehu, are not the kinds of foreigners acceptable to a Europe still looking for comfortable narratives that can be condensed on to plaques and fit into museum displays.

You see him look longingly at these mementos from home, now imprisoned behind glass. You see him, stoic, as he is guided from one vitrine to the other. You see his steps slow and falter as he approaches a beautiful long dress. You imagine that in that instant he wants to smash his fist through the glass and take back his mother’s dress, bury himself in her familiar scent. Instead, he turns to the queen and demands again to be sent home.