AFRICAN RELIGION IN THE AMERICAS & BRAZIL 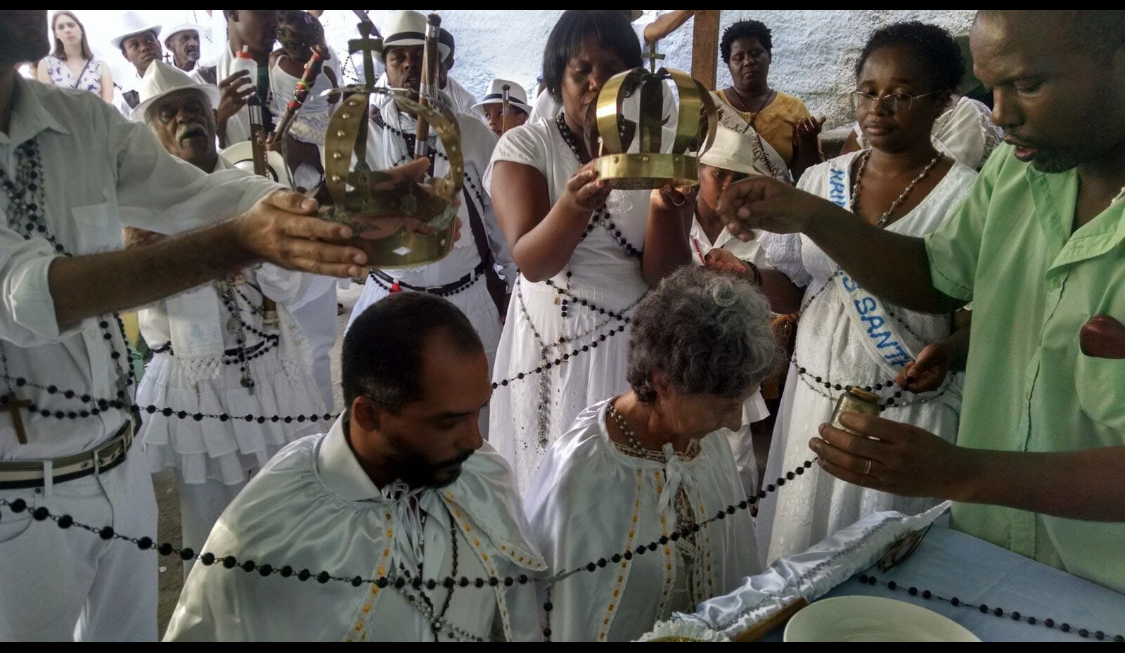 The African religions migrated to the Americas in the slave ships; carried into the region in the spiritual beliefs held by those whose bodies the colonisers had entrapped, kidnapped and enslaved.

Before that the Portuguese had used their religion as a weapon, as a diplomatic tool, as a method for religious conversion and an instrument to form alliances. While the Africans incorporated the new tenets of christianity into their old religions, using them for their own purpose (the conversion of Kingdom of Congo is an example of this intertwining of cultures).

The main points of contact between Africa and America were the Kingdom of Congo and Gulf of Guinea.The cultural and religious references came from there to form the complex that shaped Black consciousness in the Americas.

So today we can find some ties between Blacks in the USA, Cuba, Colombia and Brazil, namely in their traditional religions. Most regional and syncretic forms developed in the Americas are related to the linguistic  groups of Africans who were originally from Benin, Senegal, Nigeria and Congo. Generally their blend of religious beliefs and practices is known as vodun.

In the Americas the beliefs were transformed into cults and rites with slight variances but with more similarities than differences to their original forms. In different parts of the Americas the same belief system was given different names; Santeria (Cuba), Vodun (Haiti, Caribbean and Lousiana, USA),  Candomblé, Batuque e Umbanda (Brazil).

In general all these religions are committed to honoring the ancestrals and the Orishas (Mkisis when the matrix is bantu) that are gods in a politheist pantheon. There are hundreds of gods, and the same god can have different manifestations, all of them nested in former geographical origins such as the cult of  Xangô in Oyó in Nigeria, which is directly linked to Itaparica Island in Bahia, Brazil).

The Orishas or Mkisis are connexions between natural forces and the supernatural world. This distinction of natural and supernatural is not strictly true, as in the African belief system there is no separation – the gods are among us, they are affecting us and being affected by our actions and ready to manifest themselves as and when they are correctly invoked and are delighted by proper gifts, performances or even sacrifices.

So the common characteristic of all these religious branches is that they are Festive and celebrating religions, based on intricate rituals that involve asking permissions of the gods, obtaining directions of how to conduct ceremonies and gain favour from the gods, making preparations and properly celebrating the gods, which can demand days or even months to bring to realisation.

The candomble in Brazil is divided into many branches according to the linguistic and musical and ritual origins. The divisions are called nations, not referring to a specific geographic common region, but a more spiritual pertainment. The main branches are: Sudanese (not the actual Sudan) Nagô (yorubá nations: Keto, Efa, Ijexá, Nagô Egbá, Batuque e Xambá), Dahomey Jeje (Fon, Éwé, Mina, Fanti, Ashanti), Bantu Angola (Angola, Congo, Cabinda).

The Afro American religious system  demands a lot of knowledge both spiritual and practical. So that requires a strict initiation process that can last for years. Each step helps to build a sacred hierarchy that defines the roles of participants.

In Brazil the representatives of these African religions are recognized as important stakeholders and they hold seats in the National Nutritional and Food Security Council (CONSEA in portuguese: http://www4.planalto.gov.br/consea/acesso-a-informacao/institucional/o-que-e-o-consea). They were important in recent years in the fight against hunger, responsible for the upgrade of Brazil on the UN Map of Hunger  (2019-hunger-map).

Unfortunately, since 2019, this Council has been relegated, been the subject of ostracism and the program was suspended, the government has tried to dissolve it despite it being the very basis of fighting against hunger in Brazil.

The African religions have been persecuted, prohibited and victims of campaigns of disinformation and targets of hatred since the dawn of the slave trade. Now they confront the opposition of evangelicals and extreme right wing catholics who use to denounce them for the animal sacrifices.

But in reality, they are the very consciousness of life; they are against animal suffering, respect and heal the animals before sacrifices, avoid any waste and preserve the natural biodiversity in livestock more than the current industrial chain of meat production.