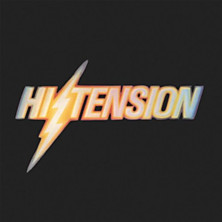 Hi-Tension were briefly at the vanguard of British funk, and their sole album remains a vibrant capture of a simpler time. Running in tandem with punk, this first wave of what became known as Brit funk emulated the prevalent US soul sound, but simultaneously had a uniquely underlying jagged edge.

Coming out of northwest London, Hi-Tension injected a much-needed breath of air in the stultifying heat of the 1976 summer.

Gaining fans such as Johnny Jackson, the drummer in The Jacksons’ touring band, a tape of theirs found its way to Chris Blackwell at Island Records. Although it took Hi-Tension until 1978 to release their debut album, they did so on Island, one of the most hallowed record labels of all time.

Produced by group mentor Ayivor and Alex Sadkin, who would soon produce Grace Jones’ groundbreaking work at Compass Point Studios, and in part by Blackwell himself, this album captured the best of the group’s electrifying stage set.

From the sunshine wake-up of You’re My Girl through the groove of Searchin’, this was exciting music.

Their debut single, Autumn Love, is suitably dreamy and laidback. Like Kool & the Gang, they had their own, eponymous theme song – Hi-Tension was a steamy, percussion-driven number that reached number 13 on the UK singles chart in May 1978.

But it was the follow-up single, British Hustle, which took Hi-Tension into the top 10. It lit a flame with the soul DJs of the time, Robbie Vincent and Greg Edwards, who rushed to play them. The single had a freshness, edginess and pizzazz that simply wasn’t coming out of the US disco phenomenon at that point.

Their material is sung with a British accent throughout, which probably explained their lack of success in the US.

And that was more or less it.

It was always something of a disappointment that Hi-Tension didn’t last longer – they certainly paved the way for the next wave of Brit funk. Light of the World, Linx, Central Line and Freeez all owed them a debt, and this, their only album, is a testament to their prowess.