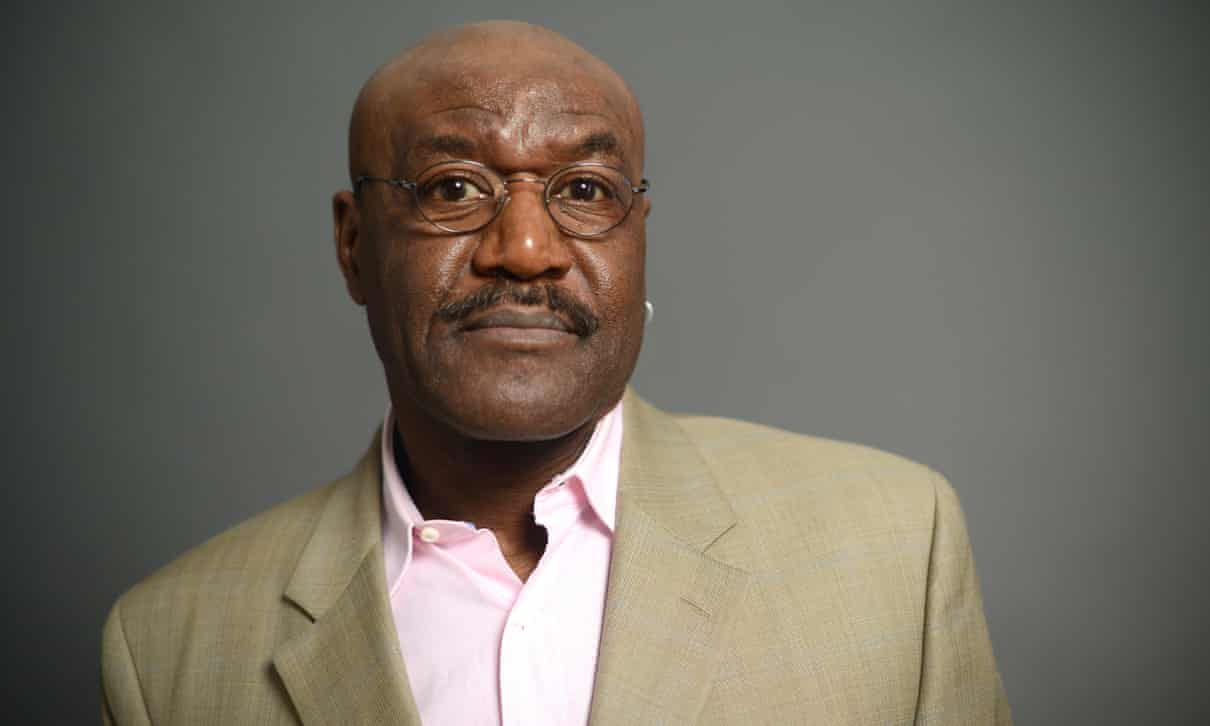 On the stage and on the big screen, Delroy Lindo projects a powerful presence that is almost impossible to ignore. Alhough it was not his first film role, his portrayal of the bipolar numbers boss West Indian Archie in Spike Lee’s Malcolm X (1992) is what first attracted attention to Lindo’s considerable talents. Since then, his star has slowly been on the rise. An Arsenal F.C. supporter, he still visits England although he has resided in Oakland, California for some decades.

The son of Jamaican parents, Lindo was born on 18 November, 1952 and raised in Lewisham, England, United Kingdom, until his teens when he and his mother, a nurse, moved to Toronto, Ontario, Canada. A little later, they moved to the United States, where Lindo would graduate from the American Conservatory Theater in San Francisco.

After graduation, Lindo landed his first film role, that of an Army sergeant in More American Graffiti (1979). However, he did not appear in another film for ten years. In the meantime, Lindo worked on stage and, in 1982, debuted on Broadway in “Master Harold and the Boys” directed by the play’s author, Athol Fugard. In 1988, Lindo earned a Tony nomination for his portrayal of Harald Loomis in Joe Turner’s Come and Gone.

Though he was obviously a talented actor with a bright future, Lindo’s career stalled. Wanting someone more aggressive and appreciative of his talents, Lindo changed agents (he’d had the same one through most of his early career). It was a smart move, but it was director Spike Lee who provided the boost Lindo’s career needed. The director was impressed enough with Lindo to cast him as patriarch Woody Carmichael in Lee’s semi-autobiographical comedy Crooklyn (1994).

For Lindo, 1996 was a big year. He landed major supporting roles in six features, including a heavy in Barry Sonnenfeld’s Get Shorty (1995), another villainous supporting role in Lee’s Clockers (1995), and still another bad guy in Feeling Minnesota (1996). Lest one believe that Lindo is typecast into forever playing drug lords and gangsters, that year he also played baseball player Leroy “Satchel” Paige in the upbeat Field of Honour (1996) (a.k.a. Baseball in Black and White), for which he won a NAACP Image Award nomination. Since then, the versatile Lindo has shown himself equally adept at playing characters on both sides of the law. In 1997, he played an angel opposite Holly Hunter in Danny Boyle’s offbeat romantic fantasy A Life Less Ordinary (1997) and, in 2009, a vengeful cop in an episode of Law & Order: Special Victims Unit (1999).

Lindo graduated from San Francisco State University in 2004 with a degree in Cinema.

He puts in a particularly mesmerising performance in Da 5 Bloods as maniacal Paul, whose son David follows him to Vietnam. Operating on a hair-trigger temper and a body marinaded in Agent Orange, Lindo’s performance is definitely the one to watch.

The following is an extract from an interview that Delroy did with The Guardian newspaper (Steve Rose) on 3 June 2020, re the release of the Da 5 Bloods, a Spike Lee directed Netflix movie starring Delroy Lindo, Clarke Peters, Jonathan Majors, Norm Lewis, Isiah Whitlock Jr. and Chadwick Boseman.

Delroy Lindo has waited 25 years to work with Spike Lee again and Da 5 Bloods gives him one of the best roles of his career. But when he first read the script, the actor had a few questions about his character. Chiefly: “Does he have to be a Trump supporter?”

He says: “I remember saying to Spike, ‘I’ve got a 17-year-old son, man. I don’t want him seeing me representing this person.’” Like Lee, who routinely refers to Donald Trump as Agent Orange, Lindo can barely bring himself to identify the president by name. “It had to do with my values, as a parent and as a being on the planet, feeling that I would be representing an individual who is … I don’t have the words to discuss this individual.” Couldn’t the character, he pleaded, just be an arch-conservative? “Spike thought about it for a few days, then said, ‘Yeah, I really need him to be a Trump supporter.’”

All the same, the role was just too good to pass up. Lindo plays Paul, one of four African American Vietnam veterans returning, in the modern day, to the country where they fought. Their stated aim is to recover the remains of their fallen comrade, played in flashbacks by Chadwick Boseman, but they have an ulterior motive, another plan that makes their mission much less laudable. As with Lee’s previous film, BlacKkKlansman, Da 5 Bloods is a combustible mix of tones and genres that only he could pull off, combining black history, crime thriller, war movie, character drama, even gory comedy. “Fundamentally,” says Lindo, “it’s a love story between these men.”

Lee’s work is always relevant when it comes to African American issues, but arriving at this moment – with the US rocked by protests and riots over the killing of George Floyd – Da 5 Bloods resonates in ways even he could not have anticipated. The film highlights the disproportionate nature of the African American sacrifice in Vietnam: black people, it claims, made up 11% of the US population but 32% of troops.

But it also feeds into issues of black patriotism, inequality and justice. In one flashback, in the Vietnamese jungle, the five comrades learn of the death of Dr Martin Luther King via Hanoi Hannah, the Vietcong propaganda radio broadcaster. She informs them of the widespread rioting back home, and the brutal government response. “Why you fight against us so far away from where you are needed?” she asks. Lee overlays her speech with archive clips of the 1968 riots. It looks a lot like this week’s news footage.

Lindo agrees. He recently attended a rally and has been meeting with young people and sympathetic law enforcement in Oakland, where he lives, on the east side of San Francisco Bay. The rally was peaceful and diverse, he says, which at least gives him some hope that things have progressed since 1968. “The events of the last few days are brilliant examples of taking the hurt, fear, anxiety and rage – and focusing those things constructively, creatively and humanely, although I am not naive enough to think that things will change, even in the next six months. But I want to believe that the seeds have been planted.”

Lindo, now 67, has a calm, authoritative bearing that tends to make everyone quieten down and listen. Over his 45-year career, he has had mostly smaller roles in big movies (Get Shorty, The Cider House Rules, Gone in 60 Seconds, Ransom) and bigger roles in smaller movies (baseball hero Satchel Paige in Soul of the Game, explorer Matthew Henson in Glory & Honour). But whatever it is that defines actorly “presence”, Lindo has got it. In real life, he is not so different – at least not in the context of a Zoom conversation from his home. He is serious and thoughtful, choosing his words carefully. Most of the lighter-hearted questions I had prepared go unasked.

High points on Lindo’s CV undoubtedly include the three films he made with Lee in the 90s: Malcolm X (in which he played the activist’s criminal mentor), Crooklyn (a struggling father), and Clockers (drug boss). Which poses the question: why did it take so long for them to work together again? “Ask Spike, god doggit!” Lindo says. “We’ve bumped into each other over the years, and I always say, ‘Spike, we really need to do something.’ And he says, ‘Yeah, yeah. We need to do something.’ But if I had to wait 25 years to work with Spike, this is a good one to have waited for.”

Lindo plays the most complex and conflicted character of the piece. While his comrades, and Vietnam itself, have moved on from the war, Paul is still living with the trauma and anger, his red MAGA cap a symbol of his bitterness. He gets a striking straight-to-camera monologue towards the end that you can already see fitting into montages at awards ceremonies.

Politics aside, Lindo had a great time making the film. Shooting in Thailand and Vietnam was a proper adventure: battle scenes, river journeys (cue Apocalypse Now reference), snakes, landmines, and literally hacking through the jungle with a machete. “Oh man. That’s gold for an actor! Getting that machete and – swish! It’s drama, it’s what we went to acting school for, absolutely.”

Lindo doesn’t know any actual black Trump supporters, but he did manage to get his head around the concept. “I have a cousin who was in ’Nam and it still rankles him that he was reviled as a ‘baby-killer’. So if one extrapolates that kind of rejection, one can end up at a place where you say, ‘OK, here’s a man, Trump, who’s saying I’m going to make things right for Americans. I like what he’s saying.’”

Lindo’s own identity is not straightforward. He was actually born in Lewisham, London, to parents of Jamaican origin (his ability to do a perfect accent helped land him the role of West Indian Archie in Malcolm X). He spent the first 12 years of his life in the UK before his mother, a nurse, emigrated to Canada then to San Francisco, where he studied acting. He still has an affection for Britain and returns often. In 2003’s Wondrous Oblivion, he played a cricket-loving Jamaican father in 1960s London.

Everything in my life is as a result of leaving England. I could never in a trillion years have had this career there

He asks about the gentrification of Peckham, worrying it will go the same way as Brixton. But he does not really feel British any longer. “Everything I have achieved in my life has come as a result of leaving England. I could never in a trillion years have had this career in England. Never.”

But he would love to work in the UK again. “There are many components of the black British experience that have not been explored. Is that an accurate thing for me to say?” He’s choosing his words carefully again. “I’m curious to unpack those stories. I have an intense interest in the Windrush period, because my mom was part of that.”

Of course, he is familiar with the recent Windrush scandal, in which black British citizens were wrongfully detained and deported to Jamaica by the UK Home Office. “It felt very, very British,” he says. “It was disgusting and enraging. For me, it went right to the centre of the British relationship with people of colour and the historical violations that have been visited on them. They manifest slightly differently but British racism is every bit as virulent and violent as American racism.

Even with second and third generation black people who were born British citizens, there is still this element of, ‘You don’t belong here’ and ‘You are an immigrant.’”

Even given what’s happening right now in the US? He cites the murder of black teenager Stephen Lawrence in 1993. “When I heard it had happened in Eltham – where I lived as a child – it did not surprise me, given incidents that happened to me there.” He also remembers working with playwright Kwame Kwei-Armah in London the early 2000s. Kwei-Armah drove Lindo back to his hotel one evening. “We were parked outside, talking, and all of a sudden cops descended on us: 20 or 30 cops. They told us to get out and put our hands on the hood and they went through everything in the car. I remember the smirks on their faces. They said they were acting legitimately and I said, ‘Bullshit. You did this cos there were two black men sitting in a car in a neighbourhood where we didn’t belong.’”

He laughs and the mood in the room brightens again. “So y’all have your own problems!” he says.