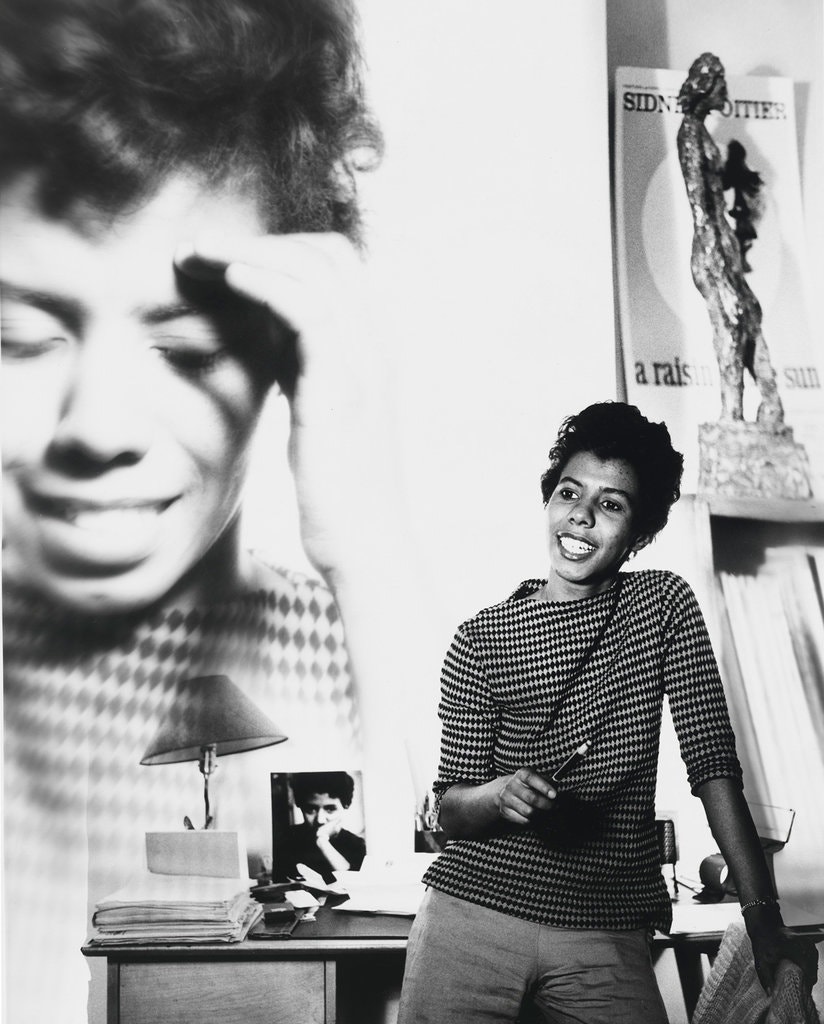 Lorraine Hansberry was born at Provident Hospital on the South Side of Chicago on May 19, 1930. She was the youngest of Nannie Perry Hansberry and Carl Augustus Hansberry’s four children. Her father founded Lake Street Bank, one of the first banks for blacks in Chicago, and ran a successful real estate business. Her uncle was William Leo Hansberry, a scholar of African studies at Howard University in Washington, D.C.

Despite their middle-class status, the Hansberrys were subject to segregation. When she was 8 years old, Hansberry’s family deliberately attempted to move into a restricted neighborhood. Restrictive covenants, in which white property owners agreed not to sell to blacks, created a ghetto known as the “Black Belt” on Chicago’s South Side. Carl Hansberry, with the help of Harry H. Pace, president of the Supreme Liberty Life Insurance Company and several white realtors, secretly bought property at 413 E. 60th Street and 6140 S. Rhodes Avenue. The Hansberrys moved into the house on Rhodes Avenue in May 1937. The family was threatened by a white mob, which threw a brick through a window, narrowly missing Lorraine. The Supreme Court of Illinois upheld the legality of the restrictive covenant and forced the family to leave the house. The U.S. Supreme Court reversed the decision on a legal technicality. The result was the opening of 30 blocks of South Side Chicago to African Americans. Although the case did not argue that racially restrict covenants were unlawful, it marked the beginning of their end.

Lorraine graduated from Englewood High School in Chicago, where she first became interested in theater. She enrolled in the University of Wisconsin but left before completing her degree. After studying painting in Chicago and Mexico, Hansberry moved to New York in 1950 to begin her career as a writer. She wrote for Paul Robeson’s Freedom, a progressive publication, which put her in contact with other literary and political mentors such as W.E.B. DuBois and Freedom editor Louis Burnham. During a protest against racial discrimination at New York University, she met Robert Nemiroff, a Jewish writer who shared her political views. They married on June 20, 1953 at the Hansberrys’ home in Chicago.

In 1956, her husband and Burt D’Lugoff wrote the hit song, “Cindy, Oh Cindy.” Its profits allowed Hansberry to quit working and devote herself to writing. She then began a play she called The Crystal Stair, from Langston Hughes’ poem “Mother to Son.” She later retitled it A Raisin in the Sun from Hughes’ poem, “Harlem: A Dream Deferred.”

In A Raisin in the Sun, the first play written by an African American to be produced on Broadway, she drew upon the lives of the working-class black people who rented from her father and who went to school with her on Chicago’s South Side. She also used members of her family as inspiration for her characters. Hansberry noted similarities between Nannie Hansberry and Mama Younger and between Carl Hansberry and Big Walter. Walter Lee, Jr. and Ruth are composites of Hansberry’s brothers, their wives and her sister, Mamie. In an interview, Hansberry laughingly said “Beneatha is me, eight years ago.”

Her second play, The Sign in Sidney Brustein’s Window, about a Jewish intellectual, ran on Broadway for 101 performances. It received mixed reviews. Her friends rallied to keep the play running. It closed on January 12, 1965, the day Hansberry died of cancer at 34.

Although Hansberry and Nemiroff divorced before her death, he remained dedicated to her work. As literary executor, he edited and published her three unfinished plays: Les Blancs, The Drinking Gourd and What Use Are Flowers? He also collected Hansberry’s unpublished writings, speeches and journal entries and presented them in the autobiographical montage To Be Young, Gifted and Black. The title is taken from a speech given by Hansberry in May 1964 to winners of a United Negro Fund writing competition:

“…though it be thrilling and marvelous thing to be merely young and gifted in such times, it is doubly so, doubly dynamic, to be young, gifted and black!”

Lorraine Hansberry was one of the most brilliant minds to pass through the American theater, a model of that virtually extinct species known as the artist-activist.

She died young, of pancreatic cancer at the age of 34, but left behind a body of work containing at least two genuine masterpieces, whose political and emotional reach more than make up for its relative slimness. “The Sign in Sidney Brustein’s Window” (1964), a shattering study of liberal self-delusion and whiteness as an existential crisis, is criminally neglected, but “A Raisin in the Sun” (1959) is perhaps the most widely read, taught and produced play by a black writer in history.

Yet its significance is frequently reduced to its having been the first play by a black woman to be staged on Broadway — as if being on Broadway ever had anything to do with literary merit. In fact, “A Raisin in the Sun” was a game-changer, still virtually unmatched in the power and polish of its composition as a study of African-American lives; in its sly conceptual wrestling with the American theater canon’s white masculinist character (see Arthur Miller and Clifford Odets); and in its appropriation of social-realist trappings to break new ground for emotional identification with black bodies. You could probably divide American drama into before “Raisin” and after.

The plays of August Wilson would be unthinkable without the groundwork laid by Hansberry’s aesthetic and emotional experiments, and her effect is apparent in the ascension of Lynn Nottage, recently the winner of a historic second Pulitzer Prize for her play “Sweat,” to the front ranks of American dramatists working today. Without Hansberry, it’s easy to see that there might be, in addition to no Nottage, no George C. Wolfe, no Suzan-Lori Parks, no Lydia Diamond, no Tarell Alvin McCraney. I would dare to suggest that there might even be no Spike Lee, no Shonda Rhimes and no Donald Glover.

Born in 1930 into a middle-class black family in Depression-era Chicago, Hansberry seemed almost predestined to rock the boat of American culture. Her mother was a ward leader for the Republican Party. Her father, a local real-estate developer, successfully sued his way into a white neighborhood, a legal battle that went all the way to the Supreme Court. (This ordeal made an impression on the adolescent Hansberry and, in part, inspired “A Raisin in the Sun.”) At the University of Wisconsin in Madison, where Lorraine studied painting and sculpture and acted in plays, she single-handedly integrated a women’s dorm. Early in her writing life, she was mentored by both W. E. B. Du Bois and Langston Hughes. And yet next to nothing is broadly known about her life, beyond the facts that she was black and a woman and, maybe, that she was a communist and queer.

So Imani Perry, a prolific African-American studies scholar at Princeton, is spot on when she writes in her new book, “Looking for Lorraine,” that Hansberry “has had far too little written about her. … Her image in the public arena has a persistent flatness.” Yet it is difficult to assess a book that admits within its first two paragraphs that it has no idea what it is. Perry concedes that what she has written is “less a biography than a genre yet to be named.” She hazards instead the non-idea of a “third person memoir,” which is, unhelpfully, the very definition of a biography.

In fact, “Looking for Lorraine” is something between a fan’s notes and an academic monograph, less an unpacking of the archive to reveal the life than an exercise in putting the archive in historical context. Its strongest chapters — on “A Raisin in the Sun” and Lorraine’s coming into her own as a public intellectual — are masterly syntheses of research and analysis. It’s a joy for devotees to encounter some record of Hansberry’s influences, including the Chicago poet Gwendolyn Brooks, the Irish playwright Sean O’Casey and the French philosopher Simone de Beauvoir.

Hansberry’s influence on her contemporaries was equally striking. Nina Simone, whom she befriended during her early stardom, credited Hansberry for her political education: “We never talked about men or clothes or other such inconsequential things when we got together. It was always Marx, Lenin and revolution — real girls’ talk.” James Baldwin was a friend and intellectual sparring partner, whose work, read alongside hers, can sometimes seem, as Perry puts it, like a “call-and-response.” And then there is Hansberry’s dressing-down of Robert F. Kennedy, who as attorney general in 1963 invited her to a private gathering of “influential” blacks to discuss racial unrest in Birmingham. As Baldwin later recalled it, Hansberry, with growing irritation, scolded Kennedy for failing to see racial injustice as a moral rather than social problem, and the evening ended with her walking out. Within a month, however, President John F. Kennedy delivered the speech that led to passage of the Civil Rights Act, invoking a moral imperative for civil rights as well as a legal one.

Perry makes a welcome case for a fresh assessment of Hansberry’s nondramatic works: her short stories, many published pseudonymously in lesbian magazines, and her many letters and op-eds on politics and literature for The Village Voice and The New York Times. (Where is her Library of America edition?) Yet much of the material Perry discusses is drawn from Hansberry’s published writings, which might be a negligible point if the body of work she left behind were not easily consumable over a matter of days.

This also might explain why Perry seems on her least sure footing when addressing Hansberry’s childhood. Hansberry didn’t find her calling as a writer until she was in her 20s, and then seemingly only by accident, having dropped out of Wisconsin and moved to New York, where she took a job as a journalist for a leftist Negro weekly. Sadly, the motives for her turn away from the visual to the literary arts are virtually glossed over here. There are hints that early in her career the theater played a significant role in a relationship with a female friend — possibly a lover — but these, like so many potential threads linking Hansberry’s queerness with her art, are left unexplored. Similarly, the dynamics of her longest romantic relationship, with Dorothy Secules, an executive at a candy company who was a tenant in the brownstone Hansberry owned in Greenwich Village, are dispensed with in a few paragraphs. (Hansberry was married for 11 years to the songwriter and political activist Robert Nemiroff.)

At one point, Perry says she “dare not” speculate about the suggestion of same-sex desire in a poem Hansberry wrote when she was 19, but she has no problem speculating about Hansberry’s grief over the loss of her father or, later, her experience of terminal illness. After proposing connections between a piece of Hansberry’s queer fiction and her life, Perry concedes, “But I cannot say this story is autobiographical, in whole or part.” So why does she bring the issue up? I frequently found myself wishing that she’d had more confidence, either to break through her skittishness surrounding Hansberry’s queerness or simply to devote the book to her adulation for Hansberry’s work.

Perry may not have written an exceptionally satisfying book, but she has undoubtedly written a necessary one. I have often bemoaned the suspicious absence of so many transformative minority lives from the annals of American theater history, among them Lloyd Richards, who went on from directing “A Raisin in the Sun” on Broadway to virtually revolutionizing the landscape of American playwriting during the remainder of the 20th century; Ellen Stewart, the visionary founder of LaMaMa, a key player in the professionalization of the American avant-garde and the redevelopment of the East Village; as well as the embarrassingly underappreciated playwright and actress Alice Childress.

Perry alludes to a more comprehensive Hansberry biography apparently in the works by Margaret Wilkerson, who is widely recognized as the leading Hansberry scholar. This is good news to those of us to whom a full reckoning of Hansberry’s life and power has seemed like a dream too long deferred.