It is not Hans Sloane who has been erased from history, but his slaves

The founder of the British Museum witnessed and then became part of a system ruled by terror. It’s right to remove him from his pedestal 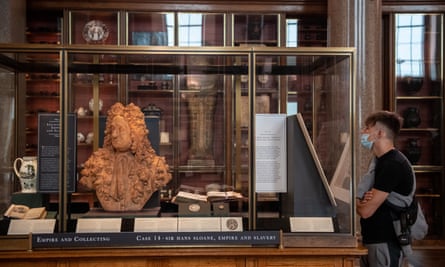 The supposed victim of historical erasure last week was Hans Sloane, the wealthy physician and naturalist whose collection of artefacts formed the nucleus of what became the British Museum. Accusations that the museum was rewriting history arose when it was reported that a bust of Sloane had been taken off its pedestal and moved, literally just a few metres, so it could be put on display inside a case with other objects. This new display made it possible for the museum to explain the links between Sloane, his collection and slavery.

In less hysterical times, a minor act of curatorial reinterpretation and recontextualisation would be of little interest outside the museum world. Instead, it sparked yet another confected outbreak of needless hostilities in Britain’s ongoing History Wars. Writing in the Spectator, Charles Moore complained that the bust of Sloane had been “locked in a display cabinet”, hardly a unique fate for an artefact held by the British Museum. Although having never thought it a good idea to test if the cabinets in the museum are indeed locked, I am not in a position to determine if the bust of Sloane has been singled out for special treatment.

Little of this, in reality, has much to do with Sloane or even with the British Museum and we are not at the beginning of some Orwellian age of historical erasure. Rather, Britain is gradually coming to the end of a very different and highly effective process of historical erasure that has endured for centuries. What bothers critics of the museum is that the new display makes plain the fact that much of the wealth Sloane used to purchase his vast collection was derived from slavery.

Every contrivance has been deployed to distance Sloane from slavery.

As the wealth he accumulated from plantations in Jamaica came to him through marriage, it has been suggested that his involvement was merely tangential. Yet upon Sloane’s marriage to Elizabeth Langley Rose, one-third of the income from her plantations and her human property became his. In one of his letters, Sloane proudly talked of himself as a planter, the 18th-century euphemism for slave owner.

Those who have felt the sudden need to write hagiographies of Sloane have attempted to portray him as an almost accidental beneficiary of slavery, yet he not only grew rich from the sugar shipped from his wife’s Jamaican plantations, he actively invested in the slave trading South Sea Company. No matter how much we are asked to look only at his talents as a physician and his passion for botany and collecting, the fact remains that much of the money Sloane used to purchase the objects that today lie within our national museum came from the murderous exploitation of African men, women and children.

Sloane’s achievements remain undimmed, but while he stood on a pedestal the significance of slavery to his life and to his collection was rendered invisible. Acknowledging this unpleasant reality is all the museum has sought to do. Many want it to go much further in confronting the role of both slavery and imperialism in its history and the British national story.

Those who grew rich on slavery and the slave trade were not neutral and no achievement or act of philanthropy justifies airbrushing their involvement from history. This is because forgetting slavery means forgetting its victims. As a nation, we still have only a dim understanding of the slave system that funded Sloane’s collecting. Ironically, one of the sources we can turn to in order to learn more is his own accounts of late 17th-century Jamaica.

The system he witnessed and wrote about was one in which human beings were worked to death. One in which enslaved people suffered and even died from malnutrition, as the economics of the slave trade meant that it was cheaper, at times, to starve people and then replace them than it was to provide them with food.

Sloane witnessed and later became part of a system ruled by terror. He saw how enslaved people who had risen up were burnt to death, castrated or mutilated, punishments he regarded as “merited”.

If these horrific details of the abused and commoditised lives are unfamiliar to most of us today, it is because they, not Hans Sloane, have been the focus of a genuine process of historical erasure. Last week, those who would rather we kept it that way expressed their outrage that the memory of the victims of slavery was allowed to intrude into their fairytale version of British history. Taking Sloane off his pedestal and setting him within historical reality is not an act of erasure – it is a small act of recognition.

David Olusoga is a historian and broadcaster.