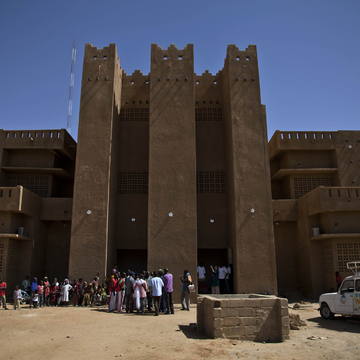 The dramatic 17-m pyramidal structure of the Tomb of Askia was built by Askia Mohamed, the Emperor of Songhai, in 1495 in his capital Gao.

It bears testimony to the power and riches of the empire that flourished in the 15th and 16th centuries through its control of the trans-Saharan trade, notably in salt and gold. It is also a fine example of the monumental mud-building traditions of the West African Sahel. The complex, including the pyramidal tomb, two flat-roofed mosque buildings, the mosque cemetery and the open-air assembly ground, was built when Gao became the capital of the Songhai Empire and after Askia Mohamed had returned from Mecca and made Islam the official religion of the empire.

Located at the gateway to the Sahara desert, within the confines of the fertile zone of the Sudan  and in an exceptionally  propitious site near to the river, Timbuktu is one of the cities of Africa whose name is the most heavily charged with history.

Founded in the 5th century, the economic and cultural apogee of Timbuktu came about during the 15th and 16th centuries. It was an important centre for the diffusion of Islamic culture with the University of Sankore, with 180 Koranic schools and 25,000 students. It was also a crossroads and an important market place where the trading of manuscripts was negotiated,  and salt from Teghaza in the north, gold was sold, and cattle and grain from the south.

The Djingareyber Mosque, the initial construction of which dates back to Sultan Kankan Moussa, returning from a pilgrimage to Mecca, was rebuilt and enlarged between 1570 and 1583 by the Imam Al Aqib, the Qadi of Timbuktu, who added all the southern part and the wall surrounding the cemetery located to the west. The central minaret dominates the city and is one of the most visible landmarks of the urban landscape of Timbuktu.

Built in the 14th century, the Sankore Mosque was, like the Djingareyber Mosque, restored by the Imam Al Aqib between 1578 and 1582. He had the sanctuary demolished and rebuilt according to the dimensions of the Kaaba of the Mecca.

The Sidi Yahia Mosque, to the south of the Sankore Mosque, was built around 1400 by the marabout Sheik El Moktar Hamalla in anticipation of a holy man who appeared forty years later in the person of Cherif Sidi Yahia, who was then chosen as Imam. The mosque was restored in 1577-1578 by the Imam Al Aqib.

The three big Mosques of Djingareyber, Sankore and Sidi Yahia, sixteen mausoleums and holy public places, still bear witness to this prestigious past. The mosques are exceptional examples of earthen architecture and of traditional maintenance techniques, which continue to the present time.

Criterion (ii): The mosques and holy places of Timbuktu have played an essential role in the spread of Islam in Africa at an early period.

Criterion (iv): The three great mosques of Timbuktu, restored by the Qadi Al Aqib in the 16th century, bear witness to the golden age of the intellectual and spiritual capital at the end of the Askia dynasty.

Criterion (v): The three mosques and mausoleums are outstanding witnesses to the urban establishment of Timbuktu, its important role of commercial, spiritual and cultural centre on the southern trans-Saharan trading route, and its traditional characteristic construction techniques. Their environment has now become very vulnerable under the impact of irreversible change.

The three mosques and the sixteen mausoleums comprising the property are a cliché of the former great city of Timbuktu that, in the 16th century, numbered 100,000 inhabitants. The vestiges of urban fabric are essential for their context. However, as indicated at the time of inscription of the property, rampant urbanization which is rife in Timbuktu, as in Djenne, is particularly threatening to the architecture, and the large public squares and markets. Contemporary structures have made irretrievable breaches in the original parcelling and obviously exceed the scale of the traditional buildings. This process is ongoing and most recently a new very large institute was built on one of the public squares, compromising the integrity of the Sankore Mosque. Urban development pressures, associated with the lack of maintenance and flooding, resulting from the heavy rains, threaten the coherence and integrity of the urban fabric and its relation to the property.

The three mosques are stable but the mausoleums require maintenance, as they are fragile and vulnerable in the face of irreversible changes in the climate and urban fabric.

The three mosques retain their value in architectural terms, traditional construction techniques associated to present-day maintenance, and their use. However, the Sankore Mosque has lost a part of the public square that was associated with it following the construction of the new Ahmed Baba Centre. Following this construction, the status of the mosque in the urban context and part of its signification have been compromised and require review and reconsideration.

Overall, because of the threat from the fundamental changes to the traditional architecture and the vestiges of the old city, the mosques and mausoleums risk losing their capacity to dominate their environment and to stand as witnesses to the once prestigious past of Timbuktu.